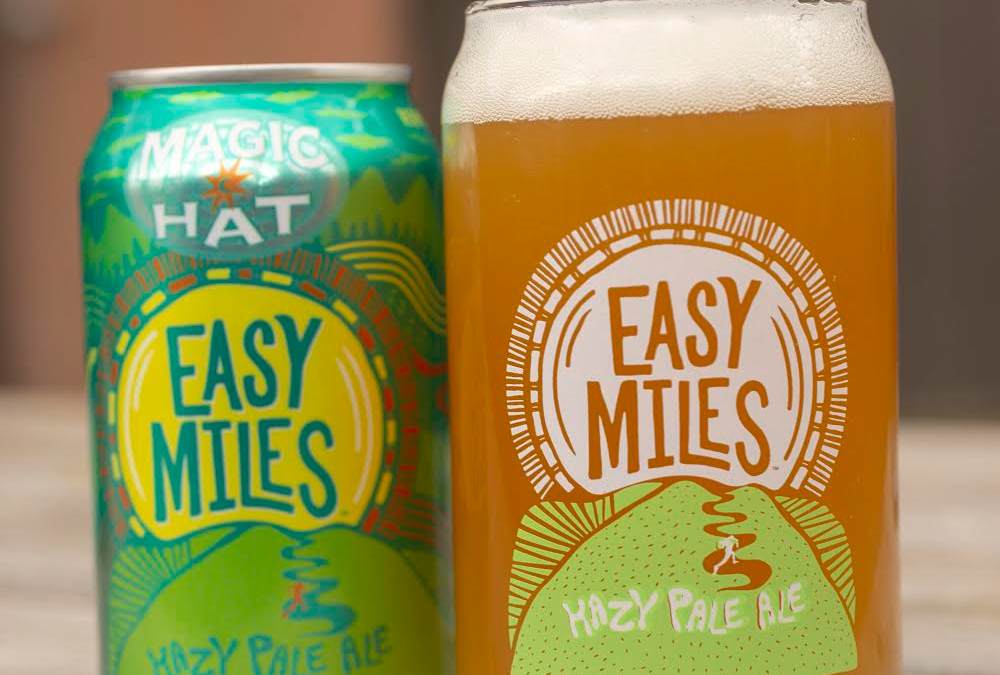 PRESS RELEASE / November 6, 2019 (South Burlington, VT​) – The Magic Hat Brewing Company has announced a new and exhilarating year-round endeavor: ​Easy Miles Hazy Pale Ale​. Inspired by those who rarely stop and barely slow down, Easy Miles is brewed for those whose thirst climbs up the hills and over yonder.

A Hazy Pale for the Dusty Trail

Brewers and regular humans alike know that exploring your limits can induce a great thirst that can be hard to quench with regular beers alone. It’s a non-stop, where will the next foot drop kind of op, and savoring the flavors of life is your reward. The brewers at Magic Hat realized that, sometimes, a few Easy Miles are all you need to put a little spring in your step.

Easy Miles is silky smooth thanks to wheat malt and oats, and its juicy, tropical hop notes of lemon, orange and mango come courtesy of a hopping and dry-hopping of Mosaic, Huell Melon and Lemon Drop hops.

Like everything on earth, Easy Miles is the result of mindful evolution. “We started brewing hazy pales on our pilot system a couple of years ago, and kept tweaking the recipe, each time bringing it a little closer to perfection,” said Chris Rockwood, head brewer at Magic Hat. “After miles of experimentation, we landed on this sessionable, juicy pale ale with all the flavor and barely any bitterness to speak of.” Landing at 5.2% ABV and 32 IBUs, Easy Miles is intended to be enjoyed for many miles.

Easy Miles will hit the beer trail on draft and in 6-packs of 12-ounce cans starting in November. The beer will be available year-round in most of Magic Hat’s distribution footprint. Thirsty explorers can find this hazy pale using Magic Hat’s Sip Code Locator® at magichat.net/sipcode.

The Magic Hat Brewery has been putting a performance into every bottle of beer since 1994. Today, the South Burlington, VT-based brewery puts out upwards of 175,000 barrels each year, and the brewing process, in all its strange and satisfying glory, has never been more accessible. WWW.MAGICHAT.NET