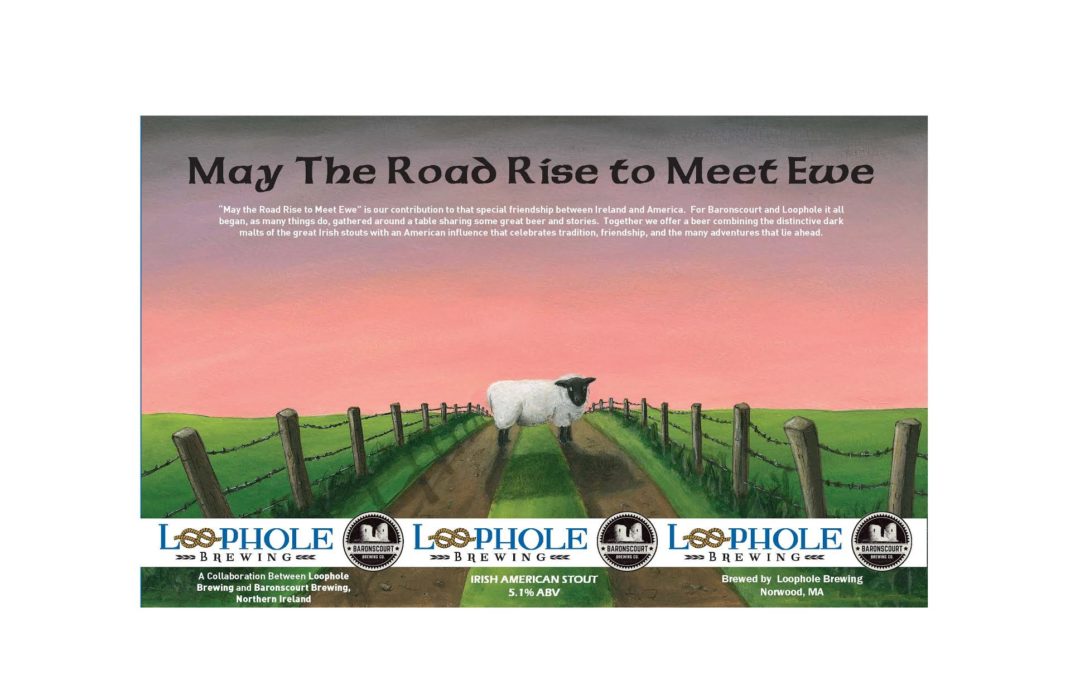 PRESS RELEASE / February 18, 2020 (Springfield, MA) – Loophole Brewing of Massachusetts and Baronscourt Brewing Company of Tyrone, Northern Ireland today announced their international collaboration. The collaboration was borne out of an Ireland Northwest Trade & Investment Mission in 2018 in which John Wauchob, Director and Brewer of Baronscourt, had the opportunity to meet a number of people involved in Massachusetts’ craft beer industry including Loophole Brewing.

Baronscourt Brewing Company is a family run brewery set in the idyllic countryside of Northwest Ireland. In addition to their top quality beers, Baronscourt boasts a zero carbon footprint. Loophole Brewing is based in Massachusetts and in the process of building out its brewery which, in addition to the Loophole Brewing brand, will offer small batch contract brewing to the region’s craft brewers.

The collaboration, dubbed “May the Road Rise to Meet Ewe,” recalls the Irish Blessing known throughout the region’s Irish American culture with a nod towards Baronscourt’s “Black Sheep Stout,” the foundation for the stout collaboration.

The label, designed by local artist Jesse Morgan, contains a description that speaks to the origins and inspiration of the Irish American Stout upon which the two breweries have collaborated:

“’May the Road Rise to Meet Ewe’ is our contribution to that special friendship between Ireland and America. For Baronscourt and Loophole it all began, as many things do, gathered around a table sharing some great beer and stories. Together we offer a beer combining the distinctive dark malts of the great Irish stouts with an American influence that celebrates tradition, friendship, and the many adventures that lie ahead.”

The two breweries also announced a series of events for the collaboration coinciding with Mass Beer Week (March 7 – 14) including a special event at the John Boyle O’Reilly Club in Springfield on Thursday, March 12. More details for the events will follow.

A very limited quantity of the collaboration has been produced and is currently being pre-sold, in anticipation that it will quickly be sold out. Loophole products are distributed through Berkshire Brewing Company. Orders can be placed by contacting Berkshire or through Loophole by emailing Contact@LoopholeBrewingServices.com.

Loophole Brewing Services exists to meet the needs of craft brewers.  Whether that need is a small run of a seasonal release or housing high volume production of a flagship brew, Loophole Brewing can assist. Our packaging facilities provide the necessary flexibility brewers need to distribute their product and our in house tap room provides a prime location for the beer brewed at Loophole to be available to the public.

Baronscourt Brewing Co. is a family-run farm-based brewery set in the idyllic countryside of Baronscourt in the North West of Ireland. The founders John and Adam are passionate about producing high-end hand-craftedartisan beer. Their aim is to create a curveball of premium craft beer, not mainstream. A huge part of our brewery is producing top quality beer that pairs exceptionally well with food. We feel that a great beer accentuates the flavours of the food it is paired with and thus creates a surreal dining experience. A unique fact about our brewery is that our beers are produced using locally sourced ingredients and we are one of the first craft beer producers with a Zero Carbon footprint.