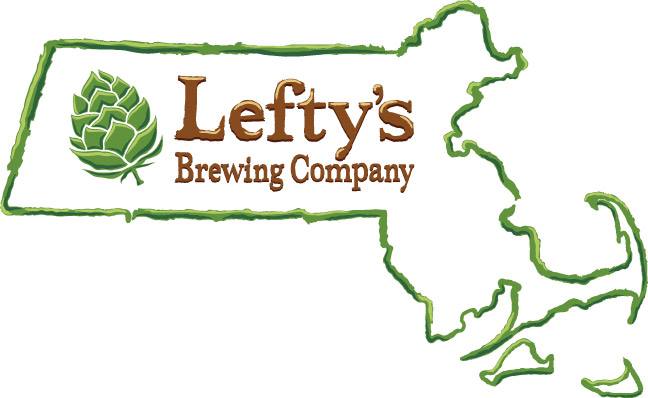 Western Mass. will get another taproom when Lefty’s Brewing in Greenfield debuts its new space Friday, doors open at noon. Final approval from inspectors came yesterday, and co-founders Bill & Melissa Goldfarb quickly shared the news on Facebook, and through their website taproom page. Below is their most recent update:

“After months of months of construction, dedication, and determination, our tap room is now opening! We are super excited to share this new space with you, where we can all sit down and enjoy some pints, flights, and snacks! We even have a rotating food truck schedule along with shelves of goodies to enjoy!” 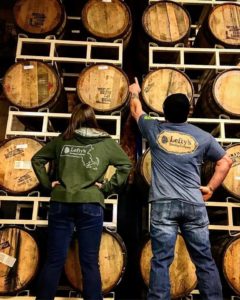 Fans of Lefty’s highly heralded barrel-aged beers will now be able to enjoy them right there at the brewery.

The centerpiece of the new space is a beautiful and unique 18-foot custom made live edge Sycamore bar, along with matching tables. Custom made flight boards were created at Gill CC Woodworks and a hand carved pub sign, as well as much of the wall art, were created by Foothills Wood Carving in Conway.

Guests will be treated to a variety of treats and snacks from local vendors including Black Cow Burger Bar and Hagar’s Farm Market. And of course there will be beer: 13 tap lines will be flowing for flights, full and half pours, and growler or crowler fills. Barrel-aged Wedding Daze, an Imperial Stout, will be pouring on a nitro tap.

The fast-growing and award-winng micro brewery operates on a 15-barrel system and will produce some 3,000 barrels this year, with production expected to continue to rise. An anchor for the Franklin County beer scene, they opened in 2010 and brew a wide variety of creative brews including a Graham Cracker Porter, a Barrel-Aged Scotch Ale, and an IPA called Wicked Sticky, which uses 500 pounds of Rakau wet hops from Four Star Farms in Northfield.

Located at the adjacent space in their existing brewery at 301 Wells Street, the taproom hours will be Wednesday & Thursday 3:00 to 8:00, Friday & Saturday noon to 9:00 and Sunday noon to 6:00. On-street parking, as well as lot spaces on either side of the building are available, but car pooling is encouraged: “Beer is always more enjoyable with friends,” says their taproom page.