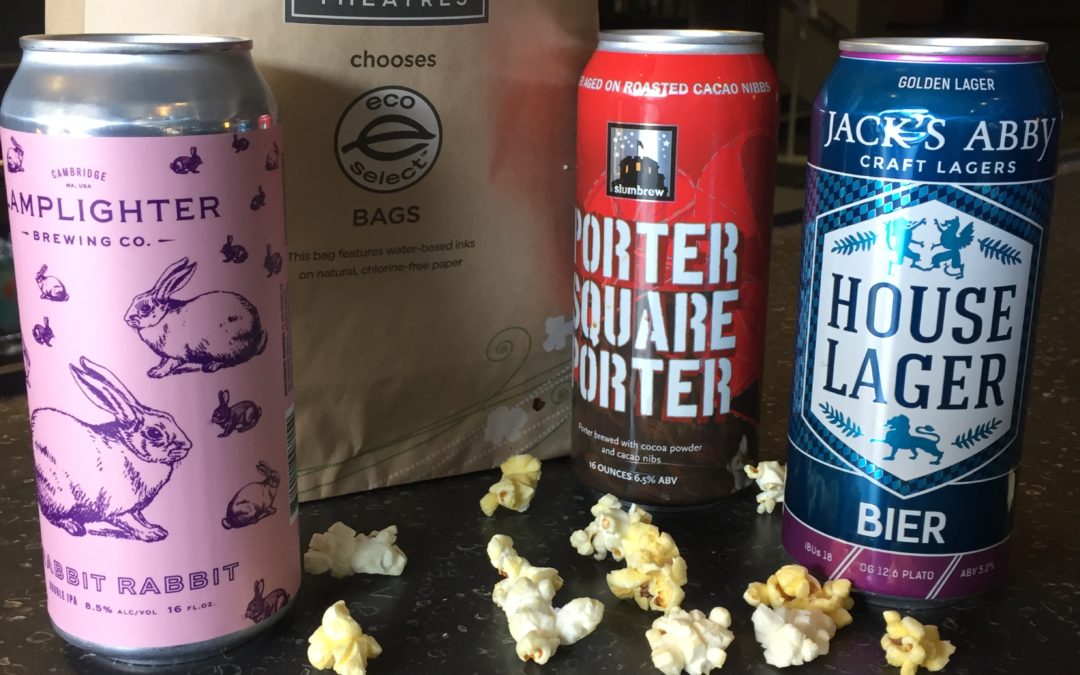 On a cold, windy Friday night in December we’re warm and comfy in our luxurious chairs at the Kendall Square Cinema in Cambridge as we watch likely Oscar nominee Darkest Hour and sip the latest can release from nearby Lamplighter Brewing. A couple of craft beer-loving movie buffs could get used to this. “We’ve always prided ourselves on being champions of Independent Film,” General Manager Howie Sandler told us. “I figured it was time to do the same for independent breweries. It seems like a perfect match.”

Shortly after the theater started selling alcohol in May, Sandler, an ardent craft drinker himself, convinced the higher-ups to let him oversee the beer selection with the same level of discretion used to choose films. From an initial assortment of just six offerings, all but one being macro brands, he began adding local craft brewers to the mix. One of the first was newcomer Lamplighter Brewing, located less than a mile away and generating a lot of buzz on the local beer scene. “We were lucky enough to land an account with them before demand for their beers went through the roof,” said Sandler. “We get a delivery of their latest can releases every Wednesday. They’re our top seller.”

He still keeps a few old school brands on hand, like Guinness and Narragansett, but most have been replaced with the likes of local brewers Slumbrew, Jack’s Abby, Harpoon, and Barrel House Z. In all, 16 different brands are now available, with some, like Cambridge Brewing Company, offering several styles. “People love the selection,” says Sandler, who often overhears excited conversations at the concessions counter. “They rave about how many great choices there are.”

You’d expect to hear movie goers at a place like the Kendall Square Cinema raving about the movies, but to hear such enthusiasm regarding beer is a rarity at most movie houses. Some of the premium theaters have begun selling alcohol in recent years, as have other Landmark (parent company of the Kendall) locations, but none have raised their game to the same level that Sandler has in Cambridge. Most are still selling macro beer from an AB-InBev or MillerCoors distributor.

With Oscar season right around the corner, movie buffs and beer aficionados alike should have plenty to be excited about, including the Kendall’s exclusive Massachusetts premier of Steven Spielberg’s The Post starting January 5th. It’s been getting a lot of pre-release buzz. No word yet on what Lamplighter will be releasing that week, but Sandler is likely to hear a lot of buzz about that too.