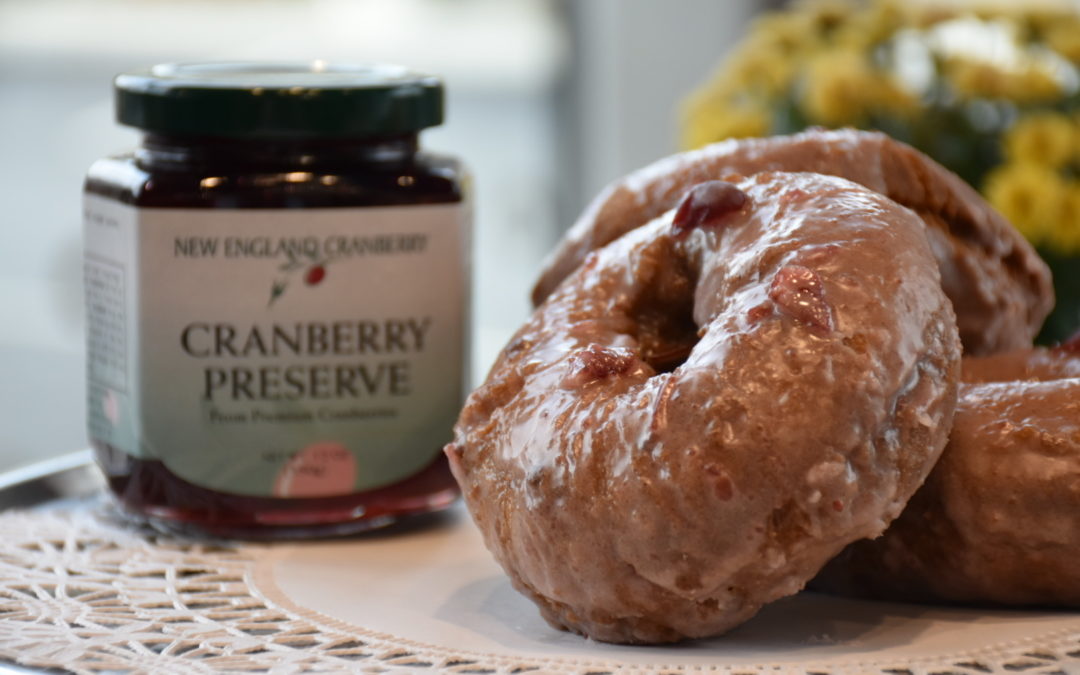 Welcome the Holiday Season with the Limited-Edition Flavors

Available During the Month of November at Kane’s

PRESS RELESE / October 31, 2019 (Boston, MA) – Just in time for the holidays, Kane’s Donuts has created yet another limited-edition seasonal treat, an Apple Cider Donut with a Cran-Apple Glaze, using Lynn-based New England Cranberry’s Cranberry Preserve. This delectable, holiday treat will be available through the month of November at all Kane’s locations: Kane’s Legacy (120 Lincoln Ave. in Saugus); Kane’s Flagship (1575 Broadway, on Rt. 1 at Essex Landing in Saugus), and Kane’s Downtown (90 Oliver St. in Boston’s Financial District, at International Place).

Thanksgiving food is delicious, that much is hard to disagree with, but what’s Thanksgiving without sweet treats? Featuring New England Cranberry’s Cranberry Preserve, Kane’s Apple Cider Donut with a Cran-Apple Glaze is something you’ll need to add to your holiday menu. The Apple Cider Donut with a Cran-Apple Glaze is a cake-style donut featuring fresh apple cider and more than a hint of cinnamon in the batter. It’s slathered (by hand) in Kane’s signature honey glaze that has been infused with New England Cranberry Company’s cranberry preserve.

“New England Cranberry and Kane’s are fortunate to share a love for working with and supporting businesses in and around Greater Boston, and much like Kane’s, we are also a family business rooted in tradition and authenticity,” said New England Cranberry Brand’s Co-Owner Allison Goldberg. “I’m thankful for the opportunity to expose Kane’s loyal customers to our delicious Cranberry Preserve for the second year in a row.”

For cozy fall days, Kane’s will also feature other seasonal November flavors of the month – Pumpkin Pie and Cranberry-Orange Fritter. The Pumpkin Pie donut is a cake-style donut with robust pumpkin spices, dipped in a cheesecake glaze, and piped with rich, pumpkin cheesecake filling. It’s topped with a crumble of gingersnap and toasted pepitas for perfect texture and crunch. The Cranberry-Orange Fritter is a fritter style donut with real orange fruit and whole Cape Cod cranberries, dipped in Kane’s signature honey glaze and lightly drizzled with orange icing.  The gluten-free options for November will repeat the wildly popular Pumpkin Spice and Apple Cider, both cake-style, and both dipped in Kanes’ signature honey glaze. The cupcake of the month will be a Pumpkin Spice Cupcake, a spiced cupcake made with real pumpkin and topped with cream cheese frosting.

“The Cranberry Preserve worked perfectly for our November Cran-Apple glaze – it’s a local taste of the holiday season that we hope our customers enjoy!” added Kane’s Co-Owner and President Paul Delios.