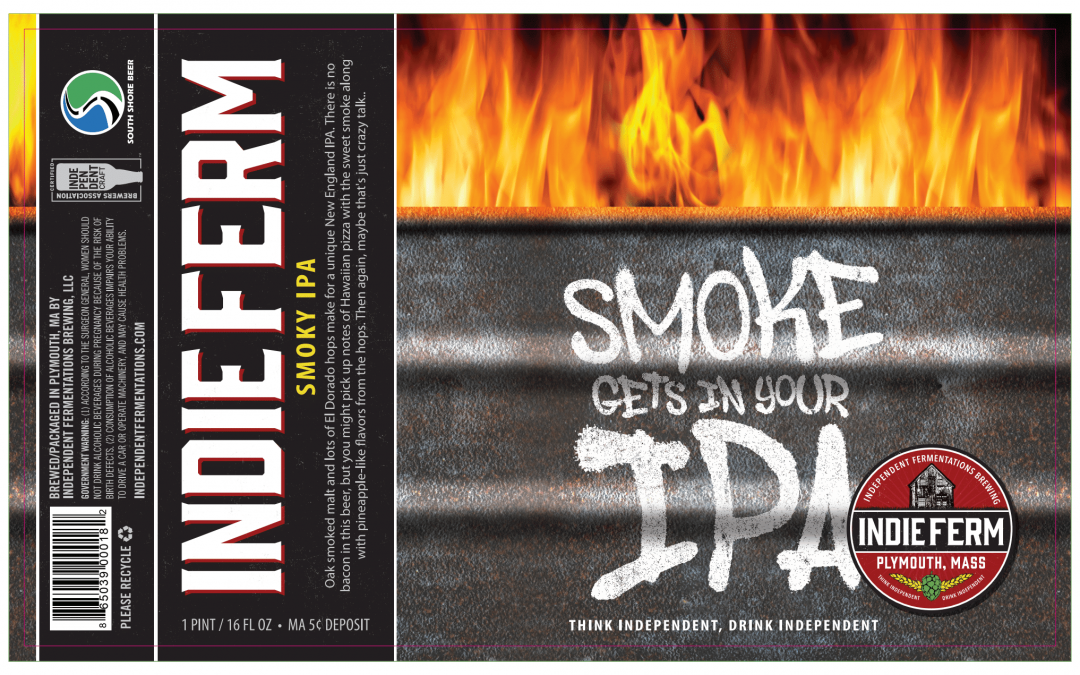 PRESS RELEASE / March 25, 2021 (Plymouth, MA) – Indie Ferm has a new beer coming – Smoke Gets In Your IPA. It is a NEIPA with a soft smoky background thanks to oak-smoked wheat malt (the same malt that gives our Gratzer its smoky character). Lots of El dorado hops provide the juiciness. It will be 5.7% ABV and 42 IBU. The label, a hobo barrel fire, was designed by Jim Dumas at Fat Bassett. And as you probably know, wherever you stand, the smoke gets in your eyes. Expect to see it in stores and at the tap room in two weeks.

We reopened the beer garden a couple of weeks ago and have been very busy, at least while the weather has been good. Rainy days, not so much. But we aren’t ready to go back inside yet. Ellen Wilson from Free Rangers Farm does the pop up kitchen most days, and we have pretzels and hot dogs available as well.

Independent Fermentations Brewing (aka IndieFerm) specializes in making craft beers with locally grown ingredients.  Many of our beers are inspired by the Belgian farmhouse brewing tradition but we also make other styles.  We brew what we like to drink and that covers a lot of territory.

We primarily use Massachusetts-made barley, wheat, and rye malts as well as malt from farmers and maltsters around the Northeast that share our ethic of keeping it local and independent.  Most of our hops come from Massachusetts but there are some varieties that we like that simply don’t grow here. So we supplement with other sources when we need to.  On average, our beers are brewed with about 80% locally sourced ingredients.  It costs us more this way, but it is worth it to keep the money local and support people who work and think like we do.  We believe in making local beer with local ingredients.  Help us fight the mono-culture: “Think Independent, Drink Independent.”