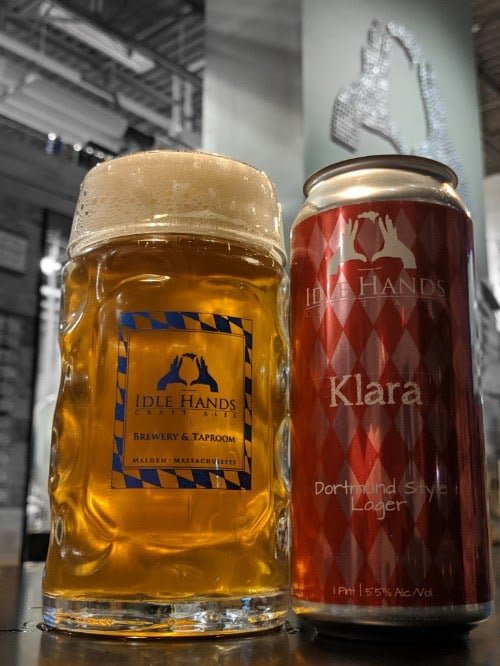 PRESS RELEASE / October 31, 2018 (Malden, MA) – I am beyond excited to see Klara return to the taps this Wednesday for a couple of reasons. The first being that I absolutely love this beer for its combination of malt character and interesting, drying minerality that you don’t normally find in lagers. And second for the nostalgic feeling I get when I’m drinking it.

For those of you who are unfamiliar with Dortmunder lagers, let me introduce you to them. They hail from the town and surrounding area of Dortmund, Germany which is a very industrial and mining heavy area of the country. Dortmunder lagers were originally brewed to slake the thirst of the gritty workers after a long day in the mines and as such it was brewed to strength, typically 5.5% and above to help ease the pain of a long, hard day of work. The workers demanded a helles style lager that you would normally find in Southern Germany. However, the high mineral content of their local water forced the local brewers to adapt and what resulted was a more mineral laden golden lager that had a unique mineral bite to it.  The brewers balanced this by adding more malt character and hops than you would normally find in a helles and the Dortmund lager was born.

I personally find this dichotomy between the malt and the minerality very interesting as it helps the beer to not come across with a “flabby” finish but instead with a nice sharp end which makes you want to immediately take another sip.

We brew Klara with 100% German malts that are a mix of pils malt, munich malt and some melanoidin malt to add complexity. We then augment our water with a heavy hand of gypsum to provide that mineral character.  It is hopped with the famous trio of Mittlefruh, Tettnang and Hersbrucker to give it pleasant noble/herbal notes that go well with the heavier malt profile.  Think artisanal bread with a thick, chewy crust meets a strong mineral water.

Klara was the 2nd lager we ever brewed at Idle Hands (back in Everett) when we were still perfecting our lager game. It was brewed 100% for selfish reasons as this style was one that really got me into craft beer. It’s definitely not a style you normally see (particularly back in 1996) but I had my first taste of Great Lakes Dortmund Gold on a long business trip to the Cleveland area and after drinking several pints of it at a local watering hole, knew it was something special.  It took me over 15 years since that trip to brew my own but when I drink Klara it brings me back to that first business trip out of school when you’re travelling on the company dime and feel like your finally an adult living on your own, working a professional job and just living life.

Pair Klara with a crusty bread spread with your favorite soft cheese complemented with fresh strawberries on the side. It also goes well with any of the classic German sausages; knockwurst, bratwurst, etc. particularly if served on a pretzel roll. — Idle Hands Founder and President Chris Tkach

About Idle Hands Craft Ales Belgian beer dates back to the Middle Ages when it was only produced in monasteries. Over 500 years and 500 beers later, the depth and breadth of Belgian beers is tremendous with most of the popular styles and brands still brewed in Belgium. Today, Belgian beers are frequently paired with a variety of food offerings to complement and enhance the flavors of both.

As the rise of the craft beer and locavore movements coincide, we hope that Idle Hands becomes a local favorite and mainstay. We offer an array of Belgian beers to provide refreshment, complement a meal, and most importantly, keep those idle hands from making the devil’s playground!

We’re a short, four minute walk from the Malden Center stop on the MBTA Orange Line (20 minute ride from downtown Boston) and Haverhill Commuter Rail (10 minute ride from North Station). Please visit us at our Greater Boston Taproom and Brewery 89 Commercial Street Malden, MA 02148 If the parking lot surrounding our building is full, overflow parking is available one block away at Callahan Park (the lot next to Pisa Pizza) near the intersection of Charles Street and Pearl Street.