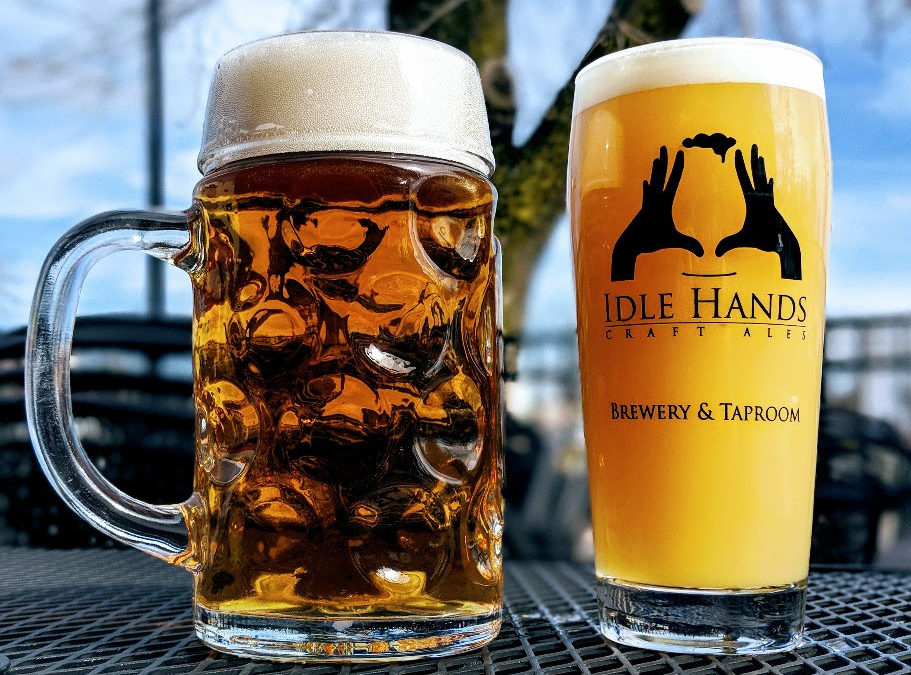 Idle Hands Craft Ales is releasing two beers in cans this week. The first is its flagship New England IPA, Four Seam, but with a small twist – Galaxy hops instead of Citra. The second, Emelyn, a zwickelbier, is a “young” unfiltered offering brewed in the style of a vienna lager and distributed in cans for the first time. It features a touch of toasty malt character and is ​balanced by the fruity notes of the yeast that has been left in suspension.

From lead brewer Brett Bauer: “what is a zwickelbier?” A question we hear often from first time visitors or even veteran fans. Over the past few years, more and more breweries are starting to produce their own, which I find quite interesting as it can be a very open ended style. From​ my understanding, a zwickelbier was named for the sample port found on a fermentor called a “zwickel.”
In German tradition, when you would order a zwickelbier at a brewery or brewpub, your bartender wouldn’t go to the tap but instead would go into the cellar and pour you a not yet fully aged (but finished fermenting) fresh lager right from the primary fermentor (in our case, a conical fermentor, or the one’s with a cone on the bottom).  Now this could be any style of lager.  Some could do a zwickel pilsner, some could make a zwickel dunkel; ours leans more towards a vienna style zwickel.  My line in the sand for a zwickelbier is that once the beer is transferred into a secondary tank (like a brite tank), it’s now a kellerbier (keller meaning “young”).  It’s a young lager, but does not have that same straight from the primary fermentor freshness.
What makes Emelyn so special to us is that we try to capture that same freshness as best we can.  As soon as primary fermentation is complete and the beer has rested to absorb any off-flavor producing compounds, we carefully bring down the tanks temperature to 32F while keeping continuous CO2 pressure on the surface of the beer.  With low temperatures and constant pressure, the beer is carbonated slowly creating a softer and less prickly carbonation.  From there, we keg (and tomorrow for the first time CAN) the beer right from the fermentor capturing all that soft carbonation and a slight amount of yeast left in suspension to create a faint haze but a rich and hearty body.
It was the first beer we brewed on our Malden brewhouse and it still puts a wide smile on my face whenever I get to brew it, pour a mug for a Taproom visitor and ESPECIALLY when I get to pour myself a fresh mug right from the zwickel.  So please, come join us for the freshest possible lager we can deliver.