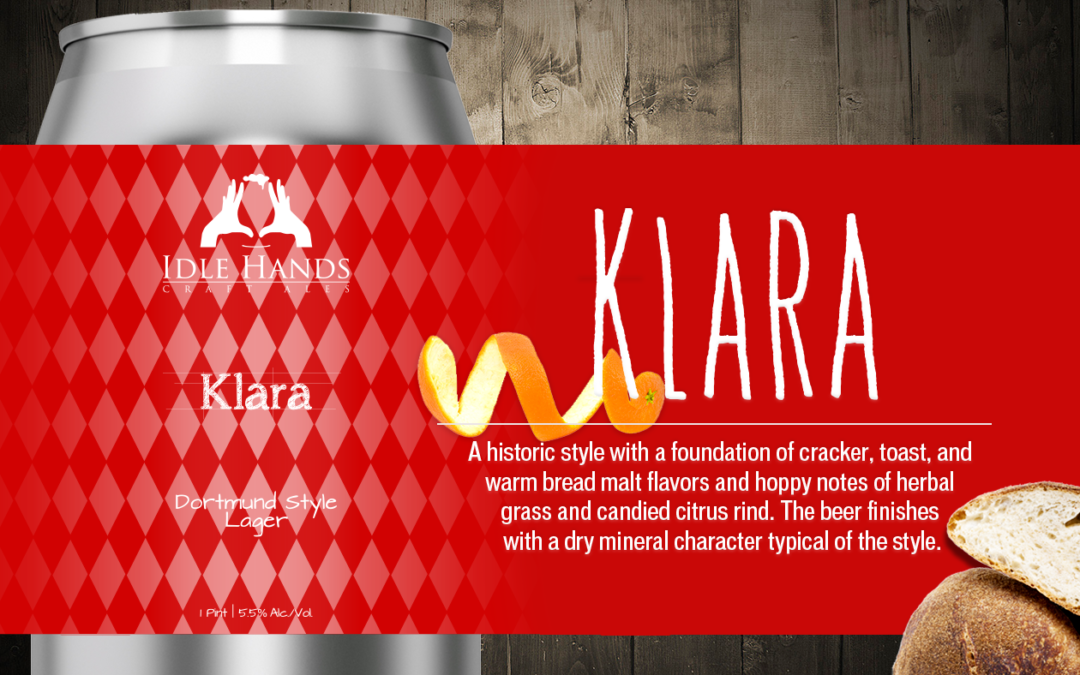 PRESS RELEASE / MALDEN, Mass. – November 17, 2017 – Idle Hands Craft Ales is releasing Klara, its Dortmund-Style lager, in 16 ounce cans for the first time on Monday, November 20, at 3pm in its taproom.

Dortmunder pale lagers were first brewed in the Ruhr District of Germany in the late 19th century, with the name stemming from Dortmund, the District’s largest city. The Ruhr District was the heart of industrial production in Germany, containing hundreds of coal pits and steel factories. Dortmunders were the preferred beer of the blue collar industrial workers of the region. It provided them with a beer slightly maltier and heavier, with a higher ABV, than the other beers available in Germany, such as the helles or pilsner. The local hard water used for brewing Dortmunders contained a high amount of sulfate, which gave the beer a minerally taste.

Idle Hands’ Klara pays homage to the historic Dortmund-style pale lager, staying loyal to the style’s classic taste with a foundation of cracker, toast, and warm bread malt flavors. It finishes with a dry mineral character that’s typical of the style which helps bring out the hoppy notes of herbal grass and candied citrus rind.

Klara will be available on draft starting Saturday, November 18, and in 4-packs of 16 oz. cans in the Idle Hands taproom the following Monday. Idle Hands only releases Klara once a year, so quantities are limited. The brewery will also release fresh cans of Four Seam, its flagship New England IPA, on Monday.

“Dortmund-style lagers aren’t the sexiest thing in beer at the moment, but given our focus on German lagers, Klara has always been an important beer for us because of its history,” said Chris Tkach. “We wanted to produce a lager in the true Dortmund-style, right down to the mineral finish. Though the style isn’t talked about heavily among beer crowds, we’ve received great feedback on Klara since we started brewing it back in 2014. People seem to enjoy its depth of flavors and its unique character amongst today’s lagers. We are looking forward to hoisting a few steins of it with everyone on Saturday.”