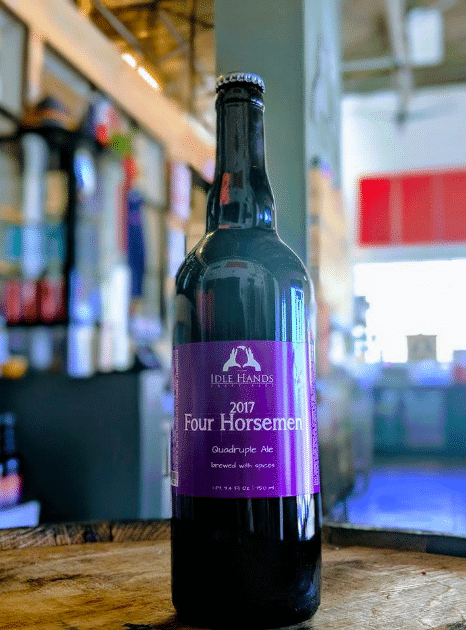 Traditionally released by Idle Hands in celebration of the culmination of the brewing year, it was intentionally left to condition longer in the bottles than in past years to help meld the complex flavors a bit more. This longer process brought out more of the beer’s plum, prune, fig, and raisin dark fruit character which form the foundation to support the citrus, gingerbread, and allspice notes.

Winter is still here and Four Horsemen is a big (13% ABV), bold beer that can help keep you warm on cold nights spent with friends and family.

Four Horsemen will be available in the Idle Hands Craft Ales taproom on draft and in bottles starting at 3pm on Friday, February 9.

“Four Horsemen is a great beer for this time of year,” said Chris Tkach, founder of Idle Hands Craft Ales. “The realization that winter isn’t leaving yet is setting in and a Belgian Quad can provide that comfort to a cold winter’s night that you’re looking for.”

Idle Hands Craft Ales was founded in 2010 by husband and wife team, Chris and Grace Tkach. Today, it focuses on producing a wide-array of craft beer with uncompromising quality. Its taproom in Malden, MA, is open seven days a week, serving fresh IPAs, lagers, sours, and more for visitors to drink on-site or take home. To learn more, visit www.idlehandscraftales.com. Find us on social media: Twitter, Facebook, and Instagram.