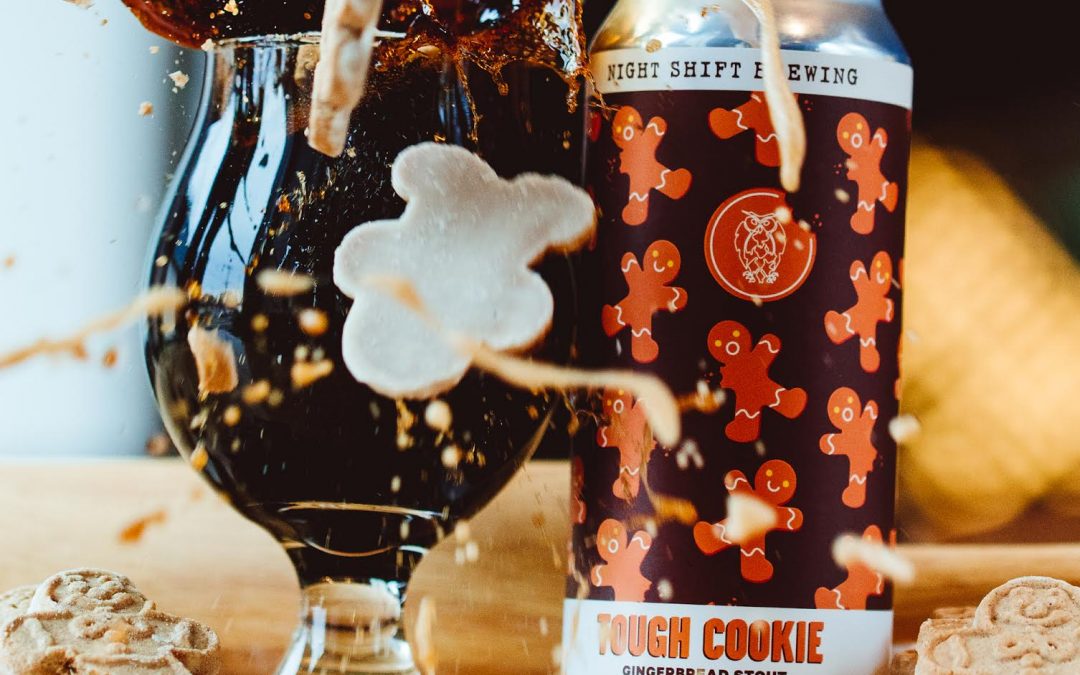 PRESS RELEASE / December 9, 2021 (Boston, MA) – Night Shift Brewing is pulling out all the holiday stops this month with a lineup of new beer releases and festive fun leading into the holidays. The new beer releases include: Tough Cookie, Stratasaurus, Cryoblast, and Haze Maze Batch #02.

Tough Cookie is the new 9% gingerbread cookie stout with everything you love about winter flavors – warming spice, hunt of vanilla and a bit of brown sugar. Available now at Night Shift Brewing Everett Taproom and Lovejoy Wharf locations and stores in MA and NH.

Cryoblast features only Cyro Hops, cryogenically frozen hop cones that offer extremely intense flavors and aromas. Cryoblast’s Idaho 7 Cryo and ekuanot Cryo deliver one of the most highly concentrated hop experiences Night Shift Brewing has ever made. At 9% ABV, this is super juicy with notes of soft wheat, tangerine and papaya. Available now at Night Shift Brewing Everett Taproom and Lovejoy Wharf locations and stores in MA and CT.

There are also plenty of reasons to hop on over to the Everett Taproom and Lovejoy Wharf locations this December with the Ugly Sweater Party: The Office Edition, Winter Holiday Market, Holiday Drag Lunch and Holiday Trivia With Geeks Who Drink.

Compete for all of the ugly sweater glory – or just sit and drink and judge all of the sweaters, which is equally as fun! At the Ugly Sweater: The Office Edition, the best holiday episodes of The Office will be queued up and ready to go, along with a fun beer flight inspired by characters from the show: Michael Scott – Nite Lite American light lager, Jim Halpert – Whirlpool hazy pale ale, Angela Martin – Ever Weisse sour with strawberry, kiwi and hibiscus, Dwight Schrute – Stratasaurus, Night Shift Brewing’s new IPA.

The Annex at the Everett Taproom will be transformed into a holiday market for one day only this season! Support local businesses and discover a variety of local artisans so you can give a one of a kind gift this season. Local vendors include: All She Wrote Books, Art Lab Everett, Barry’s Hot Sauce, Bullmoose Soft Goods, Charged Glassworks, Clay of the North, Coffee Bean Knitting, Dot Bee Co., JG Clay, Kaila Braley Pottery, Lionheart Confections, Ostara Birthwork & Botanicals, Tony’s Tulips, Tyed with Love, Workforce by Inseam. Brato will also be on site in addition to DJ Panda. The Night Shift Coffee cart will be in full effect as well with speciality hot cocoa for kids and eggnog lattes and chaiders for adults.

There’s no place like Lovejoy Wharf for the holidays! Drag queens and kings Kirbie Fullyloaded, Raya Sunshine, Famine, and MT Hart will be in the house. In addition to Lovejoy Wharf’s regular menu of small plates, salads, sandwiches and award winning Detroit style pizza there will also be some new lunch dishes such as: truffle fries with shaved fresh truffle and Parmesan, Prime Rib Sandwich 3 way with Night Shift Brewing’s Bennington oatmeal stout BBQ sauce, and a Belgium Waffle with artisanal chocolate. ‘Tis the season to be jolly so your best holiday sweater and attire are encouraged.  Tickets are $15 including your first drink are available at: https://www.eventbrite.com/e/holiday-drag-lunch-lovejoy-wharf-tickets-222013988817?mc_cid=6c7c274f82&mc_eid=617c2cecda

The folks from Geeks Who Drink are at the Everett Taproom every Monday evening testing the ability of the crowd to recall mostly useless facts. Grab some friends and come on down for a special holiday edition.

Night Shift Brewing has its roots in a small kitchen on Josephine Ave in Somerville, MA. In 2007, Co-Founders Rob, Mike, and Michael began homebrewing at night, making beers for friends and family that they hoped were more delicious than the commercial options on shelves. In 2012, the trio moved their hobby to a small Everett warehouse and launched the business. They relied on a “craft better” mindset and their passionate community of loyal customers to quickly grow their staff, production, and distribution in the local market. Today, Night Shift Brewing operates locations in Everett and Boston MA, and distributes beer throughout MA, CT, PA, NY, ME, and NH. It is currently one of the top 100 craft breweries in the country by volume. For more information, please visit www.nightshiftbrewing.com and follow along on Instagram @nightshiftbrewing, @nightshiftlovejoy, @owlsnestboston and @nightshiftcoffee.