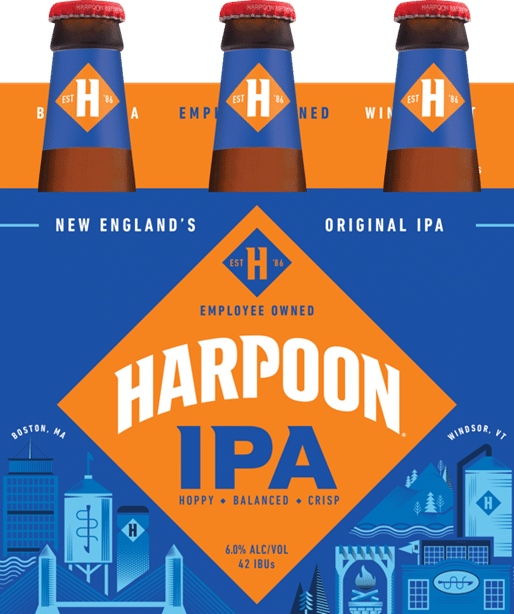 PRESS RELEASE / May 28, 2020 (Boston, MA) – Harpoon Brewery announced today that it’s giving its flagship IPA a makeover. While its recipe hasn’t changed, Harpoon IPA is getting bold new packaging that better reflects the fans who drink it and the employee owners who make it, complete with illustrated scenes of the two cities it calls home: Boston and Windsor, Vt.

Harpoon IPA was originally brewed in 1993 and was the first IPA brewed in New England during America’s craft beer revival – earning it the nickname of “New England’s Original IPA.” While most beer options back then were mass-produced pale lagers, Harpoon IPA was the first craft beer on the East Coast to put hops at the forefront. Since then, it’s continued to be the brewery’s most popular offering. The new can and bottle design brings this storied history to life.

“Harpoon IPA has been a fan favorite for years, and there’s a reason for that. It’s the beer we all reach for time and time again – from ball games to BBQs with friends – and we wanted its packaging to better reflect that sense of community and approachability,” said Dan Kenary, Harpoon’s CEO and co-founder. “The revamped packaging makes it loud and clear that Harpoon IPA is proud of its New England roots, while paying tribute to those who have enjoyed it – and helped brew it – for nearly three decades.”

In addition to the illustrations of each city, the new packaging boasts a more proud and prominent declaration that the brewery is “Employee Owned.” In 2014, Kenary decided it was time to make moves toward employee ownership and launched an Employee Stock Ownership Plan (ESOP). The ESOP gave 48 percent of Harpoon Brewery’s shares to the brewery’s employees. Not only did employee ownership allow brewery employees to share in the value of what they’d helped to build, it allowed the thirst for innovation of each of its employees to flourish. Today, Harpoon believes more than ever that good company makes a good company, something that’s more noticeably on display on the new Harpoon IPA packaging. 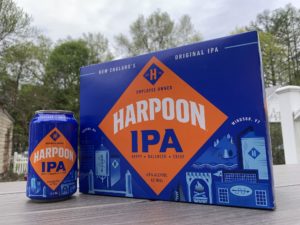 Classic components from the previous packaging are still intact – such as the arched “Harpoon,” the bright orange and blue colors, the Harpoon “H” and diamonds – but they’ve been reimagined in a bold and modern new layout.

A regional favorite and craft beer classic, Harpoon IPA is styled after an English IPA with distinctly American hops. At 6.0% ABV, it’s citrusy, balanced, and refreshing, making it feel right at home on the beaches of Cape Cod, Mass., the ski slopes of Vermont or in a Boston dive.

Its hometown ties are even more evident this year, as Harpoon IPA sales will benefit the Pan-Mass Challenge (PMC) and its fight against cancer. The Pan-Mass Challenge raises money for life-saving cancer research and treatment at Dana-Farber Cancer Institute through an annual bike-a-thon that crosses Massachusetts. Harpoon has been a proud PMC sponsor for 22 years, and this summer will take its partnership to a new level. During the month of July, a portion of proceeds from each case sold of Harpoon IPA will go directly to the PMC’s fundraising efforts.

Harpoon IPA is available on draft, in 6-packs and 12-packs everywhere Harpoon is sold. To find it near you, check out the Harpoon beer finder: https://www.harpoonbrewery.com/beer-finder/.