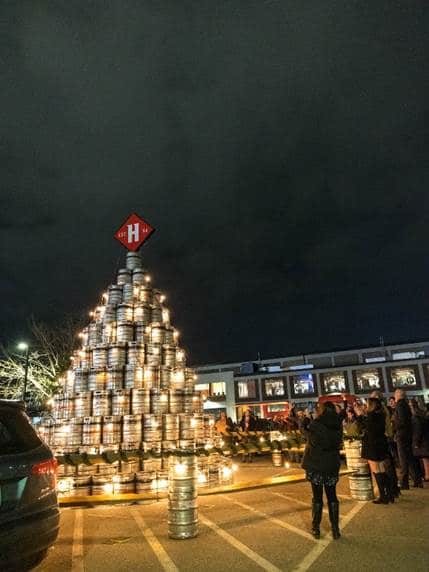 Fashioned from over 500 kegs, the “tree” will be lit every night through New Year’s Day

PRESS RELEASE / December 10, 2021 (Boston, MA) – Harpoon Brewery is putting their own spin on a classic holiday decoration. Bringing extra cheer to the Seaport this year, the brewery has created Boston’s official keg Christmas Tree for all to enjoy.

Located in the parking lot of the brewery, the “tree” is made up of 531 kegs crafted by the hands of Harpoon employees over the course of 3 days. Lit every evening from dusk to dawn, this special seasonal addition to the brewery will be on display through New Year’s Day.

In honor of the city of Boston’s official Christmas Tree lighting – gifted to the city every winter from the people of Nova Scotia – and the lighting of the new keg Christmas tree at the brewery, Harpoon has released From Nova Scotia with Love (’21 Edition). Inspired by a Bûche de Noël and brewed in collaboration with Nova Scotia-based Big Spruce Brewing, the 11% ABV Imperial Stout is brewed with caco, vanilla, cinnamon, nutmeg, juniper berries, and spruce tips. The beer is available now for a limited time, only on draft at Harpoon’s Beer Hall.