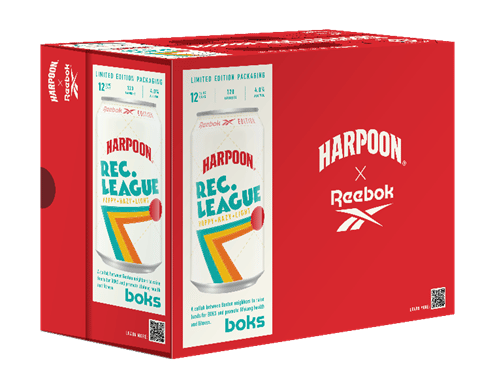 A portion of sales from the collaboration will go to BOKS, a program dedicated to promoting life-long health and fitness

PRESS RELEASE / June 21, 2022 (Boston, MA) – Only one thing beats crushing a 5K or winning the local rec. league championships: having that perfect can in hand to celebrate. That’s why today, Boston neighbors Harpoon Brewery and Reebok announce that they are coming together for a new collaboration: Harpoon Rec. League – The Reebok Edition, a co-branded release of the brewery’s low-cal, low-alcohol hoppy and hazy pale ale. The collaboration features the same recipe Harpoon fans know and love encased in a new fresh Reebok-inspired container, including cans sporting the Reebok logo and 12-pack packaging evoking the Reebok sneaker box design.

Sharing a common desire to celebrate human movement, the brands are uniting to raise funds for BOKS, a program dedicated to promoting life-long health and fitness. While supplies last a portion of sales for each purchase of the Harpoon Rec. League Reebok Edition 12-Pack, will go directly to BOKS to encourage movement in local youth communities.

“Rec. League was the first beer we created that both complements an active lifestyle and embodies our ‘love beer, love life’ moto,” said Dan Kenary, CEO and co-founder of Harpoon Brewery. “Partnering with Reebok, a brand dedicated to sports and fitness and the impact they have on peoples’ lives, made sense with them not only being our neighbor, but also their passion for giving back to our shared local community. We’re excited to be working with them and giving back to BOKS.”

“We are thrilled to support BOKS through this unique collaboration,” said Caroline Machen, VP of Global Marketing at Reebok Design Group. “We are excited to see the positive impact that this partnership will have on our community as Harpoon shares Reebok’s commitment of enhancing the lives of others.”

Harpoon Rec. League is brewed with unique ingredients like buckwheat kasha, which contains important minerals and B vitamins; chia seeds that are high in fiber, Omega-3 fatty acids and antioxidants; and Mediterranean sea salt that can act as a powerful source of electrolytes. Coming in at 4.0% ABV and only 120 calories per 12 oz. serving, it provides flavor and drinkability that won’t slow you down.

The Reebok Edition of Harpoon Rec. League will be available in 4-packs ($8.99) and 12-packs ($14.99) starting in July. It will be available on tap at both the Boston and Windsor, VT Tap Rooms and wherever Harpoon beers are distributed. For more information, check out the Harpoon beer finder: harpoonbrewery.com/beer-finder/. To shop Reebok’s collection of Floatride running shoes, visit: www.reebok.com/us/floatride-shoes.

Reebok is an iconic pioneering lifestyle brand with a rich and storied fitness heritage dating back to 1895. Founded on athletic footwear​ that changed the direction of sport, Reebok continues to introduce innovations that propel the industry forward. Today, Reebok sits at the intersection of active, lifestyle and sport, offering high quality and modern styles that are adaptable for every occasion. The brand strives to deliver every athlete, from professionals to enthusiasts, with the opportunity, products and inspiration to reach their full potential. Reebok currently operates in 80 countries with approximately 400 freestanding stores around the world.