Belchertown’s fledgling nano brewery, Arcpoint Brewing, has started distributing its beer in cans. The veteran-owned startup launched back in February, brewing small batches on a production pilot system, and has previously distributed its beers at select bars and restaurants. Their most recent release, Variance IV, is a 5.5% unfiltered hazy Pale Ale with a rich mouth feel and notes of grapefruit and lime. It’s currently available in 16-ounce 4-pack cans at a handful of liquor stores, including The Beer Shop in East Longmeadow and Cooper’s Corner in Northampton. 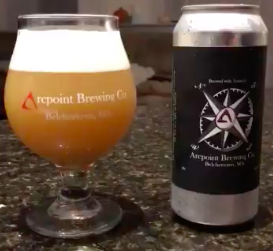 For their first 10-barrel batch, co-founders CJ Eldridge and Chris Peterson turned to Brewmaster’s Brewing Services, an independent production brewery formerly owned by Opa Opa Brewing. Producers of familiar contract brands like 3 Beards and Brewmaster Jack, they invited Eldridge and Peterson to mash in with them on brew day, an important detail for the young brewers. “We want to be there every step of the way when we’re brewing, even if it’s at someone else’s brewery,” Eldridge said.

The 50 or so cases of Variance IV are being self distributed this week, but probably won’t be on shelves for very long. If you don’t get your hands on any, check the brewery’s Facebook page for future releases. Up next is their flagship IPA True North. If you’re feeling charitable, another option is the Big Brothers Big Sisters of Hampden County Holiday Auction and Craft Beer Tasting event on November 9. “We’re not sure what we’re bringing yet,” says Eldridge, “but we’ll be pouring something tasty.”