10 of the Best Fall Beer Festivals in Massachusetts

Glass half empty observation: Labor Day has come and gone, and with it, so has the summer – bummer. Glass half full observation: there’s nothing quite like autumn in New England – spectacular foliage, crisp days and cool nights, and apple picking. For the craft beer drinker there’s also an amazing array of outdoor beer festivals. In our humble opinion, these are ten you should’t miss.

Simply put, this festival is a beer geek’s dream. Hosted by Mikeller, one of the most renowned breweries in the world, the festival will feature unique brews from more than 50 of the best breweries on the planet. Among the U.S. brewers who received the prestigious Invite are Vermont’s Hill Farmstead, Indiana’s 3 Floyds, and Boston’s own Trillium. The festival will be on City Hall Plaza and has two additional sessions on Saturday. Ticket prices start at $50.

One of our favorite events all year, this festival is well worth the trek down Route 2. Your action-packed day of fun begins with an optional 5 or 10K road race, followed by the tapping of the keg, the world’s largest chicken dance (though they’ve yet to set the record), and the crowd-pleasing chair luge races where contestants race makeshift chairs on wheels down Parker Street hill. There’s also also live music, and oh yeah, authentic German food and beer. Free admission, affordable beer and food. 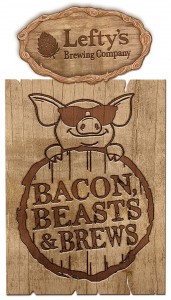 This promises to be an afternoon of great food, great fun, and great beer. Lefty’s Brewing in Greenfield, voted Valley Advocate’s top brewery in 2016, will provide a variety of brews to go along with some of the best barbecue vendors in Western Mass.. In between rounds, test your horseshoe, cornhole or beerpong skills. There’s also a keg toss and a stein hoisting competition. Ticket prices vary from a $6 general admission fee (where you pay as you go) to a $60 VIP package, which includes beer & food.

This one’s a no-brainer for South Shore craft beer drinkers, or anyone who’s thought about a beer trip to the Southeast. Here’s your chance to hit up ten of the region’s breweries in one afternoon. Hosted by Black Hat Brew Works in Bridgewater, the event will feature food trucks, music from CAT Country Radio, and a home-brew competition. Tickets are $35 and include unlimited 2 ounce samples. All proceeds will be donated to local South Shore charities.

The first brewery in the Bay State to throw it’s own Octoberfest party, Harpoon will celebrate its 27th festival this year. This event usually draws a youngish crowd, with patrons getting their fill of bratwurst, chicken dancing, and of course, Harpoon beer. German music played by a traditional oompah band will lend authenticity. This is the kind of shindig where you should definitely bring your lederhosen. Tickets are $25, which includes one drink token. Two more sessions on Saturday.

Every one of of the Cape’s eight breweries (we included Buzzard’s Bay) will be pouring for this event, but some 75 brewers will be on hand for the fifth annual even held at the Cape Cod Fairgrounds in Falmouth. Choose from more than 200 beers to sample while listening to live music and noshing from food trucks for three and a half hours. Food isn’t included in the $50 admission, but you do get a branded commemorative glass that’s pretty sweet.

Hosted by Hophead Events in Plymouth, who’s motto is “events that inflict fun,” this festival is one of the few that conveniently includes beer and food all for one price. More than 60 different fall beers will be paired with a variety of bacon-inspired foods created by some of the region’s top chefs. Enjoy live music from Dalton and the Sherrifs. Tickets are $45.

We mark our calendars every fall for this event (literally, tickets sell out in a matter of days). You should too, especially if you enjoy pumpkin beers. CBC brewmaster Will Meyers procures some of the tastiest and most unusual fall-inspired brews from around the country. Fill your commemorative glass with full pints of a few of your favorites, or opt for for partial pours and sample a dozen or more. Tickets (last year they were $25) go on sale September 13, don’t hesitate. Costumes are highly recommended.

What could possibly be better than a beer festival? A beer festival that pairs its beers with some of the best local desserts in Massachusetts! Drink Craft Beer has done just that, inviting 20 local breweries and cideries to join with some of the area’s best donut, cookie, candy, chocolate and ice cream makers for an experience your taste buds won’t soon forget. Each of the three sessions, there’s also one Friday, include unlimited sampling of beer and sweets. Tickets are $55.

Every week feels like Mass. Beer Week for us, but now it’s official. Beer Advocate will launch the inaugural event to celebrate the Bay State’s growing family of brewers, their amazing beers, and the awesome craft beer community here in the Commonwealth. The 10-day event will include education, tours, tastings, dinners, and other social gatherings celebrating local beer.

Did we leave your favorite fall beer event off our list?
Just let us know with the “submit a comment” button below.
No one’s perfect, especially us. Cheers.