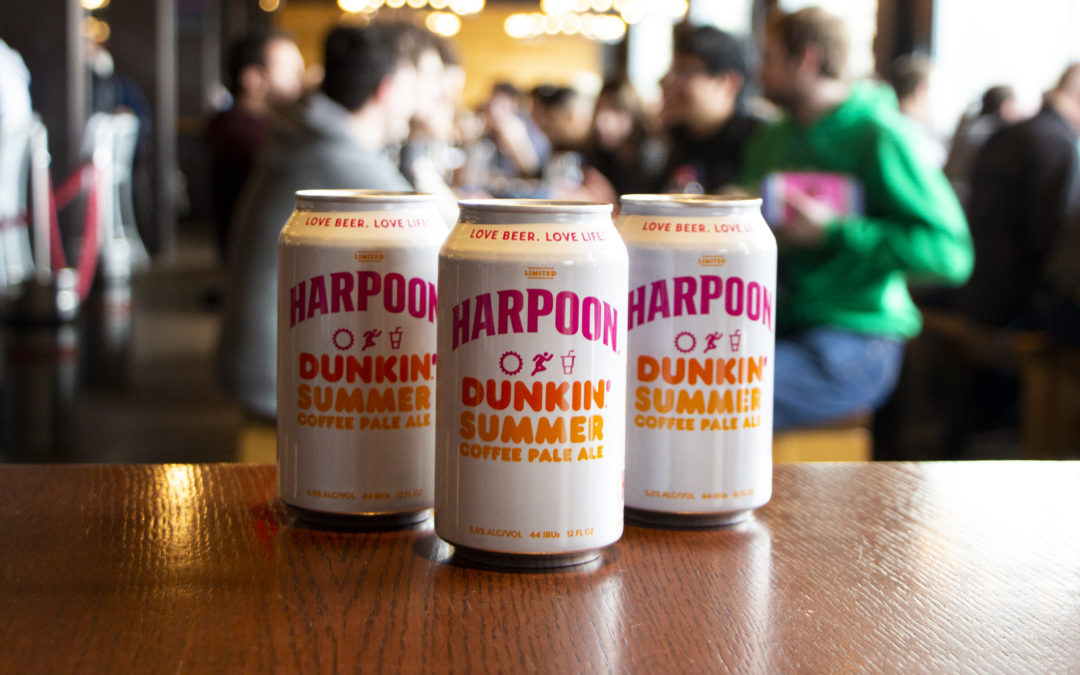 Two iconic beverage brands are back together for another cool combination of beer and coffee: Harpoon Dunkin’ Summer Coffee Pale Ale available now on tap and in cans

A cool new way to kick back at the end of any sunny day or seasonal celebration, Harpoon Dunkin’ Summer Coffee Pale Ale will be available beginning today through summer in both 12 oz. cans and draft at select retail locations across the Eastern U.S. At 5.0 percent ABV, this hoppy tribute to Dunkin’s signature Iced Coffee combines the flavors of Dunkin’s Original Blend with a bright, summery pale ale. The new brew pairs perfectly with delicious summer favorites like coffee rubbed brisket, chipotle chicken tacos, Dunkin’ coffee rolls, and outdoor brunch.

Harpoon Dunkin’ Summer Coffee Pale Ale marks the second craft beer created in partnership between these two iconic American beverage brands. Last October, Dunkin’ and Harpoon Brewery came together to toast the start of fall by introducing Harpoon Dunkin’ Coffee Porter. It proved to be extremely popular among both beer enthusiasts and the brands’ fans alike, with millions of pints served within the regional brewery’s distribution footprint.

According to Tony Weisman, Dunkin’ U.S. Chief Marketing Officer, “The classic tastes of Dunkin’ coffee and Harpoon craft beer make for such an irresistible combination, it was inevitable we’d collaborate again. We saw so much excitement and passion for our partnership last fall, and we’re thrilled to delight our fans who start their day with Dunkin’ coffee and end it by enjoying one of Harpoon’s famous craft beers once more with the introduction of new Summer Coffee Pale Ale.”

“I just depleted the last of my private stash of Harpoon Dunkin’ Coffee Porter the other day, so, selfishly, the timing on this launch couldn’t be better,” said Dan Kenary, Harpoon’s Co-Founder and CEO. “We ended last year’s baseball season with the intro of Harpoon Dunkin’ Coffee Porter, and we’re excited to begin this season with the release of our Summer Coffee Pale Ale. Most importantly, it’s a delicious beer – hoppy and vibrant with a nice coffee character. We’re thrilled to partner with an icon like Dunkin’ again.”

Click above to get more details or to RSVP.

To learn more about Dunkin’, visit www.DunkinDonuts.com, or subscribe to the Dunkin’ blog to receive notifications at https://news.dunkindonuts.com/blog.

Founded in 1950, Dunkin’ is America’s favorite all-day, everyday stop for coffee and baked goods. Dunkin’ is a market leader in the hot regular/decaf/flavored coffee, iced regular/decaf/flavored coffee, donut, bagel and muffin categories. Dunkin’ has earned a No. 1 ranking for customer loyalty in the coffee category by Brand Keys for 13 years running. The company has more than 12,800 restaurants in 44 countries worldwide. Based in Canton, Mass., Dunkin’ is part of the Dunkin’ Brands Group, Inc. (Nasdaq: DNKN) family of companies. For more information, visit www.DunkinDonuts.com.