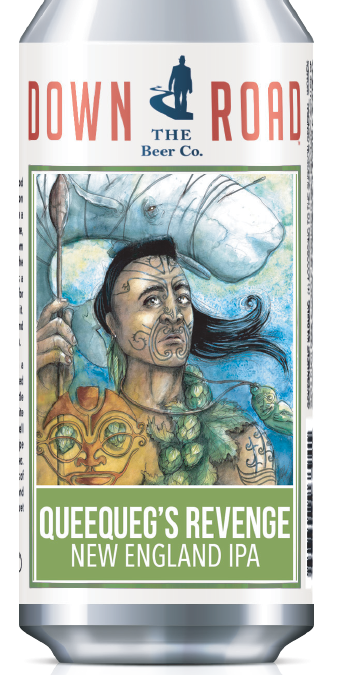 EVERETT, MA – With the upcoming opening of its Everett-based Taproom, Down The Road Brewery is excited to announce the release of Queequeg’s Revenge – a citrusy New England IPA. The 7% turbid ale makes liberal use of Pacifica, Green Bullet and Motueka, three fresh strains of juicy hops from New Zealand.

Over the past 10 years, New England IPAs have exploded in popularity. Queequeg’s Revenge is true to style with hazy turbidity, low bitterness and smooth mouthfeel. The bright hop profile features a blast of citrus, tropical fruit and floral spiciness. Fresh, smooth and aromatic, this is a NEIPA for hop lovers who are looking for something new.

Queequeg, the tattooed harpooner from Melville’s Moby Dick, was a natural muse for this epic beer. Ishmael’s friend and shipmate was the king of his home island off the coast of modern day New Zealand. Queequeg’s Revenge is our opportunity to make a hero of this amazing literary character who is too often resigned to a supporting role.

Queequeg’s Revenge is a limited release available in 16oz cans and on draft. The New England India Pale Ale will be available throughout Eastern Massachusetts beginning next week. Down The Road will also be pouring its newest beer at its Everett Tap Room upon opening to the public later this spring.

About Down The Road Beer Company:

Down The Road Beer made its first official mark on the Metro Boston Craft Beer market with the launch of its signature Pukwudgie Pale Ale in April 2015. However, the company’s Founder and Head Brewer, Donovan Bailey, began brewing beer over 20 years ago with his father. Down The Road brings a uniqueness to the Craft Beer market by bucking the trend to create the next craziest innovation. Instead, the company focuses on creating fresh, high quality beer, brewed locally in Massachusetts and inspired by traditional brewing techniques. Down The Road is based in Everett, MA and has already sold its beers in over 700 retail outlets, bars and restaurants. The company plans to open a Taproom at 151 Bow Street in Everett this spring to further deliver upon its mission to bring its Fresh, Local and Inspired beer ‘Down The Road’. Visit www.downtheroadbrewery.com or follow the company on Facebook, Twitter or Instagram at @DTRBrewery to find out more.