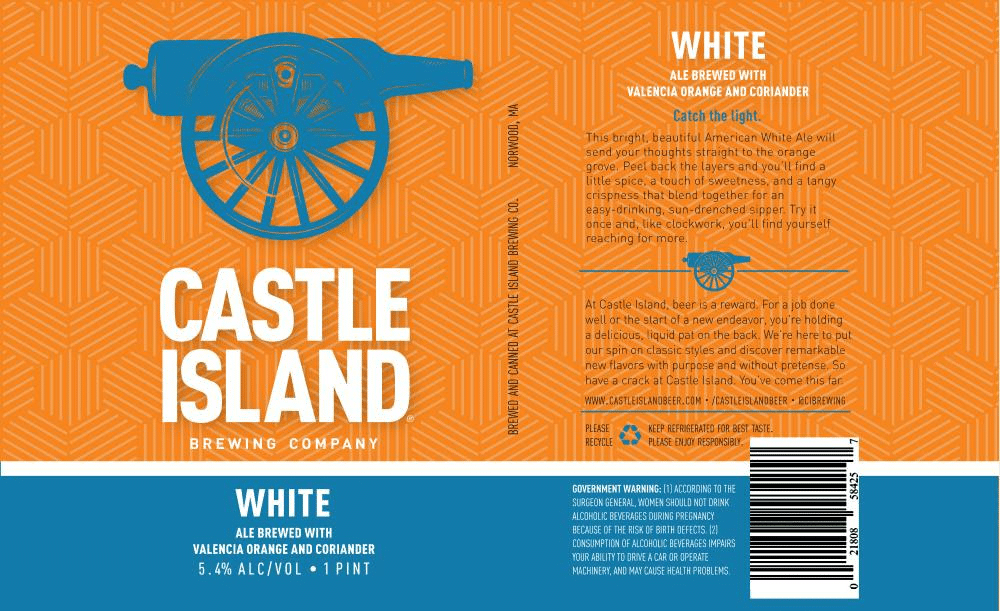 PRESS RELEASE / March 19, 2019 (NORWOOD, MASS) – Castle Island Brewing Co. is adding a new release to their lineup of core beers. This latest addition plays with a style that has experienced continued popularity over the last few decades, the light, soft, and fluffy White Ale. Castle Island White, notably, is not an IPA, and joins the company’s award-winning lager to round out the company’s otherwise hop-forward core portfolio. In an industry that is saturated with hazy, juicy IPAs, there’s a hole in the market for a style that has huge mass appeal and White aims fill it. This is Castle Island’s response to a market that is in need of change and gives the company the ability to reach a consumer base that doesn’t want to drink another hop-heavy beer.

Castle Island White is a Belgian-inspired ale brewed with Valencia oranges and coriander, creating a balanced profile of both tangy, sweet citrus followed by clove and spice. With a mouthfeel that is light and pillowy, this White ale delivers a brightness that lingers on the palate.

“The addition of White to our core lineup of beers gives us the opportunity as a brewing staff to incorporate a traditional Belgian yeast strain into our weekly processes,” comments Head Brewer Matt DeLuca. “Engineering new styles that are destined for year-round wholesale presents a lot of fun challenges but allows us to diversify our portfolio and explore new techniques on the production floor.”

Unlike the dank, heavy hop-laden flavors of popular hazy IPAs, this American White Ale is meant for those looking for something with more nuanced characteristics and that relies on the ease and simplicity of the style at its foundation. It’s a throwback to something that feels more classic and timeless, and the relatively low ABV of 5.4% makes White a sessionable beer that can be enjoyed more than once in a sitting.

White will be launching on draft and in 4-packs of 16-ounce cans the week of March 18th and will officially get tapped at Castle Island’s Norwood brewery and taproom on Saturday, 3/23 at 11am.

Castle Island is also partnering with restaurant industry veteran and World Champion Pitmaster Andy Husband’s Smoke Shop to celebrate White’s debut into the market. The brewery and the restaurant are teaming up to throw an event on Wednesday, 4/10 from 5-8pm in the style of a backyard BBQ at the restaurant’s Kendall Square location where one lucky raffle winner will walk away with a Castle Island branded grill. More details on the Castle Island and Smoke Shop BBQ event will be announced in the coming weeks via the brewery’s social media channels.

The Norwood taproom is open daily from 4-8pm on Mondays and Tuesdays, 11am-10pm Thursdays through Saturdays, and 11am-6pm on Sundays.

Castle Island is an award-winning Massachusetts brewery dedicated to crafting a party with a purpose. With a focus on American-style ales and lagers, we make offerings that are both unique and approachable. Whether you find yourself discovering Castle Island for the first time or have returned for another round, you can expect a stellar experience from the very first to the very last sip. You can find our beer throughout Massachusetts and Rhode Island in cans and on draft, as well as at our Norwood brewery and taproom.