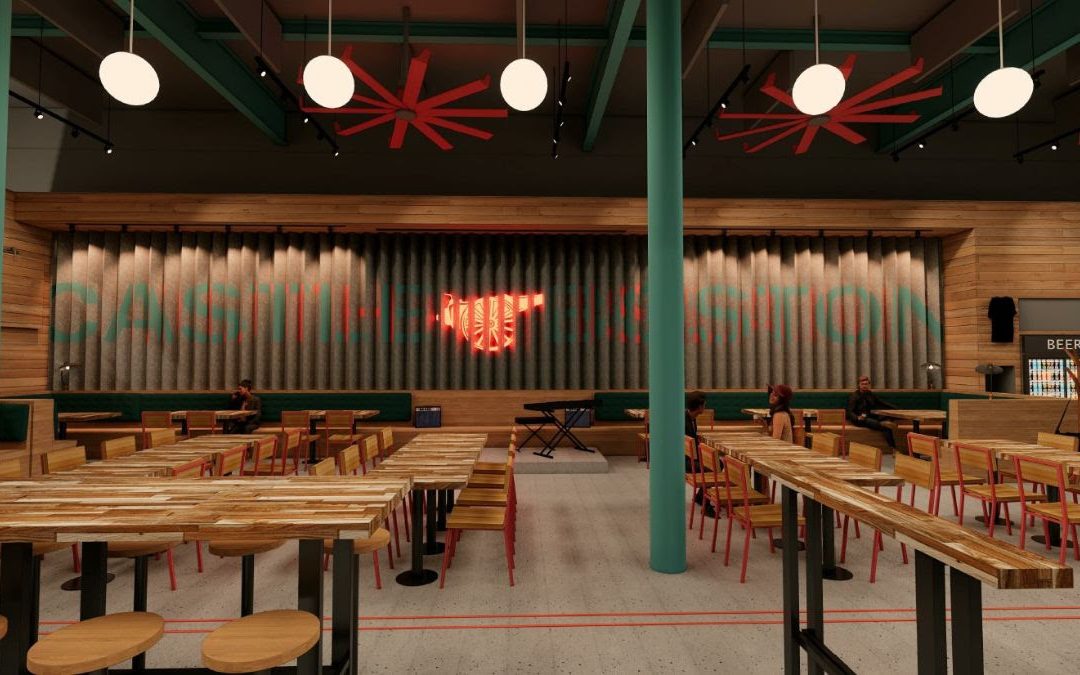 PRESS RELEASE / April 6, 2021 (SOUTH BOSTON, MA) – Castle Island Brewing Company announced this week that construction is underway on a new taproom at 10 Old Colony Ave. in South Boston, the site of the former Cole Hersee company. Slated to open this summer, the taproom will be home to a 10-barrel innovation brewery, a tasting room and event space, a full kitchen, and an outdoor patio.

“It’s no secret that we have always wanted to open a location in South Boston,” said Adam Romanow, Castle Island Founder & President. “In many ways this feels like a homecoming, both personally and for the brand.”

Romanow, a South Boston resident, named the brewery after the famous Southie landmark and looked to originally open in the neighborhood. But after a difficult time finding a suitable location, the company ended up opening shop in Norwood in 2015.

The building Castle Island is now going into is one Romanow is already familiar with. Up until recently, it was owned by his extended family, third-generation owners of the Cole Hersee company.

The property changed hands in 2019 when the building was sold to Newton-based National Development, the real estate developer behind the Ink Block in Boston’s South End. National Development, with whom Castle Island had partnered on a seasonal pop-up beer garden in Charlestown, reached out to Romanow about bringing a taproom to their new development at the site.

“It was probably the easiest ‘yes’ we’ve ever had,” according to Romanow. “National Development has been a great partner for us in the past, and their vision for the Cole Hersee building is very compelling.”

Castle Island originally had sights on opening the taproom in 2020, but when the pandemic hit in the spring, those plans were put on hold. The brewery, like many others in the Commonwealth, saw sales drop overnight as bars and restaurants shut down and their own taproom was forced to close. Castle Island furloughed eighty-five percent of their workforce in March, pivoted the taproom to a takeout-only model, and temporarily halted all spending on the South Boston expansion.

“It was brutal. We were so committed to the project and we had all the capital in place, but the pandemic created so much uncertainty that we just had to hit pause,” Romanow said.

As 2020 rolled along, Castle Island’s sales slowly rebounded, and the company resumed progress on the new taproom. The brewery teamed up with Lombardo’s, a Randolph-based event venue and catering company, to provide on-site food service in Norwood that would allow Castle Island to reopen their taproom. Lombardo’s General Manager, David Lombardo, and Romanow grew up together and used this opportunity to support each other during the pandemic, with Lombardo’s being the exclusive food partner for Castle Island’s Norwood location. 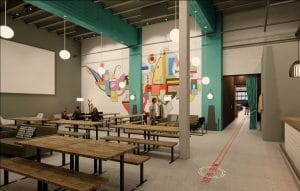 The two companies are doubling down on that partnership at the South Boston taproom, where they plan to launch Bardo’s, a new food concept run by the Lombardo’s team. Bardo’s menu will focus on South Shore-style bar pizza, Lombardo’s famous chicken cutlets and house-made sausages, and rotating small plates. The Bardo’s team has even worked Castle Island beer into nearly every menu item.

“David and I used to daydream about doing something like this,” said Romanow. “The fact that it’s actually happening is one of the silver linings to come out of the pandemic.”

With the announcement of the new location, Castle Island made it clear they have no plans to leave Norwood. They will continue to brew and package beers like their Keeper IPA out of that location, and their Norwood taproom remains open to the public, with plans to relaunch outdoor dining this week. The company expects the new location will create more than thirty-five new jobs in South Boston, with up to ten additional jobs in Norwood to provide operational and manufacturing support.

To learn more about Castle Island Brewing and their mission, visit their website at castleislandbeer.com or follow their social media channels at @cibrewing.

Castle Island is an award-winning brewery dedicated to the idea that beer should be inclusive, approachable, and excellent. Established in 2015, Castle Island has built a reputation for quality and consistency with beers like Keeper, the company’s flagship IPA, and a variety of year-round and limited release offerings. In 2020 Castle Island launched the Fiver Initiative, a targeted philanthropic program funded by sales of the brewery’s Fiver IPA. The Fiver Initiative aims to support local non-profits in the areas of environmental sustainability, social justice & equality, arts & education, animal welfare, and public health. Castle Island’s beer can be found in bars, restaurants, and liquor stores throughout Massachusetts, Rhode Island, and Connecticut. For more information about Castle Island, visit www.castleislandbeer.com.