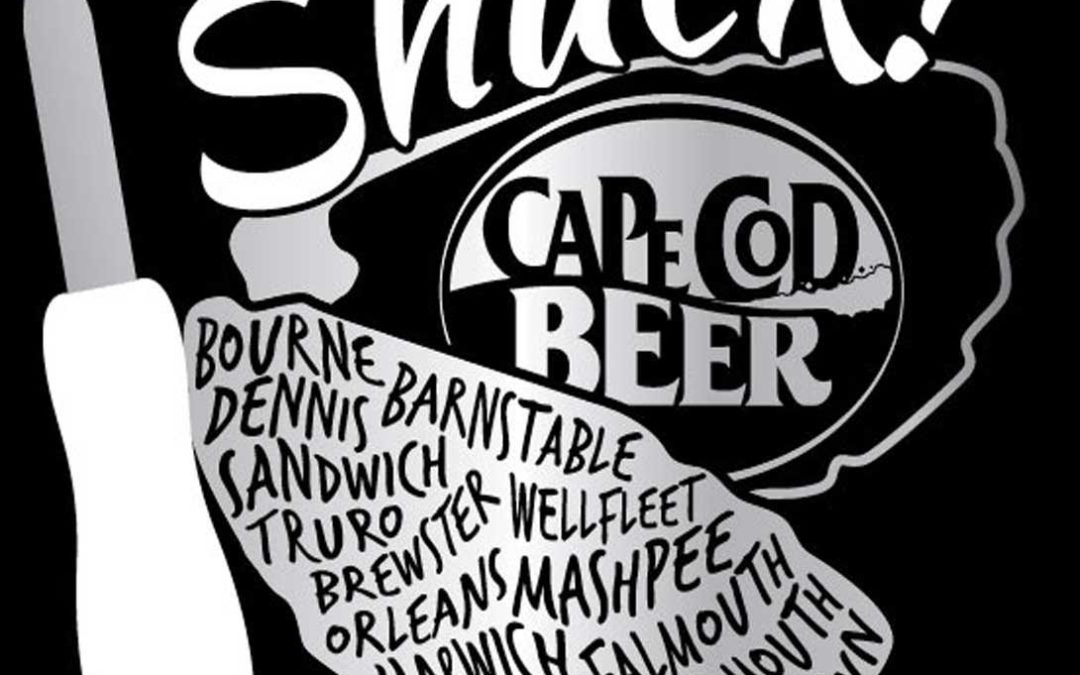 PRESS RELEASE / September 9, 2019 (Hyannis, MA) –  Shuck! A Day of Oysters & Beer returns for it’s second year at Cape Cod Beer in Hyannis. The autumn event is meant to highlight the wide variety of oysters that Cape Cod offers as well as their economic and ecological impact on the region.  Cape Cod Beer is once again partnering with Big Rock Oyster and Cape Cod Oyster for a day-long event celebrating all things oysters, to be held at Cape Cod Beer’s brewery on Saturday October 5thfrom 1-5pm.  A huge success last year, the event will be setup similarly but organizers plan to expand the shellfish options to include littlenecks and shrimp this year, as well as 8 different varieties of oysters available to try – each from a different location on Cape Cod. Along with raw bars and locally brewed beer, wine and cider, The Barnstable Association for Recreational Shellfishing ( BARS) will be there selling clam chowder and The Pineapple Caper food truck will be selling non-seafood offerings. 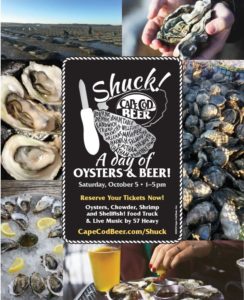 Educational partners include: Barnstable Clean Water Coalition (BCWC), Slow Food Cape Cod, the Massachusetts Shellfish Officers Association, and the Town of Barnstable Natural Resources Department, all of whom will have displays and personnel onsite to talk about shellfishing’s positive impact on the Cape’s blue economy and water quality. Slow Food Cape Cod will be on hand to teach people how to shuck oysters.   The popular local band 57 Heavy headlines the music for the day, with local singer/songwriter Chris Parkin opening for them. Cape Cod Beer’s Shucker’s Reward Oyster Stout, an Irish extra stout made with oysters from across Cape Cod will also be available at the event.

When asked about the return of this event, co-founder Beth Marcus said “We had such a great time last year hosting this educational fundraiser to benefit Barnstable Clean Water Coalition, and working with the oyster farmers, that we are bringing it back for a second year! Water quality is on the top of everyone’s minds these days – which is great – and oysters do a lot to help us manage some of our water quality issues – so why not give them their own day to celebrate!  Besides – Oysters & Beer are perfect together!”

As part of last year’s event, media sponsor Cape Cod Community Media Center in conjunction with Barnstable Channel 18, released an award winning series of documentary shorts, called “Movers & Shuckers”, which won the second annual Mass Access Creator Award in the Documentary category! They are back at it again this year, releasing “Movers & Shuckers Season 2”, which is focusing on the business of oysters including job creation, oysters as a food product, and BCWC’s Hyannis Upweller project.  The original award-winning videos and the new episodes (upon release) can be found on the Cape Cod Beer website at http://www.capecodbeer.com/shuck.

There are only 800 tickets available for this event – and it did sellout last year – so if you plan to attend it is encouraged to purchase your tickets in advance.  Tickets for the event can be purchased at http://www.capecodbeer.com/shuck While Cape Cod Beer has on-site parking; carpooling is encouraged to help reduce congestion.

We have a maximum annual capacity of approximately 12,000 barrels.  We brew on average 8-10 times a week during the high season, and about half that during the off season.

We self distribute our products within approximately 50 miles of the brewery – from Plymouth to Provincetown. In total we have about 500 accounts that carry our beer, roughly 350 bars or restaurants and another 150 or so package store/liquor stores that carry our beer. You can find Cape Cod Beer near you by checking out our beer finder!