Brew Dog of the Month: Vic of Skyline Beer Company 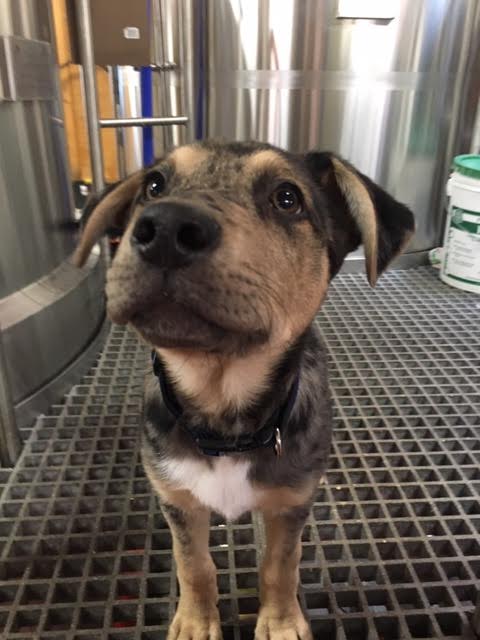 What is the Skyline Beer Company secret that has this new Massachusetts brewery packed with thirsty, hungry patrons? Is it their extensive food menu? Is it their revolving tap list? Is is their family-friendly environment? Or maybe it’s Vic, their brew dog, named after the Australian hop Vic Secret. This little pup owned by Lisa Pac, one of the co-owners of Skyline Beer Company, has brought his youthful energy to the staff at Skyline and is a welcome distraction on the long, busy days at the brewery/restaurant.

Vic, not even four months old, was adopted through Pawsafe out of Ellington, CT. He came from down south with his siblings and has found a home at Skyline. His main job is to keep Blu dog, the other brew dog at Skyline, company as well as keep an eye on the grain room. When not at the brewery, Vic loves to play with and chase the two young cats at home and walk through the nearby tobacco fields which helps him burn that puppy energy.

Around the time Vic came into the Skyline family, they were opening at their current location of 98 Southwick Road in Westfield, Mass. After several years of being a craft beer and wine bar, bakery, and home-brew supply store in multiple locations, including inside Westfield River Brewing in Southwick, they realized that they had outgrown these type of spaces and looked for the next iteration of their business. Eventually they decided to open a 10-barrel brewery with an accompanying kitchen to create cuisine to pair with their beer. 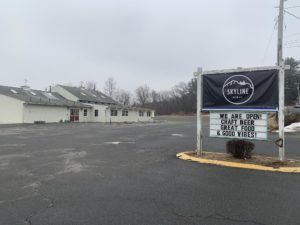 Their fare includes everything from starters like beer cheese dip, pretzels, roasted cauliflower, wings and chili, to salads, pizza and wraps, to comfort offerings like burgers and pulled pork sandwiches. Open Tuesday through Sunday, people fill up the sizable dining room to grab a bite and brew. Skyline offers 6-8 of their own brews ranging in styles from NEIPAs and a Blond Ale to a Coffee Porter and an Irish Red. They also have beers from other breweries and spirits to whet your whistle.

Now some stats on “Vic” in our: “Tail” of the Tape

Favorite Toy: Lately it is his big green neon stuffy

Favorite Thing To Do: Play with the other Skyline fur friend – Blu dog

Quote: “Mama, where’s Mama?” (Vic is always looking for Lisa and concerned when she’s not there) 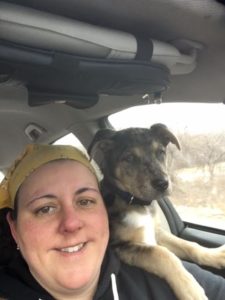 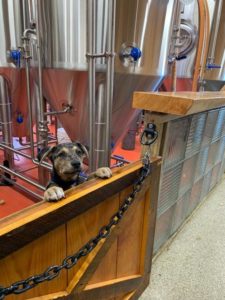 Vic would like you to know that Skyline Beer Company is hosting a beer dinner this Sunday March 9 for Mass Beer Week. Each dish in this four-course dinner will be paired with a different Skyline beer. Tickets are $60 and you can purchase them as well as get more information on the dinner here. Skyline’s motto is Food. Beer. Family. Vic is very happy to have found his family and wants to invite you to become a part of it too!

If you have a brew dog that you would like to see featured in our Brew Dog of the Month blog, please email us at massbrewbros@gmail.com