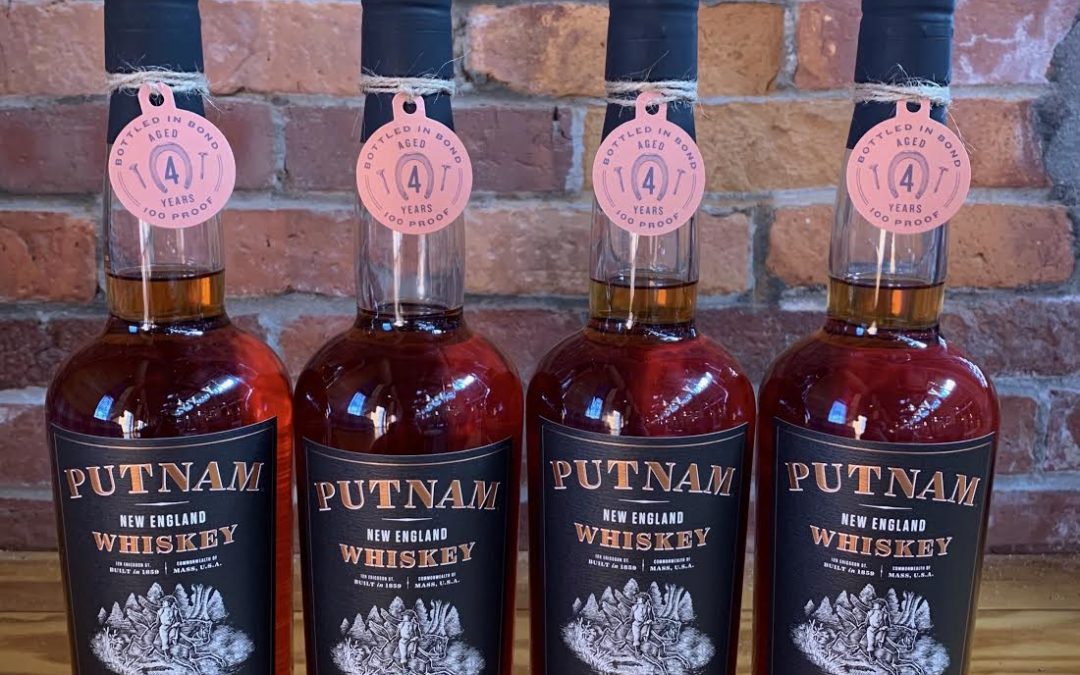 PRESS RELEASE / October 28, 2019 (Boston, MA) – Boston Harbor Distillery, Boston’s premier whiskey distillery, located at the Port on Boston Harbor in the Neponset/Dorchester section of Boston, proudly announced today that it has released their ‘bottled-in-bond’ Putnam New England Single Malt Whiskey. This accreditation is recognized by the federal government stemming from the Bottled-In-Bond act of 1897, pertaining to spirits that adhere to exacting standards of craft and quality by distilling in one distillation season, by one distiller, in one distillery, bottled at no less than 100 proof and aged on site for a minimum of four years.

Putnam New England Whiskey, Boston Harbor Distillery’s flagship brand, is a single malt whiskey that boasts a grain bill of 100% malted barley and the distiller’s skill of capturing only the flavorful heart of the spirit. Aged in 53-gallon new American oak barrels that were seasoned and heavily charred, Distiller Marco Forziati describes the flavor profile as “rich and flavorful with a bold chocolate finish.” Other Putnam Whiskey varieties include Rye, Red Wine Finish, and Single Barrel Cask Strength, and prices range from $40 – $80 per 750 ml bottle. The coveted and exclusive Putnam New England Single Malt will only be available for purchase at Boston Harbor Distillery.

Putnam New England Single Malt Whiskey is the first whiskey that Boston Harbor Distillery distilled since opening in 2015 and is named to celebrate the inventive spirit, craftsmanship and entrepreneurial proclivity of Silas Putnam, the builder of Putnam Nail Factory in 1850s, where the distillery is housed. Putnam is bottled at 100 proof and has a complex character that is noted with flavors of coffee, toffee and chocolate finish. It’s made grain-to-glass on location mashing in 100% two-row malted barley and pure water from the Quabbin Reservoir, distilled in a Vendome copper pot still with a registered serial number 1776. This smooth whiskey is perfect neat, with an ice cube or in a cocktail, complementing full-flavored ingredients in a way that 80-proof whiskeys simply do not.

“Putnam New England Single Malt Whiskey’s Bottled-in-Bond accreditation celebrates Boston Harbor Distillery’s fourth anniversary and is proof that quality whiskey crafted with the finest skill and ingredients can be found not just in Scotland and Kentucky, but right here in New England, too,” said Boston Harbor Distillery Founder Rhonda Kallman. “Putnam Single Malt is intended to showcase American whiskey in a whole new way, with a mash bill that is inspired by the region’s history and terroir resulting in a one-of-a-kind rich, smooth and flavorful whiskey meant to be savored.”

Boston Harbor Distillery creates proprietary craft spirits that integrate rich history, distinctive experiences and beverage culture into each bottle it produces. Housed in a pre-Civil War era building overlooking Boston Harbor, the Distillery serves as both a distilling facility and an event space, tour and tasting room, and mercantile. BHD is located at The Port on Boston Harbor, 12R Ericsson Street in the Dorchester/Neponset section of Boston. For additional information about tours, tastings and hours, call BHD at 617-533-7001 or visit Boston Harbor Distillery online on their website, ‘like’ them on Facebook or follow them on Twitter and Instagram.