Another Boston locale got its own neighborhood brewery this weekend when Distraction Brewing quietly opened in Roslindale Village. Co-founders Mike Estey, Justin Garnache, and Patrick French initially planned to open a nano brewery on Belgrade Ave in 2018, but altered their plans mid stream due to the overwhelming response from thirsty and supportive neighbors. “We wanted to be ready to meet demand,” said French, “so we decided to upgrade to a 10-barrel system that would allow us to churn out plenty of beer.” The decision, which included a successful kickstarter campaign to help fund the expansion, postponed their launch date but was an overwhelming success. Now, just a week or so away from its official opening and regular days and hours, the excitement is palpable.

“We’ve made significant progress in the last few months,” says French. “The brewhouse is installed, the taproom is finished, and it’s finally looking like a real brewery rather than a construction site.” Located in an iconic building, whose image you’ll recognize in their logo, the brewery will undoubtedly be a popular neighborhood hangout. And that’s just what the trio, a longtime home brewer, a rep in the wine and spirits distribution industry, and a former brand ambassador for Brooklyn Brewery, have envisioned since joining forces more than two years ago. Fermentation and brite tanks will reside in the basement, with the glass-encased brewhouse and 80-seat taproom upstairs on street level. There’s also a cozy space for multipurpose performance programming. 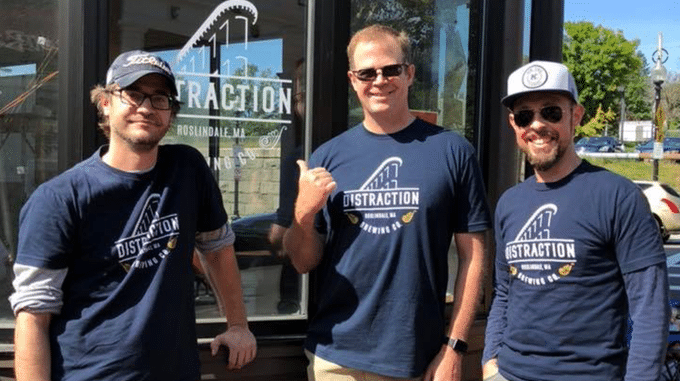 If you’re wondering about outdoor drinking, they’ve got a plan for that too. Though it won’t be ready until 2020, the cofounders envision a German themed beer garden on the north end of Birch Street bordering the brewery. According to French, Roslindale Village Main Street (RVMS), a non-profit organization whose mission is to promote the village as an appealing destination and community center, has plans to turn the area into a permanent pedestrian walkway. Distraction plans to offer a preview of things to come this summer when RVMS closes the street to traffic on select Saturdays for restaurants and shops to offer popups in conjunction with the weekly farmers market.

The taproom opened in impromptu fashion this weekend as part of the Roslindale Open Studios celebration supporting local artists, which the founders had committed to several months earlier when they imagined a mid summer opening. They’re open again today from 11:00 to 5:00, and French said they hope to be fully open for business, with regular days and hours. by the end of the month. When they do open, six core beers will be available for full and half pours: a Pale Ale, a Brown Ale, a New England style IPA and a Double IPA, a Porter, and a Belgian Ale that Estey, the brewer, describes as a Tripel-Wit hybrid. There may initially be growler fills and a limited number of kegs for select local accounts, with cans for take-out likely coming later. “It all depends on how well we’re able to keep up with the taproom demand,” said French, who shared that on-premises service is their first priority.

With the opening of Distraction Brewing, the brewery count in Boston proper rises to 14, with the another, Brato Brewhouse and Kitchen in Brighton, very close to opening as well. Additionally, Turtle Swamp Brewing, which received permission to make its seasonal Winter Bierhalle at Roslindale Substation a permanent entity, is also open. For now, Distraction plans to be open on weekends, but keep an eye out on their Facebook page for announcements on regular hours.