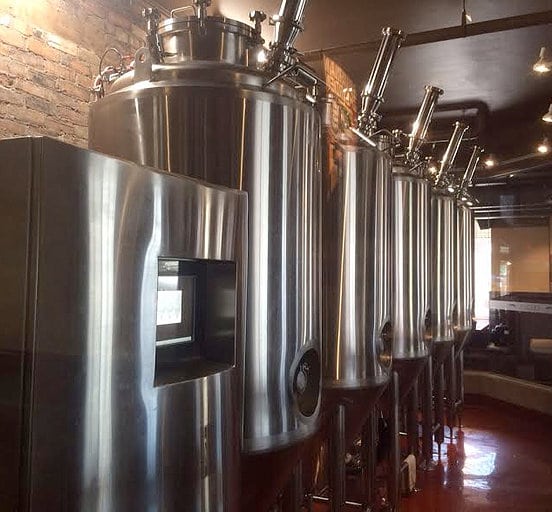 The speed at which Boston’s newest brewpub, Cheeky Monkey Brewing, was able to get up and running is nothing short of amazing. While dozens of breweries around the state have struggled to open for more than a year, Kevin Troy, who owns the property that was formerly Tequila Rain, converted his nightclub into a brewery in half that time. Equally astounding is how little attention it’s gotten. Most would-be breweries these days have interesting back stories about their founder’s vision, or how they earned earned their chops washing kegs or lugging sacks of grain at a previous brewery job. Not this time. A recent visit to the just-opened brewpub and event space, located at the end of Landsdowne Street, revealed why. It turns out, they’re using a SmartBrew system.

A relatively new development in the brewing world, the novel technology is now used in some 30 or so U.S. locations. The big draw is its significantly lower cost and the limited amount of space required to install it – as little as 150 square feet. None of the expensive equipment or time consuming installation is necessary because SmartBrew completes the first half of the brewing process at its headquarters in New Zealand and then ships the wort (the liquid extracted from the mashing process which is then fermented into beer) out to each of its brewery clients. Once it arrives, the automated system monitors fermentation, carbonation, and maturation, and guides the system’s operator through a pre-designed process that determines the type of yeast and kinds of hops called for in the set recipe. A statement on the company’s website even boasts that, “No BrewMaster is required. The system even cleans itself.”

The automated brewery concept has its critics, especially on beer forums. It has been popular within the hospitality industry, with restauranteurs all over the world installing them. As for its popularity in Boston, the SmartBrew system may be a tough sell for the area’s craft beer aficionados, especially when the original Beer Works is less than half a mile down the road. We’ll leave the prognosticating up to the Zoltar fortune teller machine at the back of the brewpub’s spacious game room, which is likely to be filled with Red Sox fans and nightlife seekers regardless of what beer geeks think. 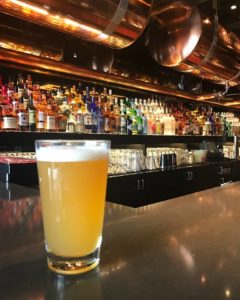 “Craft Beer. It’s What We Do,” says Cheeky Monkey’s website. The first of their house brews was released Friday.

As for the beer, brewery manager Jason McCloud (the system’s operator) debuted his first offering, a pale ale with Galaxy and Cascade, Friday afternoon. Ratings so far are pretty good. A former liquor store beer manager, the 21-year old plans to have three more house brews available by the end of the weekend, and says there is some wiggle room for tweaking recipes depending on consumer preferences. The system has just four fermentation vessels, so it may be a struggle to offer more than a half dozen or so styles at any one time, but with a dozen guest brews and full bar it might not matter.

Owners of the only other SmartBrew system in Massachusetts, the Greasy Luck Brewpub in New Bedford, have been open since November of last year but only seven house beers are listed on Untappd. Deadwood Cafe & Brewery at Boston Bowl in Dorchester also has a condensed brewing method, but it’s not a SmartBrew system.

In other Boston area brewery news, Hopster’s, the brewpub and DIY on-premises brewery, has begun demolition on its new Fort Point location and plans to be open by Thanksgiving. Two others, Backlash Beer in Roxbury and Democracy Brewing in downtown crossing, appear to be on track for late fall or early winter openings as well. That would run the total number of breweries within the city limits to eleven. Trillium’s new brewery and restaurant aren’t likely to be open until later in 2018.