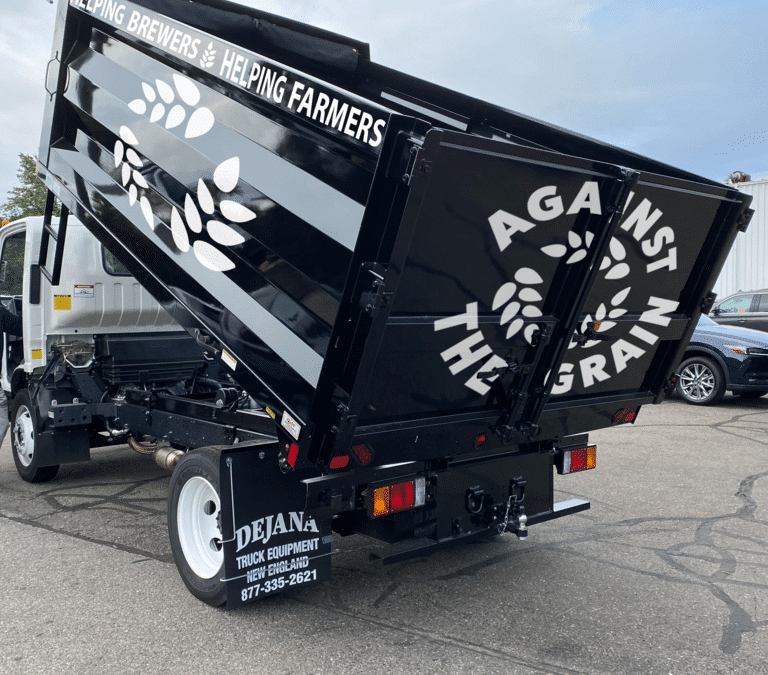 PR / Boston, MA (May 24, 2021) — Boston-based startup company Against The Grain will officially launch its circular economy-inspired business model for upcycling spent grains (the by product of the brewing process) this week. Designed to decrease disposal costs for breweries while eliminating the hassle of picking up and transporting the valuable material for farmers, the company’s innovative scheduling and services protocols allow brewers and farmers to have more time for brewing and farming.

A veteran of the commercial composting and anaerobic digestion industries for the better part of a decade, founder Holden Cookson has helped a countless number of breweries manage their spent grains, but always thought there had to be a better way. “Both the breweries and the farms have logistical challenges in the process,” says Cookson. “Our company’s secret sauce is managing those issues by ensuring that spent grains are regularly and reliably picked up and delivered to farmers on their schedule and in precisely the quantity they need.”

Among the unique business investments Cookson believes will help Against The Grain excel are his relationships with an existing network of local farmers and a custom, enclosed and leak-proof collection truck designed to provide seamless pickups and deliveries that are quick, clean, and quiet. The initial route, set to start this month in Metro Boston, includes breweries such as Brighton’s Brato Brewhouse & Kitchen, Malden’s Idle Hands Craft Ales, and Lamplighter Brewingin Cambridge. Other breweries have also expressed interest and Cookson says he may even consider working out a collection option for home brewers in the future.

Finding an affordable and eco-conscious solution for spent grains is more neccessity than choice. The Massachusetts Department of Environmental Protection (MassDEP) has banned the disposal of commercial organic waste such as spent grains from landfill or incineration since 2014. Restrictions tightened further in 2020 as part of the agency’s statewide initiative to divert food waste from disposal. Additionally, there’s been a growing trend of consumer preference for businesses that invest in sustainable practices.

As illustrated above, diverting food waste to animal food is preferred over composting or sending it to be converted to biofuel through anaerobic digestion, both common alternatives used by breweries for dealing with spent grains. In addition to providing expert animal nutrition advice for farmers in partnership with agricultural consultant Bill Kipp, Against the Grain is in discussions with fellow startup ReGrained, which rescues brewers grains and other food industry byproducts into a line of premium upcycled wholesale ingredients and innovative packaged snacks for human consumption. That’s the highest level attainable on the Food Recovery Hierarchy for breweries. “What’s so rewarding about our idea,” says Cookson “is that not only are we helping breweries do the right thing with their byproduct waste, but it’s saving time and money for them and for farmers.”

Just One Tenth of Plastic Can Carriers Get Re-Used Or Recycled in Massachusetts: Eco-Minded Breweries and Environmental Groups Plan to Change That

For more information or to inquire about becoming a brewery or farm partner contact Holden Cookson via email at holden@againstthegrainne.com or by phone at 207-712-6506.

About Against The Grain

Against The Grain is a Boston-based hauling and logistics company that specifically manages spent grains produced by craft breweries and distributes them to local farm partners. Its founder, Holden Cookson, has worked in the commercial composting and anaerobic digestion industries for the better part of a decade. Co-founder Yigit Demiralp, a data analysis specialist, ensures that all operations run efficiently. Their belief that an easier and more environmentally conscious way of dealing with spent grains is to provide a highly specialized hauling and delivery service, leaving more time for brewers to brew and farmers to farm, inspired them to launch the company in March of 2021.