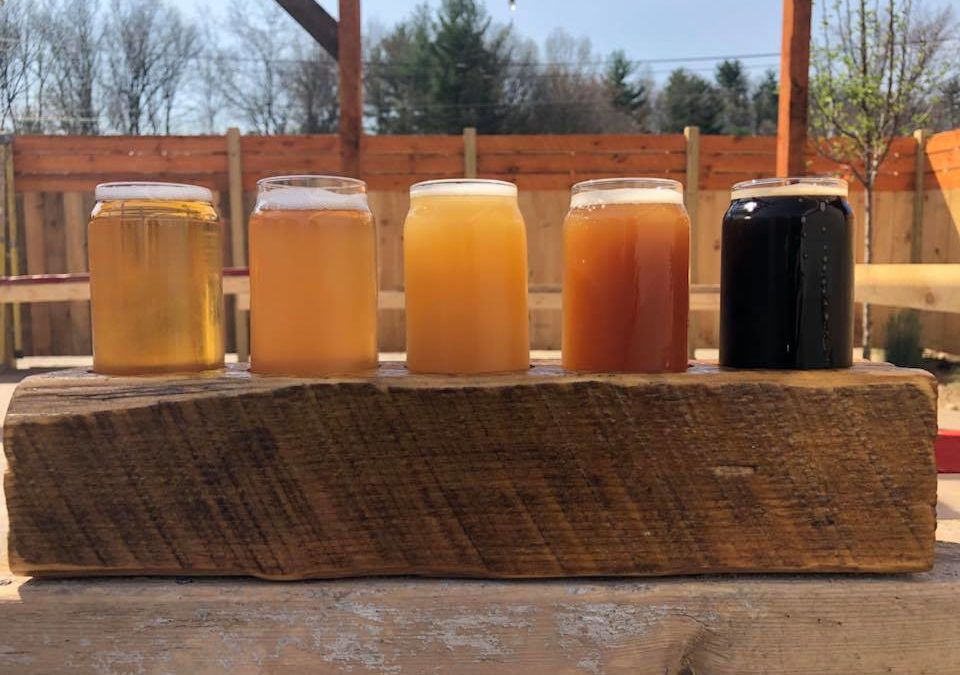 With the summer solstice arriving this week, and patio beer season right behind it, we figured it was a good time to revisit one of our most popular blogs: Massachusetts Breweries With Awesome Outdoor Drinking Spots. With more and more breweries offering beer gardens, patios, and decks, this year’s edition is bigger and better than ever. We’ve identified more than a dozen outdoor drinking spots, and highlighted three of the best, where you can enjoy a refreshing Berliner Weiss or a thirst-quenching Kolsch, right from the source. 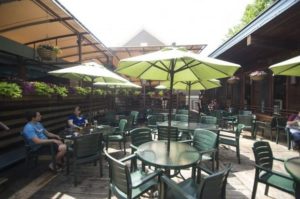 The Northampton Brewery has long been one of the region’s top spots for outdoor beers.

A right of passage for any serious Western Mass. craft beer drinker, the Northampton Brewery has been wowing thirsty visitors with its spacious roof deck longer than most of the state’s breweries have been making beer. Multiple levels and a variety of seating allow you to sit back and enjoy a deckbier, or to sit down and enjoy lunch or dinner from the brewpub’s full menu. A great spot for late night summer beers, they’re open until 1:00 AM seven days a week.

If the region’s most popular outdoor drinking spot gets too crowded then just walk down the street and around the corner to Brew Practitioners, whose comfy patio is open Wednesday through Sunday, and often has live music on weekends. Another way to welcome the weekend is the bi-weekly Food Truck Fridays hosted by Abandoned Building Brewery in nearby Easthampton. The pop-up beer garden is dog friendly, and usually features a special release or two, half a dozen food options, and live music. Check their Facebook page for details. While you’re there check out New City Brewery right next door. Their patio is open everyday serving up a variety of offerings, including the brewery’s unique flagship, an alcoholic Jamaican-style ginger beer, perfect for the warm weather. 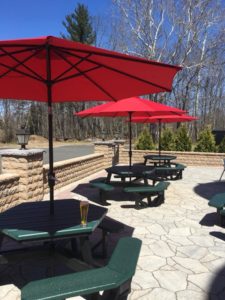 Also in Easthampton is the newly renovated Fort Hill Brewery, a must-visit for fans of classic German style brews, although many swear by their IPAs as well. A recent major renovation includes a second taproom as well as a spacious beer garden out back. The walled in patio features circular tables to sit and eat from the visiting food trucks, umbrellas to keep you and your beer from overheating, and is dog friendly. It’s also right off the Norwottock Rail Trail, which connects six area breweries if you’re on bike.

If you’re heading out to the Berkshires you’ve got plenty of options as well. Start with the solar powered Barrington Brewery, a family-friendly brewpub with a spacious patio which has been offering up tasty barn brewed beer for more than two decades. At nearby Big Elm Brewing in Sheffield  you can enjoy a cold one at their picnic table seating after a hike on one of the local trails.

Another inviting location is Shire Breu-Hous, a brewpub that opened in Dalton last year and has grand pans for an outdoor beer garden. No word on when it will be ready, but with plenty of greenery, bocce courts, outdoor dining service, and a fire pit in the plans, it’s likely to be a regional favorite when it opens. Also a work in progress is the Beer Garden and Bocce Court at Pittsfield’s Wandering Star Craft Brewery, which debuted earlier this month. They plan to debut a new food cart and pour pints from noon to 5:00 on select weekends through the summer and fall, so check their facebook page for announcements. If you head due north you’ll find one of the state’s farthest craft beer outposts, Bright Ideas Brewing in North Adams. Located on the campus of MASS MoCA, they pride themselves on “accessible, affable, quaffable brews” that you can enjoy on their sidewalk patio. 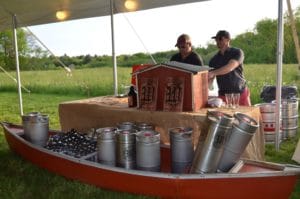 If you’re looking for more of a farm brewery, with gorgeous views and all, try Westfield River Brewing. Located in Southwick, “it’s situated on beautiful farm land, offers great barbecue, and has live music on weekends,” reports Eric Tracy, a regular there throughout the summer. “The beer garden is open for the summer with a wide variety of tasty brews, it’s just a great vibe.”

Not far away, Westfield’s new Tin Bridge Brewing has been creating some good outdoor beer vibes of its own. Their newly fenced in patio sports communal tables under a pergola and plenty more bar seating along a fence that provides a place for your beer while you listen to a live band or nosh on something from a food truck.

A couple of other spots worth checking out this summer include the beer garden at Element Brewing in Millers Falls, which now also has a distillery, and the pending Floodwater Brewing in Shelburne Falls, which is rumored to have a porch out back with views of the Deerfield River.

And finally, Springfield may not have its own brewery quite yet (though we’ve been told to stay tuned for a series of announcements), but the White Lion Wednesdays rotating summer beer garden will be pouring pints in the city’s downtown area all summer long.