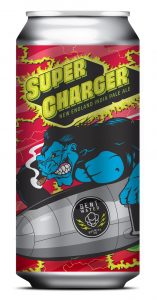 “Lynn is a terrific place, and we wanted to brew a series of beers that helps tell some of the city’s stories,” said Aaron Reames, co-founder and President, Bent Water Brewing. “The Lynn Tribute Series serves as a way to bring attention to some of the unique elements that make the city such a rare gem: it has a history of industry and innovation, multiple beaches, great restaurants celebrating a rich history of cultural backgrounds, and one of the best spots for hiking and exploring in the state: Lynn Woods. That combination of different characteristics make it such an appealing place to be, and when you take into account the terrific water source on top of that, we couldn’t be happier to be a part of Lynn.”

The Lynn Tribute Series will kick off with Supercharger, a nod to the first American jet engine, which was developed in Lynn. Supercharger is a New England IPA brewed with Simcoe, Amarillo, Azacca, and Columbus hops. The aroma is bright citrus and tropical fruits, floral undertones, and a touch of pine. The beer is smooth and filled with tropical fruit flavors, a full mouthfeel and a touch of bitterness to balance the slight malt sweetness.

“We thought IPAs were a no-brainer for the Lynn Tribute Series,” said Adam Denny Golab, head brewer at Bent Water and Lynn resident. “It’s been the most popular style of craft beer for decades, although the most sought-after versions of it have changed over the years. At Bent Water, we think we do a good job of balancing the traditional favorites like the West Coast style IPA against the style that most people can’t get enough of these days, the New England IPA. Like the city of Lynn, we’re adaptable and like to honor history while embracing the future.”

Three of the brewery’s IPAs have received high praise in the last year. Sluice Juice New England IPA and Thunder Funk IPA were recently awarded rankings of 94 and 95 respectively from noted beer & spirits publication, Wine Enthusiast, which categorized both beers as Superb. Equivalent Exchange, the brewery’s hazy New England Double IPA, scored a 91 from Craft Beer & Brewing, which categorizes the beer as Exceptional.

Supercharger will be available in Massachusetts later this week, and in partner states the following week. To locate it at a store near you, check the Bent Water beer finder.