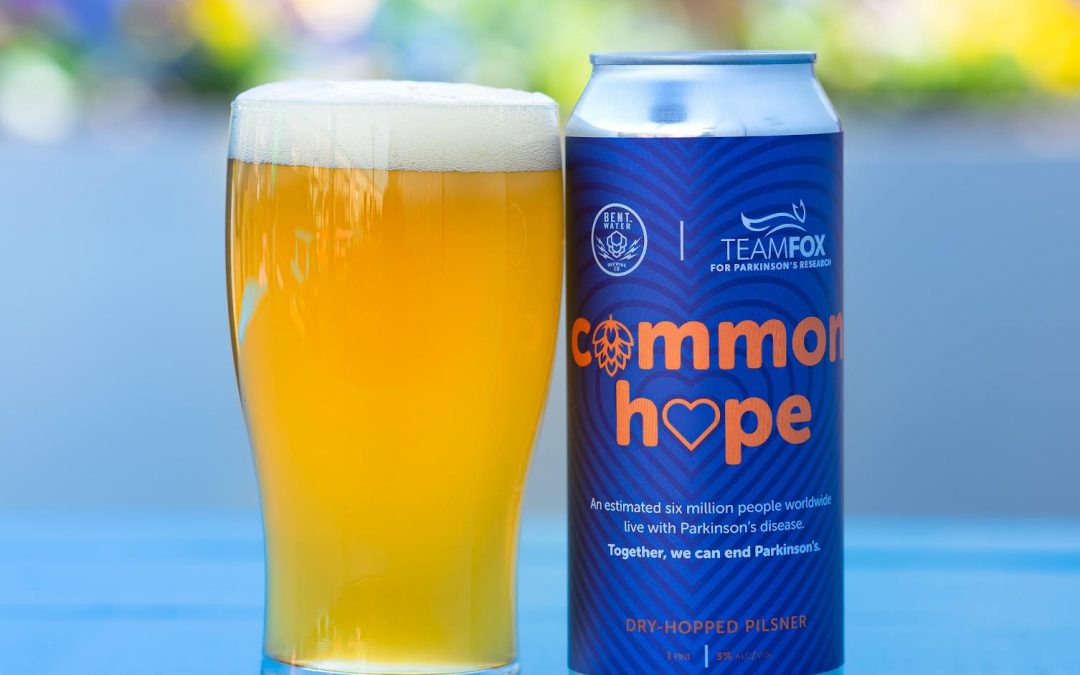 Initiative Will Raise Awareness and Funds for The Michael J. Fox Foundation

Bent Water decided to tap into the cause-focused, collaborative nature of the craft beer community in launching Common Hope, inviting breweries around the country to join them in making a beer and donating a portion of proceeds to The Michael J. Fox Foundation for Parkinson’s Research.

Bent Water created a recipe for the beer, a dry-hopped lager, inviting all participating breweries to customize their version and select the unique hops they would use for dry-hopping. Each variation of the beer will be called Common Hope and utilize the same label and supporting marketing assets to help spread awareness of the efforts.

“We are continuously inspired by our community and the many creative ways they are driving The Michael J. Fox Foundation’s mission forward. What better way to come together than to cheers with our friends at Bent Water Brewing Company and all participating breweries for our common goal to find a cure for Parkinson’s disease than with this Common Hope initiative,” said Liz Diemer, MJFF Vice President of Community Fundraising.

Since Bent Water Brewing’s inception in 2015, support for Parkinson’s research and those living with Parkinson’s has been a primary focus of its community involvement and cause projects.

“Parkinson’s disease has had a profound impact on many of us at Bent Water,” explained Aaron Reames, Co-founder and President, Bent Water Brewing. “My grandmother and my wife’s uncle both passed from it. A close friend of the brewery is living with it. Over the years, we’ve realized just how many of us at the brewery have had people close to us affected, from family to friends to former teachers, coaches, and mentors. This year we wanted to try and do even more for the cause than we have in past years and came up with the idea for Common Hope.”

“When we were considering the style of beer, a lager immediately came to mind,” stated Drew Yeager, COO and Head Brewer, Bent Water Brewing. “One of our goals with the Common Hope initiative is to increase conversations about Parkinson’s and help others understand that people who have it can still lead long, active, fulfilling lives – but they need our support. A lager seemed perfect for that type of conversation, and the dry-hopping opens the opportunity for each brewery to make their version unique to them.”

Bent Water will release its version of Common Hope on Saturday, April 16, in honor of Parkinson’s Awareness Month, with a celebration at its brewery. Additional versions from other breweries will be released in the following weeks and months.

“We’re extremely grateful for the positive response the initiative has received from so many breweries across the country,” continued Reames. “It’s moving to see how many people have been impacted by Parkinson’s and want to contribute to these efforts.”

Breweries across the country, stretching from northern Maine to southern Florida to the west coast have joined the Common Hope initiative, including 2nd Shift Brewing in St. Louis, Missouri; the Bronx Brewery in Bronx, New York; and Harpoon Brewery in Boston, Massachusetts and Windsor, Vermont.

Bent Water also recruited website, design, and marketing partners to give their time and talents to help launch the Common Hope initiative and make it a success: BLKDG and Kevin York Communications. Resource Label Group is supporting Common Hope by offering a discount on label printing for any participating breweries as well.