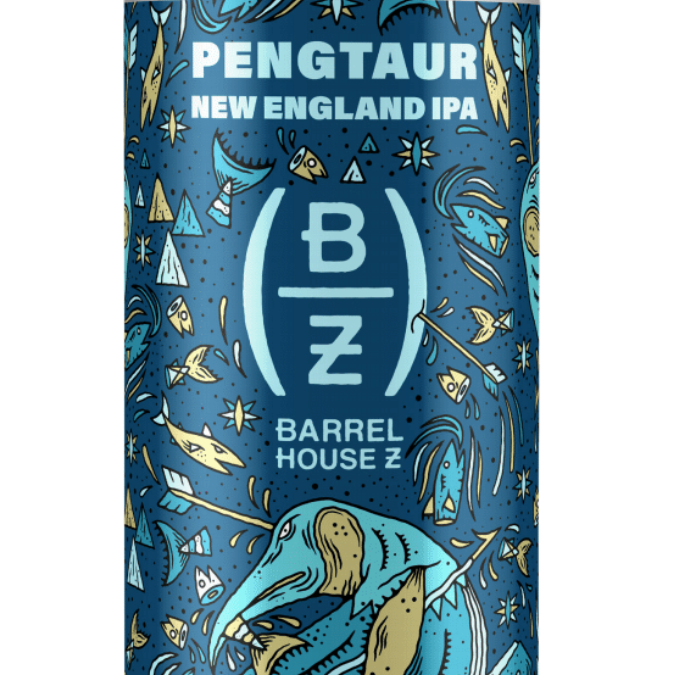 Since Barrel House Z is a Weymouth, MA-based craft brewery with over 3-years of brewing experience, it may be surprising that Pengtaur is BHZ’s first New England IPA can release. However, as Dan O’Donnell, President and General Manager of Barrel House Z said, “Our decision to wait to brew and package a New England IPA makes perfect sense to us. We don’t rush things at BHZ. We like to create and explore new ideas. The New England IPA is a very popular style—we wanted to be sure we had something new and meaningful to add to the conversation.”

Pengtaur–the beer, and Pengtaur–the mythical mash up of penguins and centaurs, both come from the unruly creative mind of BHZ brewer C.J. Falk. To ensure a BHZ-take on the super-popular New England IPA, Falk created a recipe that carves out a distinct and specific place in the NEIPA universe. Right haze. Right juice. Right acidity. The BHZ brew team tested the recipe in the pilot system over a months-long period, tweaking it in 2-barrel batches in preparation for the final 15-barrel brew.

With New England IPAs, hop selection is paramount. Pengtaur is dry hopped exclusively with Ella and Ekaunot, two hops rarely featured as stand-alone co-stars. A high concentration of Ella gives rolling waves of grapefruit and tropical fruit. Ekaunot also amps up the tropical fruit profile. Notes of candied orange and mango rise to the top, while a quiet zing of tart lime keeps the balance in check. Each sip delivers juicy ripe fruit along with bright grapefruit and lime zestiness. Which is, as O’Donnell notes, “Exactly why Ella and Ekaunot are so powerful together. Just like penguins and centaurs.”