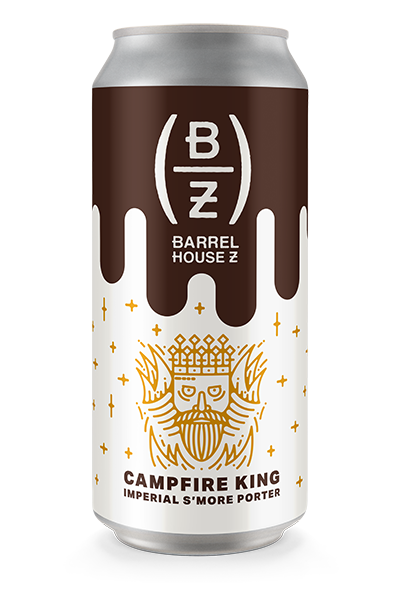 With its beautiful mocha-dark pour, Campfire King delivers an inviting aroma of chocolate laced with coffee. The flavor profile is built on deep, rich chocolate and balanced by a slightly roast-y char. On the palate, a holy alliance of chocolate, graham cracker, and vanilla-marshmallow comes together in each s’more-loving sip. Lactose sugars are added to elevate mouthfeel to its creamy fullest. The ABV comes in at a nice, warm 8.1%

As Barrel House Z’s President and General Manager Dan O’Donnell adds, “With or without a roaring fire, Campfire King is the best possible way to fight the approach winter’s chill—one delicious sip at a time.”

Founded in 2016, Barrel House Z is a brewery, taproom, and kitchen built around creatively conceived, small-batch, collaboratively brewed beer. The taproom is open:

Barrel House Z is located at 95 Woodrock Road in Weymouth.

In 1986, Russ Heissner came to Boston to be the first head brewer at Harpoon. In 2016, a new brewing adventure began in Weymouth, MA. The BHZ team brews small-batch, barrel-aged beer that’s created collaboratively with an ever-changing roster of innovative brewers. Our philosophy, however, never varies. We believe the best beer comes from exceptional ideas & ingredients–and is guided by rigorous technique. Our pilot plant is in constant motion. We tap a new Pilot Pour weekly, which means you’ll find 10 to 12 amazing brews in our tasting room. Always something new. We also brew for draft and cans.