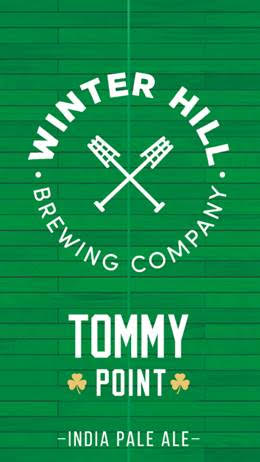 PRESS RELEASE / October 24, 2019 (Boston, MA) – Banners Kitchen + Tap celebrates the home opener for the Celtics with Winter Hill Brewery’s Tommy Point IPA. Banners will be the only account to have this beer from Winter Hill Brewing this week. It will be tapped tomorrow, Friday, and will be available until the keg kicks. Tommy Point will then be released in 16oz. cans and on draft more widely around November 5.

Tommy Point is named for former Celtics player and coach Tom Heinsohn. ‘Featuring 5 Hall of Fame ‘C’ Hops, this beer is all hustle and headed to the rafters.’

Named for the iconic championship team banners raised into the rafters throughout history, Banners Kitchen & Tap is located in the thick of Boston sports, on the former site of the Boston Garden, adjacent to the TD Garden and North Station at The Hub on Causeway.

Banners Kitchen & Tap is an immersive restaurant and bar featuring upscale tavern cuisine as well as classic game-day menu staples, healthy alternatives, a children’s menu, and many other unique offerings for lunch, dinner and brunch.

Representing Winter Hill since 2016, making real beer in small batches, pouring your morning coffee. You can find us in some of Greater Boston’s leading bars, restaurants and storefronts, in addition to our hip AF Somerville tap room.

Hustling from dawn til dusk to bring you the best.