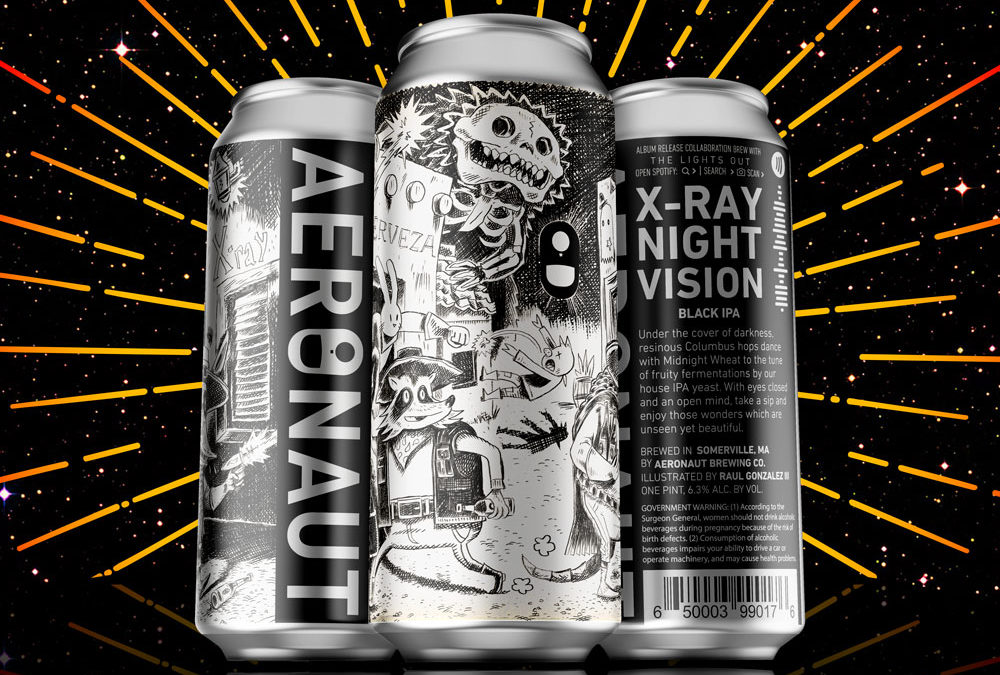 The Lights Out and Aeronaut made music and beer history when they released T.R.I.P., the world’s first album on a beer can. Now they’re back with Night Vision, a new collection of songs and a black IPA to match it.

“Rolling Stone reported 7 million tracks this year will be uploaded to Spotify. The Lights Out is reporting only 7 tracks this year will be uploaded to beer,” said The Lights Out guitarist Adam Ritchie. “Aeronaut is the first brewery to serve as a record label for multiple releases from a band. Last time, we went to them. This time, they came to us. That says a lot about their commitment to the arts.”

T.R.I.P., the band and brewery’s first collaboration, was a recipe for success. It took on an issue plaguing the music industry for decades, reintroduced the tactile element to new music discovery that’s vanished in the digital age, used technology to solve a problem technology created and turned the beer aisle into the next record store. It sold thousands of units, drew national coverage in culture, lifestyle, music, business, beer, food, beverage, technology, design, packaging, science and art media, and generated news as far away as Russia, Finland and Thailand. The band rose from playing clubs to theaters and the brewery attracted a new audience of indie rock fans.

“T.R.I.P. completely transcended the ordinary and set a new standard for how these things should be done,” said Aeronaut Co-Founder Ben Holmes. “Night Vision takes that approach and brings it somewhere new.”

Where T.R.I.P. used a hashtag on the beer label to trigger responses from the band’s Twitter account with an album link, Night Vision will use a Spotify code on the label, scannable within the Spotify app, sending users directly to the music.

The band describes Night Vision as “a kaleidoscopic collection of songs that moves bodies across genres and realities.” The brewery describes X-Ray Night Vision as a beer that “heightens drinkers’ ocular abilities to look inside an infinite sea of possibilities.”

The album was written in a parallel universe, recorded and mixed at Mad Oak Studios by Benny Grotto and mastered at Peerless Mastering by Jeff Lipton. The beer was brewed at Aeronaut under cover of darkness, with resinous Columbus hops, Midnight wheat and Aeronaut’s house IPA yeast, clocking in at 6% ABV.

“The brewers at Aeronaut were the first people outside the band to hear this record, and it guided our approach to this beer,” said Holmes. “When we showed the band the beer label art, they created a special track order to underscore the story told on the illustration. That’s a collaborative feedback loop! This project celebrates the boundless power of simple ingredients to create sensory journeys at new frontiers.”

“The Lights Out is always experimenting with ways to bring our songs to life, whether it’s inventing a wearable light show or pairing sound with flavor,” said Ritchie. “What makes this collaboration with Aeronaut so special is these aren’t just tribute beers; they’re the album. We might still be the only musicians and brewers approaching studio albums this way.”

The Lights Out is a music and light project which takes people on a trip through parallel worlds. The group blends genres and technology to reinvent the live band experience. Each song is a report back from an alternate reality, synchronized with 1,000 wearable LEDs. They’ve opened for Andrew W.K., Electric Six and members of Dream Theater, showcased at SXSW, been featured in Billboard and the A.V. Club, had songs on MTV and released the first studio album in history on cans of craft beer. http://thelightsout.com

Aeronaut is a craft brewery and foods hub under one roof. Its inspired team of brewers and scientists collaborates with farmers and food makers to drive the invention of craft beers and spur a renaissance of local victuals and industrial revitalization. http://aeronautbrewing.com

AUDIO:
Embeddable teaser track by The Lights Out: https://soundcloud.com/thelightsout/saturday-night-somewhere