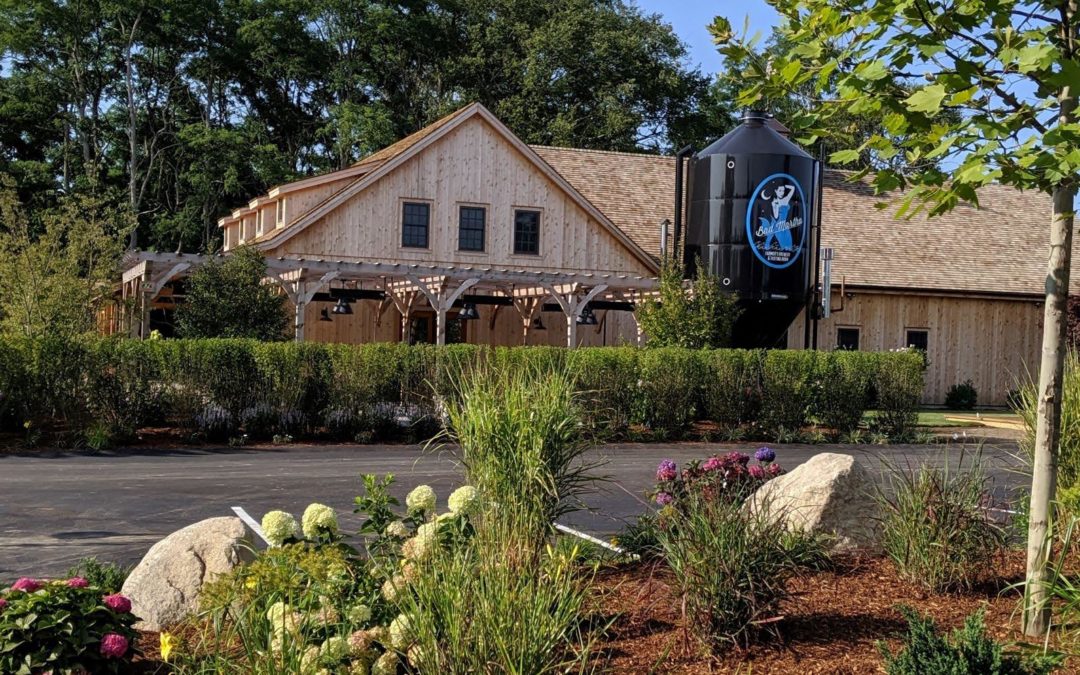 Bad Martha Brewing opened its first Farmer’s Brewery & Tasting Room in Edgartown, Martha’s Vineyard in 2014 and quickly became a top destination for thousands of craft beer fans annually.  The early success led to expansion to bars, retail locations, festivals and events on and off the Island.  Bad Martha is recognized for its delicious, award-winning and seasonal craft beers made with local ingredients.  Since 2014 the brewery has won eleven awards at the International Beer Festival, beating out many of the world’s best-selling beers.  All Bad Martha Beer is uniquely brewed with hand-picked wild grape leaves grown on Martha’s Vineyard, so there is a piece of the Island’s soul infused in every sip.

Bad Martha Brewing plans to now brew and can all its beer in the new, state-of-the-art facility in Falmouth and will continue to brew beer on premise at Bad Martha Farmer’s Brewery & Tasting Room in Edgartown for consumption in the taproom there.  Previously, the Company contract brewed its beers for commercial sale and distribution with Mercury Brewing in Ipswich, MA (Edgartown beer was not contract brewed, except for three flagship beers that became commercially available.)  While the Company is thankful for their support over the years, the beer has grown to a point that requires in-house brewing and canning.  The 15-barrel system at the Falmouth brewhouse can easily be augmented to a 30-barrel system to keep pace with growth.

“We are thrilled to welcome craft beer fans to our new brewery and hope it will become part of the Falmouth and surrounding area community,” said Jonathan Blum, CEO and Founder of Bad Martha Brewing.  “Of course, we’ll welcome tourists in season, and we hope this new brewery will earn the support of locals who are seeking a comfortable, laid back, family- and dog-friendly environment to relax throughout the week,” said Blum.

Visitors to the new Farmer’s Brewery can enjoy free samples of award-winning beer including seasonal varieties, purchase brew by the glass or a flight paddle and even take home a growler (64 oz. glass container) or a crowler (32 oz. can) or 4-pack, 16 oz. cans of select styles.  “We look forward to taking visitors on a tour of the brewery and they can even watch their favorite beer canned right on the spot to take home,” said Flanders.

Surrounded by beautiful landscaping, flowers, native plants, hops and herbs from Mahoney’s Garden Center, the brewery has a lush, beer garden atmosphere.  Guests will find plentiful indoor and outdoor patio seating; a tasting bar flanked with Bad Martha mermaid bar taps; barrel-top tables; a loft lounge area and a life-size sculpture of the mischievous Bad Martha mermaid herself.  Also new for the Falmouth location is a wood-burning firepit and outdoor space heaters to keep guests cozy on chilly spring and fall days.  The brewery plans to install big screen televisions in the fall for customers to enjoy sports with their local craft beer, pizza and other creations by the Chef.  There are bike racks plus ample parking and the building is handicap accessible. 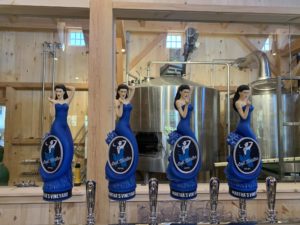 The star attraction at Bad Martha is the delicious, award-winning and satisfying beer created by Jacobi Reid, Master Brewer at both the Falmouth and Edgartown brewhouse locations.  “Our craft beers are made with the freshest and finest local ingredients from surrounding farms.  We plan to offer at least 16 different varieties of beer flavors and styles on a regular basis at the Falmouth brewhouse,” said Reid who personally selects the best ingredients including fruits, berries (cranberries, blueberries, beach plums, wild cherries and strawberries), Organic honey, chocolate, oysters and roasted coffee beans among others to incorporate into his tasty beer recipes.  Cranberries come from Reid’s family farm.  The signature ingredient to all Bad Martha beer is hand-picked wild grape leaves grown on Martha’s Vineyard.

2. Double Hoppiness – Double New England IPA Another new beer added to Bad Martha’s year-round lineup that is a bit bigger and packs even more flavor than the Snake Charmer. Made using Centennial and Amarillo hops, this beer is still very fruit forward with a little earthy hop character.  7.5% ABV.

3. Martha’s Belgian Wit – Belgian Wit A classic recipe perfected on the Island and moving to Falmouth. This hearty Belgian beer is made using orange peel and coriander. It has a medium body with wonderful orange juice flavors and a hint of coriander spice.  4.6% ABV.

4. Farmhouse Lavender Saison – Saison A new take on a traditional French farmhouse beer. Brewed with all traditional ingredients for a Saison but aged on lavender and rosemary grown by Mahoney’s nursery right next to the new Falmouth location.  6.2% ABV.

5. On the Half Shell – Imperial Oyster Stout Brewed on Martha’s Vineyard with Martha’s Vineyard oysters. Take an old school Imperial Stout recipe full of Oats and Chocolate malt, add in 2 bushels of locally harvested oysters, and you have a desert in a glass. A rich dark chocolate flavor, with a hint of sea salt, and a full body beer, your taste buds will be in heaven. (There will also be a few kegs that are put on Nitro to give this beer and even creamier and smooth mouthfeel.)  8.5% ABV.

6. Pursuit of Hoppiness – New England IPA The IPA is an experimental beer with rotating hops. Always brewed with the same malts and yeast, but every batch has different hops to always keep something new. Sometimes there are flavors of citrus and tropical fruits, other times it is very floral with hints of stone fruit. Make sure you keep coming back to try it over and over to find out which one you like best.

7. Shark Bite – Cucumber and Jalapeno Lager This light larger packs a big bite but finishes off smooth. The first sip starts with a jalapeno burn that quickly cools off with a fresh cucumber finish. With a very light body and so much flavor you will come back for sip after sip.  5.6% ABV.

8. Coast Ale – Light Hoppy Ale The beer was a collaboration between Bad Martha and the local Falmouth band Crooked Coast. It is a light-bodied beer packed with Citra hops to give it a great citrus hoppy flavor. A very easy drinking brew to go along with some of your favorite tunes.  5% ABV.

9. (508) IPA –American Style IPA Named after the Island’s eponymous area code, this beer is brewed with Warrior, Citra and Mosaic hops, has 7% ABV with 70 IBU’s and aromatics of grapefruit and tangerines. The flavor profile is tropical fruit and citrus with a subtle hint of a biscuit mallet backbone and finishes off with a little hop bite but no lasting bitterness.  It’s delicious alone or paired with food including spicy dishes such as ethnic foods, pizza or pasta.

10. Martha’s Vineyard Ale – English Special Bitters Bad Martha’s flagship beer teases the senses with a devilishly dark honey hue, a smooth caramel flavor and a seductive floral aroma.  Brewed with premium English malt, the finest English and American hops, Martha’s Vineyard Ale lures you in with an approachable flavor and light to medium body and has 5.3% ABV.  It is delicious to drink with steak, burgers, sandwiches, tacos and burritos.

11. Vineyard Summer Ale has 4.8% ABV and is made with premium Pilsner malt and Saaz hops to provide a bright golden glow, clean pilsner malt flavor and subtle Bartlett pear aromatics.  The beer’s refreshing, light body makes it the perfect ale to pair with seafood, shellfish or chicken dishes.

The brewery will be hopping throughout the year with live music by local Falmouth artists, weekly trivia contests with prizes, fun classes led by Bad Martha Master Brewer Jacobi Reid, old-fashioned board games like checkers, plus cornhole leagues, a bocce court, bingo and yoga among others.  The fun kicks off in high gear at the Grand Opening with popular local musicians, Brian Sances and Colin Bradley, as well as Paul Horton, and Brandon Manter.

It took more than a year of planning and a talented team to get the new brewhouse ready for the public.  Every aspect was meticulously thought out, from building design to construction, equipment, seating, local hiring, employee training plus beer and food recipe development. 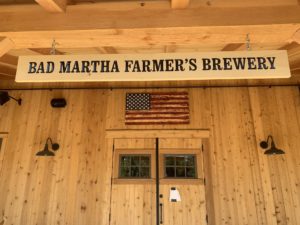 Just like the flagship location in Edgartown, the farmer’s brewery in Falmouth was designed by an award-winning Boston architect, built by the Amish in Pennsylvania and erected on site with local carpenters and construction crews.  Bad Martha’s signature post and beam barn design for Falmouth is larger with a 15-barrel brewing system that can expand to 30 barrels and incorporates new canning equipment that enables the brewery to brew beer freshly, right on the premises.  The mainland location helps Bad Martha Brewing broaden its distribution reach too.

Bad Martha Brewing moved into 16-oz. cans in 2018 based on the success selling Vineyard Summer Ale and because cans are better for beer freshness and are more environmentally friendly.

Bad Martha Brewing’s motto is Get Bad. Do Good.  The Company’s goal is to not only create delicious high-quality craft beers, but also run the business centered on socially responsible practices.  In addition to using the finest local ingredients found throughout Falmouth, it will provide spent grains to local farmers and give back to the community by donating a portion of profits to a local charity.  Among other charities, Bad Martha Brewing has already donated $17,000 to the Island Food Pantry on Martha’s Vineyard to help them in their mission to feed the hungry.  “We want to support the communities in which we live and do business and are we’re planning to identify a local area Falmouth charity to donate to once we are up and running,” said General Manager, Josh Flanders.

The brewery plans to give a discount to support those who give their service to the Falmouth community and our nation, including U.S. active duty military and veterans, teachers, police, fire and ambulance workers, on all non-alcoholic merchandise and food.  For updated details check www.badmarthabeer.com.

The Company has more exciting news on tap for 2020.  It plans to build the first, Bad Martha Oyster Shack for freshly shucked oysters plus daily and evening New England Clam Boils, and a Clambake once a week.  The Oyster Shack would be open in-season from Memorial Day through Columbus Day. 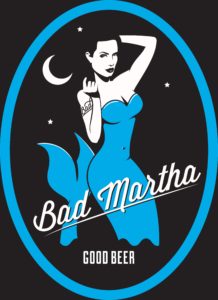 In addition to both Farmer’s Breweries, Bad Martha beer is available throughout Cape Cod and Boston’s South Shore. 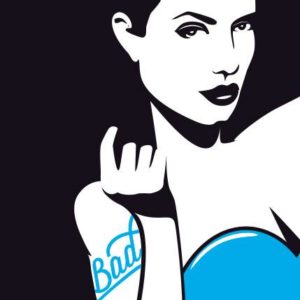 In 1602, mischievous winds drove Bartholomew Gosnold’s ship to Martha’s Vineyard.  As legend has it, he scoured the Island for ingredients to brew ale for his crew.  Alas, he found none…and he fell asleep on the shore one evening.  Under the light of the moon, he awoke to a sensuous mermaid with jet black hair and a devilish grin.  Sitting at water’s edge, she beckoned to Gosnold.  The closer he got, the further she swam away – tempting him to follow.  So, he did.  Finally, he found himself in a field brimming with lush Island grapes.  These would be perfect for wine, he thought.  But nay, he was a good Englishman, so these grapes became the secret ingredient for a robust, refreshing beer.  Gosnold never saw the mermaid again.  He went to his grave wondering if he ever saw her at all.  Today, we brew every handcrafted beer as Gosnold did, with grape leaves harvested on the Vineyard and a splash of mermaid mischief.  Naturally, we had no choice but to name our beer after the elusive siren who started it all.  Bad Martha.  www.badmarthabeer.com.  Bad Martha.  Good Beer.