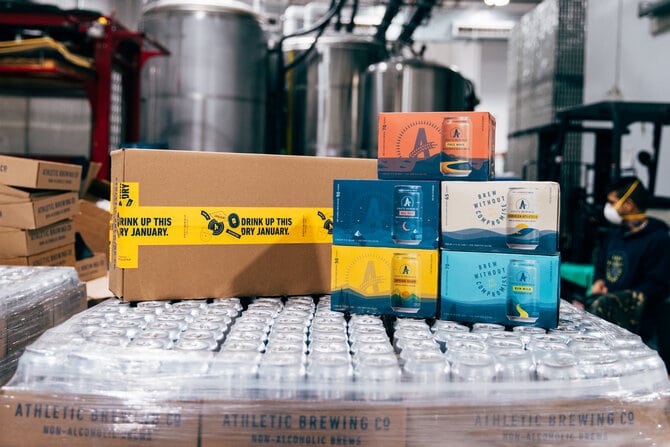 PRESS RELEASE December, 12, 2020 (STRATFORD, Ct. AND SAN DIEGO, CA) — The 12-months of 2020 have been 365 days to forget. While 2021 can’t arrive soon enough, flipping the calendar often means renewing an annual commitment to pursuing a healthy and active lifestyle. For some, this means beginning the New Year with a Dry January and for others, it means elevating their inner athlete to a new level.

Regardless of the motive, January is viewed as the month of giving things up – going on diets, cutting back on socializing, and reducing or eliminating alcoholic beverages. Too often Dry January is viewed as full of compromise and for many hard to sustain. Athletic Brewing Company, America’s first brewery dedicated solely to brewing nonalcoholic beers, is changing that thinking with “athletic” beers that are great tasting, low in calories, all-natural, refreshing, and just happen to be nonalcoholic.

In 2019, an estimated 69 million Americans (20 percent) went “dry” during January. According to Nielsen, 66 percent of U.S. adults, 21-34, are consciously reducing their alcoholic consumption.

“Athletic Brewing is focused on reminding beer lovers that being dry doesn’t have to be about giving something up and doesn’t have to end in January. It’s about living life to the fullest and above all, living without compromise to the best of your ability each and every day of the year,” said Athletic Brewing Co-founder Bill Shufelt. “Athletic Brewing will see a lift in sales from December to January when the rest of the industry’s sales go down. We are taking nonalcoholic beers out of the penalty box, creating new occasions for beer and more importantly opening the eyes of drinkers looking to maximize their performance in every facet of life.”

Beginning in December, Athletic Brewing is offering the Dry January Survival Pack, which will feature five six-packs of Run Wild IPA, Upside Dawn, Free Wave Double Hop IPA, All Out Stout, Cerveza Atletica, and a branded Athletic Brewing glass. The Dry January Survival Pack will be available at Athleticbrewing.com while supplies last. Each beer features fewer than 90 calories, the full-flavored refreshment of craft beer, all-natural ingredients, and no alcohol or hangover.  To receive the Survival Pack for the start of Dry January, consumers must order it by December 20, retails for $49.99.

The nonalcoholic beer market in the U.S. surged to $132 million in 2019 and, despite the pandemic, the nonalcoholic craft beer market is up 298 percent year-to-date. Athletic Brewing surpassed its 2019 brewing levels in May of this year and its sales are up 500 percent year-over-year. In just its third year of operation, the company has outgrown the 12,000 barrel capacity of its brewery headquartered in Connecticut and expanded its capacity by adding 125,000 barrels in its new San Diego facility.

Named by Fast Company magazine as one of the “World’s Most Innovative” companies in 2020, craft-beer fans can find Athletic Brewing’s revolutionary Upside Dawn Golden Ale and Run Wild IPA at major retailers in the U.S. They also ship directly to consumers at www.athleticbrewing.com where craft beer lovers can purchase Athletic’s full portfolio of flagship, seasonal, and specialty beers plus join the brewer’s subscription offering – The Athletic Club.

Athletic Brewing proudly donates two percent of all sales to trail and park cleanups through their “Two for the Trails” program and expects to contribute more than $500,000 to trails and other charities across the nation this year.

International Beer Challenge 2020  “Brewer of the Year North America”, Athletic Brewing Company is reimagining beer for the modern, active adult. Their great-tasting athletic craft brews let you enjoy the refreshing taste of craft beer, without the alcohol or the hangover. You can enjoy them anytime, anywhere, and still be healthy, active, and at your best; it’s the very reason they started brewing them in the first place. With custom breweries on the East and West coasts, their lineup has earned accolades throughout the industry, even against full-strength beers, including the 2020 World Beer Award Gold medal for Run Wild. To top it all off, as part of the Athletic Brewing “Two for the Trails” initiative, 2% of all sales are donated to causes and organizations that support healthy, outdoor, active living.

Whether you’ve decided to cut alcohol out of your life for good, for a night, or for just one drink, Athletic Brewing Company provides an option without compromises that you’re guaranteed to enjoy.