Another Beer Garden For Boston, This One on City Hall Plaza Featuring Wachusett 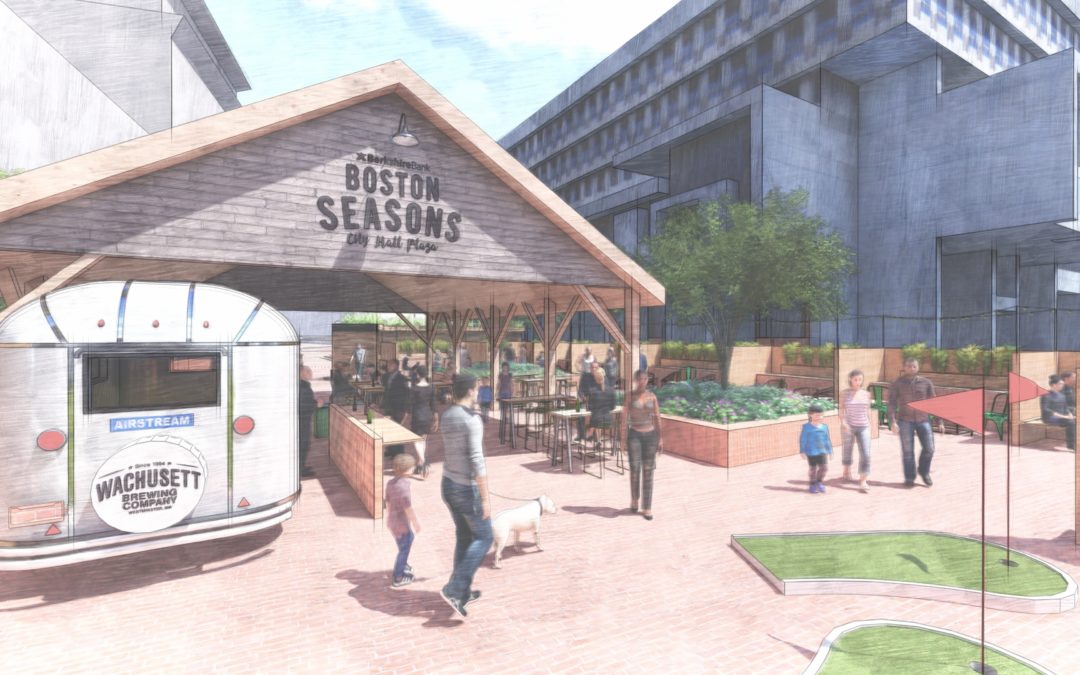 Set to Debut Friday, May 4

Boston, MA (April 19, 2018) – Mayor Martin J. Walsh and the City of Boston, along with Boston Garden Development Corp. announced on Thursday that the newest installment of ‘Boston Seasons presented by Berkshire Bank’ at City Hall Plaza will debut on May 4, 2018. Through a collaboration with Boston artist Jeff Smith, ‘The Patios’ presented by Berkshire Bank will reimagine the southeast corner of City Hall Plaza and feature design elements grounded in reclaimed wood, private patio appeal and the infusion of greenery.  The Patios is open to the public, will serve as a local gathering spot with nine custom patio areas, a main pavilion structure, and will house Wachusett Brew Yard, Honeycomb Creamery, and mini-golf stations.  Weekly ‘pop-ups’ at The Patios will include visits from puppies in partnership with Schultz’s Guest House, the Boston Public Library’s Bibliocycle and picnic promotions from Boston Public Market.

“We’re excited to welcome the next round of family-friendly and fun activations to City Hall Plaza as the weather continues to get warmer here in Boston,” said Mayor Martin J. Walsh. “Our partners at Boston Garden Development Corporation have shown the potential in making the plaza a downtown destination for all with a record number of visitors at Boston Winter this year, and I look forward to another season of success.”

Jeff Smith is a sculptor and filmmaker who built the ‘Smallest House in the World’ and is now on a mission to popularize the perfect shape.  Smith was commissioned to collaborate on a vision and provide design elements to The Patios, including an art installation entryway and patio design made of local, reclaimed wood which will display a refreshed BOSTON sign.  Circle B Barn Company, based out of Lexington, constructed the main building that will provide visitors a spot to gather at The Patios, rain or shine.

“We couldn’t be more excited to launch this unique and reimagined area, ‘The Patios’, through our continued partnership with the City of Boston and Boston Garden Development Corp,” said Michael Daly, CEO for Berkshire Bank. “Having recently relocated our corporate headquarters to Boston and the completion of the acquisition of Commerce Bank, we can’t wait to join in on the fun at The Patios, located at the heart of this great City and now our official headquarters for both work and play.” 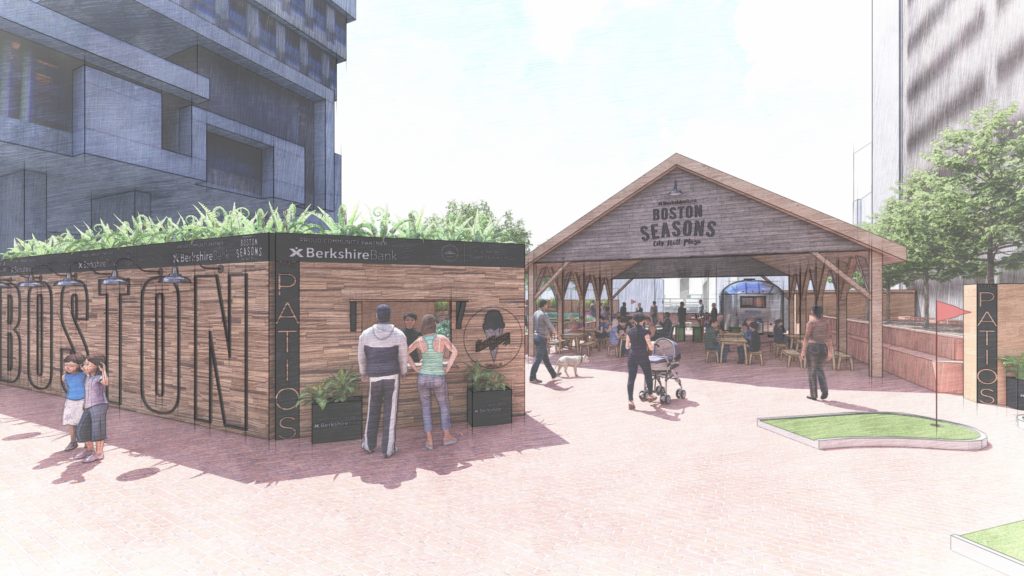 Wachusett Brewing Company is proud to return to the plaza with its iconic Airstream trailer to offer pints on The Patios, beginning every weekday at 4pm and 11am on weekends. Wachusett will rotate a wide selection of its own beer on tap and will also feature several guest brewery tap takeovers to expand the wide variety.  In concert with the City of Boston’s food truck program, The Patios will serve as a daily destination for picnics on The Patios and Honeycomb Creamery based out of Cambridge, MA will operate a pop-up ice cream shop at the entryway.

“We are excited about our latest effort to transform City Hall Plaza and debut ‘The Patios presented by Berkshire Bank’, open and available to all this spring and summer,” said Amy Latimer, president of Boston Garden Development Corp.  “Like the rest of Boston, we are ready for spring – and what better way to celebrate than with outdoor patios, pints and puppies.”

In addition to daily programming, weekly pop-ups will appear at The Patios throughout the summer months, such as ‘Wag Wednesdays’ in partnership with Schultz’s Guest House, a dog rescue based out of Dedham, MA. Visitors can meet and play with puppies every Wednesday from 12-2pm and be connected with more information on rescuing animals. Five mini-golf holes will be free for public use, the Boston Public Library’s Bibliocyle will visit weekly with books from a variety of genres, offer library card sign-ups and present storytime sessions, and Boston Public Market will provide picnic menus, samples and giveaways.  Additional activities will be added throughout the season.

‘The Patios’ presented by Berkshire Bank will officially open on May 4.   Located in the center of the City and just steps from the MBTA’s Orange and Green lines, The Patios will serve as an urban oasis for residents, commuters, and visitors offering daily programming for everyone from picnics, pints, putt-putt and more.

For more information, including the schedule of events, please visit: www.CityHallPlazaBoston.com.

‘Boston Seasons presented by Berkshire Bank’ is part of a three-year plan created by Boston Garden Development Corp. and the City of Boston Property Management Department to revitalize the existing plaza at City Hall and create a vibrant welcome public space for all.

Boston Garden Development Corp, a subsidiary of Delaware North, is overseeing the efforts as the City’s selected vendor to enhance City Hall Plaza.  Delaware North is one of the largest privately-held hospitality and food service companies in the world. Founded in 1915 and owned by the Jacobs family for 100 years, Delaware North has global operations at high-profile places such as sports and entertainment venues, national and state parks, destination resorts and restaurants, airports, and regional casinos. Learn more about Delaware North at www.delawarenorth.com.

Jeff Smith is a sculptor and filmmaker who built the ‘Smallest House’ in the World and is now on a mission to popularize the octahedron, the perfect shape. He has created sculpture using salvaged material for 30 years, way before it was cool. Smith lives in Boston with his wife and two children.

The company produces a diverse, award-winning line of beers ranging from their best-selling Blueberry Ale to their highly-rated New England Style IPA Wally. WBC is the second largest packaging brewer in Massachusetts and was named among the top 50 largest craft breweries in the US in 2017.

Honeycomb Creamery was started in 2015 by husband and wife, Rory Hanlon and Kristen Rummel. Their shop is based in Cambridge, MA, where they create small batch ice cream and cones from scratch. Honeycomb Creamery creates unique flavors inspired by their own imaginations and made with only locally sourced, in-season ingredients.

Shultz’s Guest House is a 501c3 dog rescue shelter, located on 200 private acres in Dedham, MA. Its mission is to provide rescue for lost, homeless and abandoned dogs in the southern part of the country, where both veterinary care remains commonly unaffordable and animal protection laws remain dormant; to provide for the medical care, sheltering, and transport of such dogs to our Dedham, MA facility, where we can further manage their healthcare, provide socialization, introduce human trust, and promote spaying/neutering as a means to end the suffering of pet overpopulation and unwanted dogs; and to focus on adoption of healthy puppies and dogs into loving, forever homes.