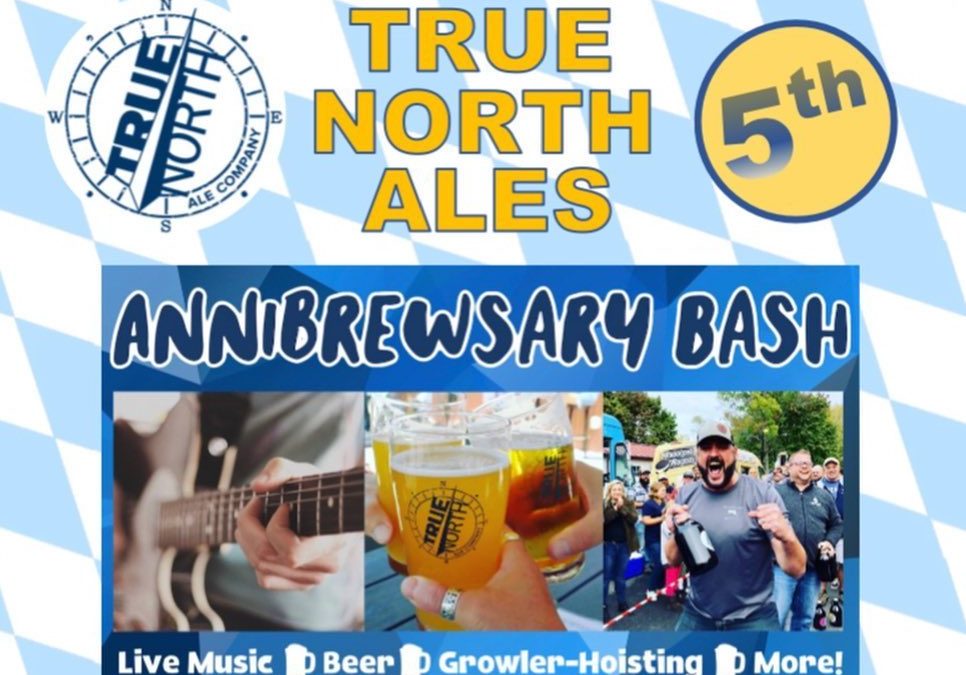 PRESS RELEASE / October 7, 2022 (Ipswich, MA) – On Saturday, October 15th we at True North Ales will celebrate our 5th anniversary. And we’d like you to participate. We call it our anniBREWsary, as it is the anniversary of our first brew session, the day we actually became a brewery. And the weather is better in mid-October than it is in November when we first opened the doors for business.
That day five years ago we had just four beers available — Cerveza Mexican Lager, Vincianne Belgian Blonde, North Shore Hazy Session IPA, and Squared Double IPA. Since then we have brewed more than 125 different recipes. Cerveza has won gold and silver medals at GABF and Vincianne earned gold at the World Beer Cup. We introduced Northern Haze in 2018, now our flagship offering and winner of a bronze medal at the GABF last year. Squared has been retired and replaced by Forest Haze. Each of the beers mentioned will be on tap next Saturday, along with fifteen more, including five German brews for an extended Oktoberfest celebration. And just for fun, we will also release three new beers that day.

The party begins at noon. Food trucks all day. The first band plays at 3pm on the patio. A growler hoisting competition kicks off at 5pm. And the featured musical group, The Far Out Band, will start playing on our indoor stage at 8pm. Grab some friends and join the fun!

About True North Ale Company
True North Ale Company is located in Ipswich, Massachusetts. Opened in 2017, its beers have been poured in more than 1,600 bars and restaurants and sold in nearly 1,700 stores in Massachusetts, Rhode Island, and New Hampshire. The brewery has won major international awards, to include a Gold Award at the 2018 World Beer Cup and Gold, Silver and Bronze Medals at the 2020 and 2021 Great American Beer Fests. It was voted Best Brewery on Boston’s North Shore four consecutive years. Its North Shore location features 200+ seat open-air and tented patios and 200+ seat indoor seating. The events venue, The North Side, may host events with more than 250 guests.