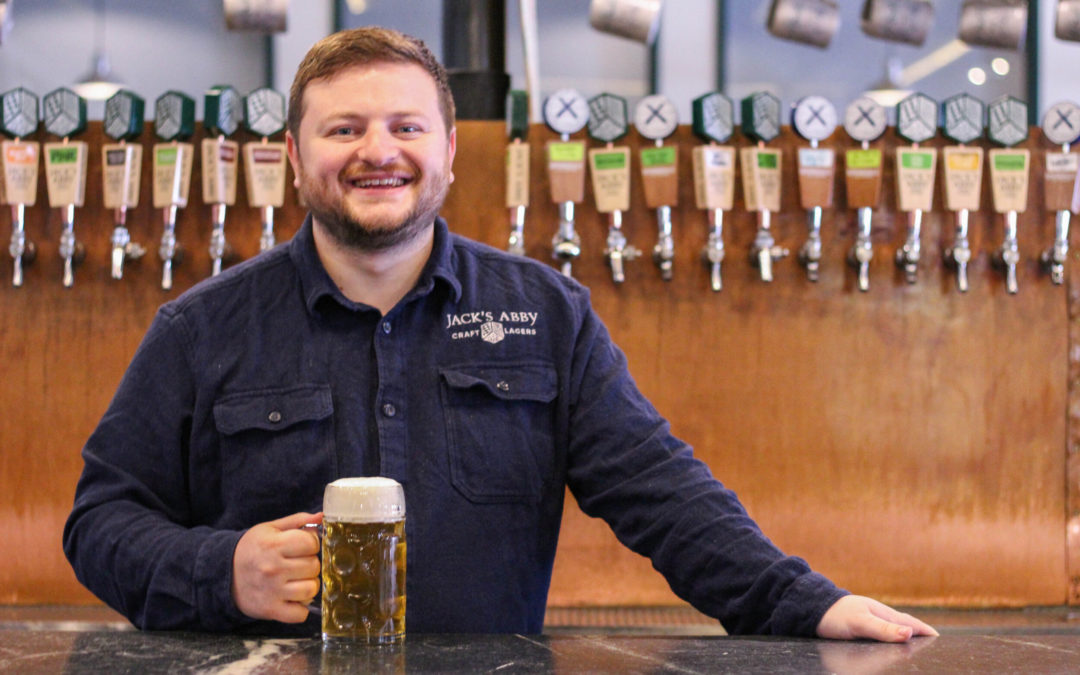 PRESS RELEASE / January 2020, (Everett, MA) – A new president, along with several new board members, were announced to more than 150 brewers from across the state at the annual Mass Brewers Guild’s (MBG) kickoff member meeting for 2020 at Night Shift Brewing Co.

The MBG is the state’s membership-based trade association that works to protect and promote the interests of craft brewers across the Commonwealth.

Sam Hendler, co-founder of Jack’s Abby Craft Lagers, is taking over as President of the MBG from Rob Burns, co-founder of Night Shift Brewing.  President since Fall 2016, Burns worked to bring new energy and a stronger sense of community to the state. During his tenure, he hired the organization’s first fulltime Executive Director, grew membership, built a new board, and spent a considerable amount of time on Beacon Hill advocating for brewer’s rights.

Burns will remain as a part Guild leadership on the board and will continue to help drive the government affairs committee, but with his growing family and business, he opted to step back from his President role and put forward Sam Hendler to take his place.

“It’s good timing for me after three years of work to pass the reigns on,” says Burns. “Sam is highly capable of excelling in this role and has the passion to make sure the Guild can continue to promote and protect the state’s craft beer industry. He’s stepped up in a big way and is a true leader for all brewers in Massachusetts and beyond.”

Since joining the board in Fall 2016, Hendler has served as Treasurer while also co-leading the organization’s Government Affairs initiatives. During his time as Treasurer, Hendler has been a major player on the Hill, forming relationships with influential representatives with a strong understanding of all of the laws and issues that are impacting the industry. Hendler’s nomination was unanimously approved and seconded by the Guild’s Board of Directors.

“Rob has done a tremendous job bringing the Guild to where it is today,” says Hendler. “The MBG is stronger and more effective than ever before thanks to his leadership. I am honored and excited to get the opportunity to continue to build on this solid foundation by promoting and fostering comradery in the craft beer industry.”

The board also unanimously voted to keep Keith Sullivan, co-founder of Medusa Brewing Co., in his Vice President officer seat and added Adam Romanow, founder of Castle Island Brewing Co., to the role of Treasurer.

Two new additions to the Mass Brewers Guild’s Board of Directors include Dani Babineau, CEO of Redemption Rock Brewing Co., and Kelsey Roth, GM of Exhibit ‘A’ Brewing Co., both of whom serve on the MBG’s Diversity and Inclusion committee and have been very active and impassioned advocates for the association’s programs, fundraisers and mission.

“We have a very strong board with diverse skillsets, expertise and years of experience in the industry,” says Katie Stinchon, Executive Director of the Mass Brewers Guild. “With so much growth and change happening in the industry, it’s important to have the thought leadership we have behind us guiding the future of craft beer. We’re excited to get to work to make our community bigger and better in 2020.”

About the Massachusetts Brewers Guild

The membership based association is open to all Massachusetts breweries licensed by the federal Tax and Trade Bureau and the Commonwealth’s Alcoholic Beverages Control Commission and is a 501(c)(6) non-profit corporation.

At the time the MBG was formed there were only 34 brewing licenses issued in the state. Today, there are more than 200 operating breweries across the Commonwealth including brewpubs, farm-breweries, and manufacturers.