15 Massachusetts Breweries Closed in 2021, An All-Time High: Here’s Who, and Why 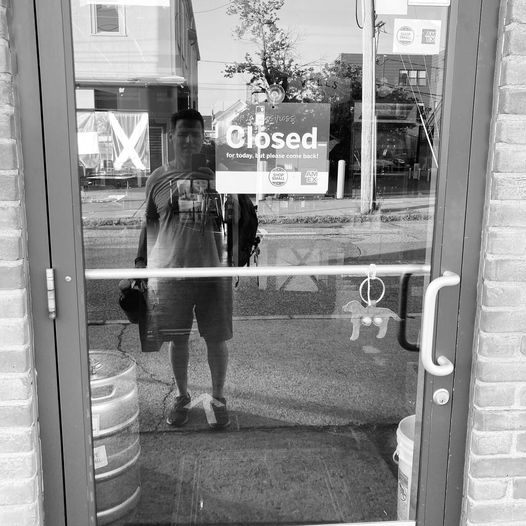 In what may likely be the new normal for the Massachusetts craft brewing industry, 2021 experienced a net gain or growth of just 4 breweries: 19 openings and an all-time high 15 closures, running the state’s current total to 214. See the infographic below for a breakdown of breweries by type or classification. By new normal, we mean that while new breweries will continue to open, it seems logical that nearly as many are likely to close because the industry itself isn’t growing much these days, at least not in terms of overall beer production and sales. Market share has become the all important consideration, which means that as certain breweries open and/or grow, others will invariably sell less beer and eventually close. It’s not a bubble, but it may very well be that we’ve reached a saturation point. Here’s the list of 15 Massachusetts breweries or brands that buckled under that pressure this past year. 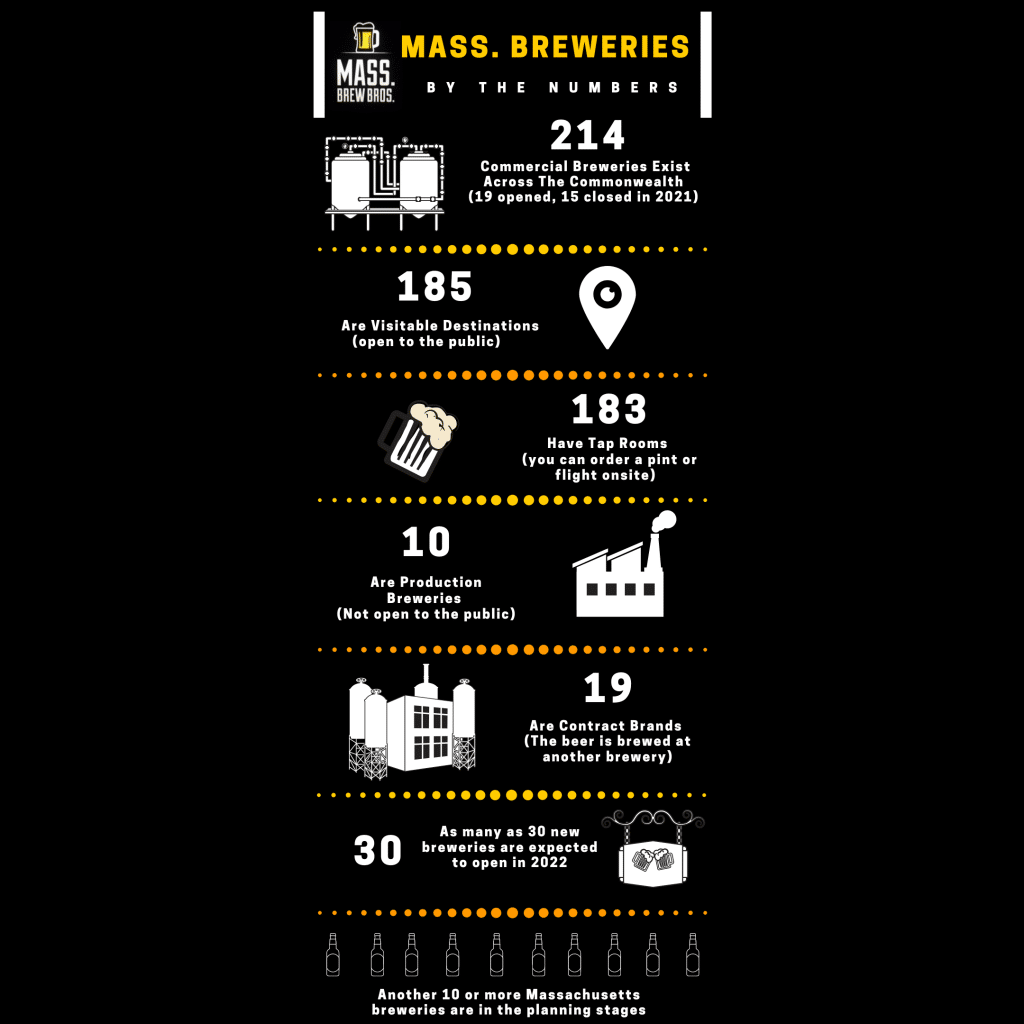 State brewery totals are reported quarterly through collaboration between the Mass. Brew Bros. and the Mass Brewers Guild.

Amherst’s High Horse, which closed down shortly after the start of Covid back in 2020, has not re-emerged. Truth be told, it was more of a bar in recent years anyway, offering only a few contract-brewed house beers among its more extensive beer list. The former brewpub had sold off its brewing equipment several years ago.

Another closure (or long hiatus) that we didn’t officially report on in 2020 was that of Article Fifteen Brewing in Weymouth. According to a Facebook post, founder Leo Reardon originally planned to open in Rockland in the first quarter of this year, but permitting snags have resulted in significant delays. The new space is located at the former Kathy Corrigan’s School of Gymnastics at 406 VFW Drive, and is more than triple the size of the former brewery. It’s been more than a year since Article Fifteen has been able to brew any beer (hence we list them here as a closure), but Reardon recently informed us that he’ll soon be running test batches on the new system and hopes to have beer available for retail sale in early 2022.

Wachusett Brewing‘s satellite brewery in the former John Harvard’s Brewhouse space in Harvard Square quietly closed in early 2021, just a couple of months after opening. Given the circumstances surrounding Covid, the timing couldn’t have been worse for the windowless basement brewpub location.

Arguably the most high-profile closing in 2021 was that of Boston Beerworks, which had opened its original Fenway brewpub back in 1992 when the state had a mere 10 breweries. Neither of the Boston Beerworks locations had actually brewed its own beer on premises in some time, but instead had relied on the Lowell and Framingham locations for their production. We removed them from the official brewery list at the end of 2020, but the official announcement that the remaining Boston locations wouldn’t reopen was still disappointing given their status as one of the OGs of the Massachusetts brewing industry.

Gloucester’s iconic Cape Ann Brewing announced its permanent closure in January, expressing gratitude for its nearly two decades of success in the seaside city. While no official explanation was given for its closure, its fair to speculate that the myriad of industry changes, including the emergence of an ultra-competitive distribution landscape, combined with the challenges of running a restaurant during a pandemic, presented insurmountable business challenges. 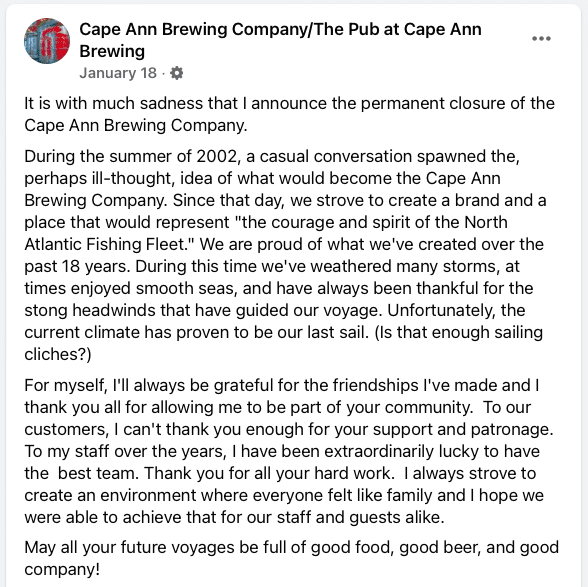 Another iconic brewing space that long-time beer aficionados will remember, DIY brewing operation Barleycorn’s in Natick, closed in July. Having come under new ownership in 2018, it officially changed its name to The Kells Beer Company and added a brewery license that allowed its owners to brew and sell their own beer for retail, but neither its taproom retail beer sales, nor its previously existing DIY component faired well during the pandemic.

Though no official announcement was ever made, we’ve confirmed that well known contract brand Brewmaster Jack is defunct, at least for now. Fans of the brand have know for some time that their favorites were no longer being stocked on beer store shelves, but the facility where the beer was brewed for the last several years, Brewmasters Brewing Services, purchased the branding rights (and recipes) and says it may release some of its flagships at some point in the future.

Two other contract brands, short-lived Off the Cuff and better known Shakesbeer, went all of 2021 without producing any beer, so we’ve removed them from the state’s brewery totals until further notice. Off the Cuff appears to have run its course, but the future of Shakesbeer is less certain. Founder and brewer Mike Sartor said in an email that he’d taken a production hiatus for the past 15 months because it was tricky to effectively market the beer in a world without tastings and beer festivals, which were among his favorite parts of the job. “We’ll think about picking up production again sometime in 2022, depending upon what the post-COVID beer world looks like” Sartor told us, adding that he’s still looking into the idea of opening a taproom in the not too distant future.

Several somewhat obscure nano breweries were dormant in 2021 as well, and have subsequently been removed from the state’s official listing. Northampton-based Bear and Bramble, Homefield Kitchen & Brewery in Sturbridge, Ware’s UNSUB Brewing and Merrimac Brewing in West Newbury haven’t produced commercial retail beer in more than a year. No word on the future of the latter two, but Bear and Bramble is reportedly searching for a space to open a brewery and taproom in Western Mass.. As for Homefield, the marketplace and cafe portion of the business has moved to Worcester, leaving the building to be occupied by Rapscallion Brewery which plans to open a pub (full liquor license but no brewing on premises) and kitchen in January 2022. 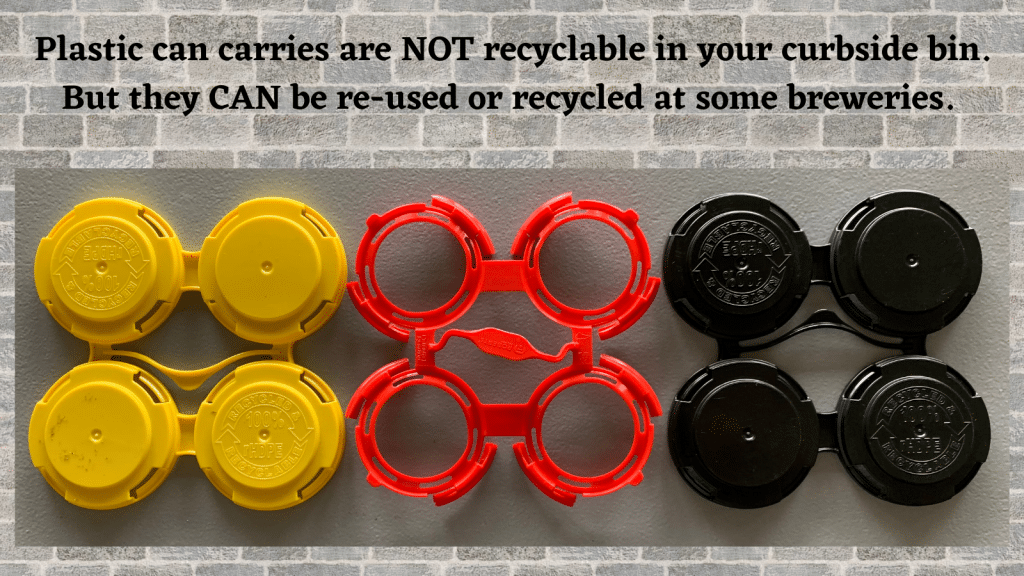 Norwood’s Percival Brewing closed suddenly in early October, posting an explanation on its Facebook page referencing apprehension about signing another lease. Founder Felipe Oliveira plans to open again in a different space and is actively shopping for properties, preferably to buy rather than lease. It doesn’t appear that Percival will be brewing or selling beer in the near future, though merch is going to be available through a new on-line store this spring.

According to founder Dave Howland, Worcester’s 3cross Fermentation Coop “is essentially on indefinite hiatus as of now. We are in the process of adding a new element in its place, but aren’t ready for a formal announcement yet.” We’ll be sure and post any future news when it comes our way.

Last but not least, sought after and mysterious Henry and Fran Brewing offerings (typically only atainable through pre-ordered pickups at the West Boylston brewery) have been unavailable for a full year now. Rumor has that founder and brewer Zach Laegel has decided to no longer keep a regular production schedule, instead focusing on other pursuits and brewing only when he feels the inspiration. Die hard fans should keep an eye on the brewery’s Facebook page, but it hasn’t posted anything since this time last year.