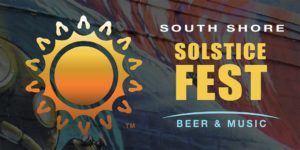 South Shore Solstice Fest is a hyper local brew and music fest like no other you have been to. They are hosting the top breweries of the South Shore for a craft beer tasting experience of more than 24 different beer selections. Along with an amazing beer lineup, they are also welcoming five top local bands to lay the musical backdrop of the day. Line the whole event with local food trucks and the stage is set for an epic experience.

You have three ticket options available:
Music + Beer Tastings – A general admission ticket gets you access to the festival and sets from all five bands. In addition, you will get 10 4oz tasting tickets for sampling brews. You will also get a branded taster cup and beer guide.

VIP Music + Beer Tastings – A VIP ticket gets you into the festival an hour early where you can chat with the brewers and get an early taste of the brews . Along with the 10 4oz tasters, you will also get an additional a 16oz pour as well as a souvenir stainless steel festival pint glass.

Music Only – Love the music but don’t want to sample beer from our brewers? No problem, our music only ticket lets you into the fest where you can see all the music and buy full pours at the bar.

The fest is being held at the newly reconstructed Paragon Boardwalk in Hull. Paragon Park has a rich history from years past when it was a thriving amusement park right on the ocean. Opened in 1905, it entertained generations of families for over 80 years. New owners of the property have breathed fresh new life into the space keeping with the nostalgic feel of the old park. We are excited to partner with them in bringing this festival to Paragon.

So kick off the summer with them celebrating all the South Shore has to offer in sun, music, beer and food!