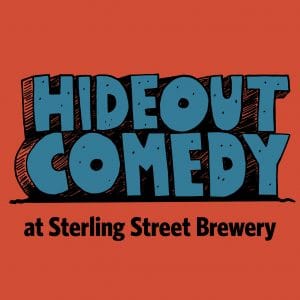 Boston Comedy staple Hideout Comedy Club is expanding to Clinton MA! Sterling Street Brewery will be bringing some of the best comedians in the country to their brewery. Past performers have been featured on Conan, SNL, Comedy Central, and more!
This November they welcome headliner Raanan Hershberg! Raanan Hershberg is a loud, neurotic Jew from Louisville, KY. He recently made his national television debut on The Late Late Show with James Corden. In 2017, he was a finalist in StandUp NBC and The Laughing Skull Festival in Atlanta, GA. In 2018, he was a finalist in the Boston Comedy Festival. He regularly opens for Kathleen Madigan in sold out theaters across the country. His first album Self-Helpless climbed all the way to the top of the iTunes Comedy Charts. His comedy has been featured on “Laughs” on FOX and is regularly played on Sirius XM. He recently premiered his latest solo show OFF THE GRID in the New York International Fringe Festival, which was called ‘One of the best one-man shows you are likely to see anywhere’ by Hy Bender in bestnewyorkcomedy.com.
Doors open at 7pm and the show starts at 8pm.
Tickets are $10/each. To purchase tickets, please visit: www.eventbrite.com/e/hideout-comedy-presents-raanan-hershberg-tickets-197004464657
+ Google Calendar+ iCal Export