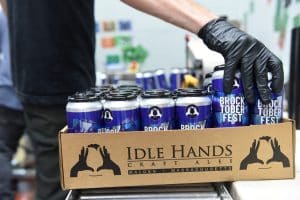 It’s officially Brocktoberfest season! Join Idle Hands in their Taproom for the release of Brocktoberfest!
Brocktoberfest is their interpretation of the festival lagers served during Oktoberfest in Munich. These beers have become drier over the years with less caramel character, but their version retains the malt complexity for which the style is known.
Bonus, Life.Love.Cheese. will be in the Taproom starting at 4pm selling charcuterie plates!