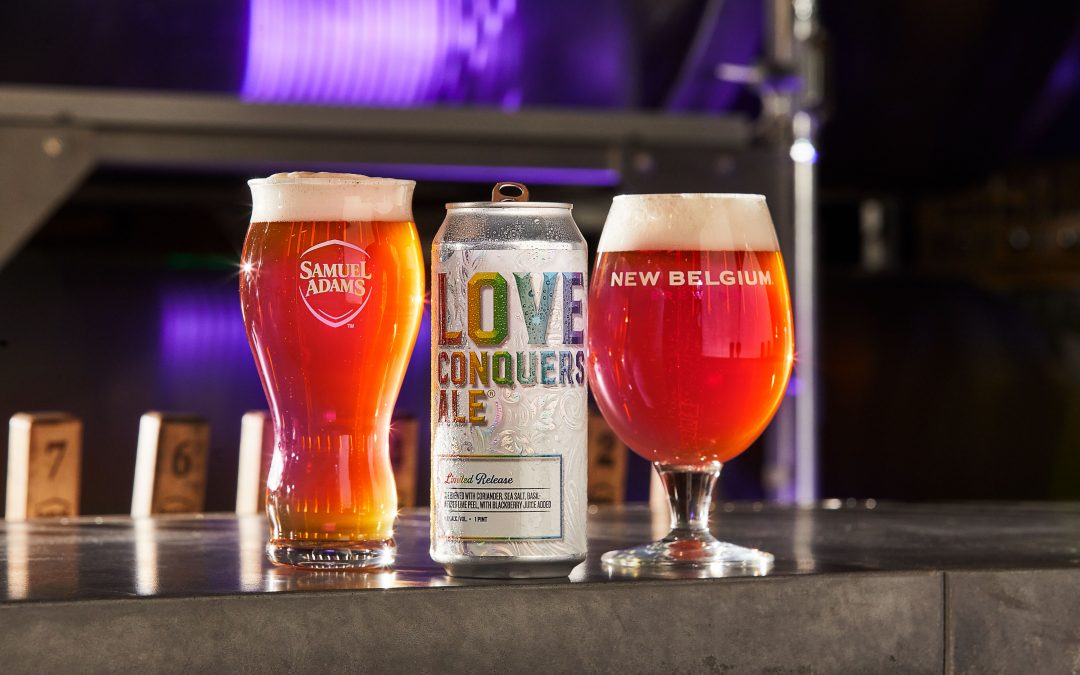 The two brewers join forces to share the love and co-brew Samuel Adams’ annual Pride beer, with 100% of the proceeds going to support GLAAD and the LGBTQ+ community

PRESS RELEASE / June 2, 2021 (Boston, MA) – Today, two of the leading American craft brewers, Samuel Adams and New Belgium Brewing, announce they are partnering for Pride to help spread a message of hope, love and inclusion through beer – something that has brought people together for centuries.

Both brewers share a commitment to fostering an inclusive setting for coworkers, partners and drinkers that supports and celebrates the LGBTQ+ community. This laid the groundwork for Samuel Adams and New Belgium to “share the love” and co-produce Love Conquers Ale, Samuel Adams’ hallmark Pride beer recipe.

As part of this partnership, during the month of June, Samuel Adams and New Belgium will donate 100% of the purchase price of the co-brewed Love Conquers Ale directly to GLAAD, a leading nonprofit organization working to accelerate acceptance and advance equality for the LGBTQ+ community. From brewing better beer, to building a better community and bettering each other, Samuel Adams and New Belgium know that by working together they can make a greater impact.

“We knew we had to do something powerful this year to bring the meaning behind Love Conquers Ale to life,” says Carissa Sweigart, Leader of Diversity, Equity & Inclusion at The Boston Beer Company. “We couldn’t think of a better brewer to share such a personal and special recipe with than New Belgium Brewing – a team with a long standing history supporting the LGBTQ community. By co-brewing Love Conquers Ale together, we hope to spread unity, love and togetherness to even more people. And we’re proud to continue to support the important work of our partners at GLAAD, who are at the forefront of change, as we celebrate our peers as members and allies of the LGBTQ+ community.”

“Beer is universal, represented across countries, cultures, and people. Our ongoing work is to make sure that beer represents and celebrates everyone, both inside and outside our industry,” says Patrice M. Palmer, New Belgium’s Diversity, Equity, and Inclusion Specialist. “New Belgium was the first craft brewery recognized by the Human Rights Campaign as one of the Best Places to Work for LGBTQ+ Equality, and our “Brewed for All” mentality informs our efforts to support and advocate for the LGBTQ+ community. We’re happy to join Samuel Adams in co-brewing Love Conquers Ale this year to support GLAAD’s important work to increase awareness, visibility, and acceptance of the LGBTQ+ community all year round.”

BEHIND THE BEER: LOVE CONQUERS ALEFirst brewed in 2017, Love Conquers Ale has always intended to do what beer does best: bring people together. Samuel Adams Boston Brewery coworkers first concepted the Blackberry Basil Lime Gose for a Pride celebration at the brewery. Love Conquers Ale, brewed by and for the LGBTQ+ community, is meant to represent the spirit of Pride and brings unique ingredients together harmoniously to create a beautiful beer. The bright fruit notes, refreshingly light body and pink hues make it the perfect brew to celebrate love. To grow the reach and impact of this special beer, in 2021 Samuel Adams connected with New Belgium Brewing Company to share the love, based on New Belgium’s leadership on LGBTQ+ equity and advocacy.

During the month of June, Love Conquers Ale will be available for drinkers to purchase at the following locations:

More information can be found at the following links: Samuel Adams | New Belgium

Love Conquers Ale will be available in 4-pack 16oz cans and Samuel Adams and New Belgium will donate 100% of the purchase price of every 4-pack to GLAAD during the month of June.*

*New Belgium Brewing Company will donate 100% of the purchase price of each Love Conquers Ale 16oz can sold at participating locations to GLAAD. For more information on GLAAD, please visit https://www.glaad.org/. Maximum donation is $10,000. Offer only valid at participating New Belgium locations between June 1 – June 30, 2021.

BRINGING MORE INCLUSIVITY TO THE BEER INDUSTRY AT QUEER BEER FESTSamuel Adams and New Belgium will also celebrate their shared commitment to the LGBTQ+ community through beer at Hop Culture’s Queer Beer Fest, which will be held virtually on Saturday, June 5th. The event aims to capture the unique, vibrant and diverse voices of the queer community and build a stronger culture of inclusivity in the beer industry.

New Belgium Brewing is recognized as a leader in sustainability and social responsibility. Founded in 1991 in Fort Collins, Colorado, the company expanded to Asheville, North Carolina in 2016, Denver, Colorado in 2018, and San Francisco, California in 2021, and is now the 4th largest craft brewery in the U.S. Dedicated to proving that business can be a force for good, New Belgium is a Certified B Corp and was the first brewery to join 1% for the Planet. The brewery has donated over $29 million to charitable causes since 1991. New Belgium is famous for its flagship beer, Fat Tire Amber Ale, along with year-round favorites like Voodoo Ranger IPA, Sour IPA, and La Folie Sour Brown Ale; as well as an award-winning wood-aged sour program and innovative limited release beers. To learn more about the full product lineup and New Belgium’s Human Powered Business model, visit NewBelgium.com.