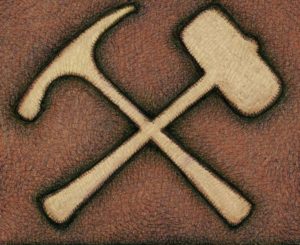 This weekend (Nov 13-14th) Stoneman Brewery is reopening after being closed due to the pandemic.
This weekend is Stoneman Brewery’s 9 year anniversary and is on the Crafts of Colrain Open Studio Tour which takes place the second weekend of November each year.
For the anniversary Stoneman is releasing the “Return of Stoneman” IPA along with a few other special beers using nearly 100% local ingredients.
Common Capital helped out this spring with lending money so the necessary upgrades could be made to re-open the small nano brewery on the Colrain location.
This year Stoneman brought back the Beer CSA and is now taking orders for 2022’s Beer CSA.  People can come up this weekend to sign up or also visit our website (www.growbeer.com) to join.  Stoneman Brewery was the first brewery in the country to start a Beer CSA.
Starting next year the Brewery will be open to the public the first weekend of every month for direct sales.  In the past the brewery was only open to the public one day a month for CSA members  or by appointment only.  Stoneman will also be starting a small beer garden in Colrain next summer.
Stoneman was working on a much larger expansion but the pandemic severely affected the plans.  The brewery still remains a one man show where owner Justin Korby produces the beer, bottles and markets by himself with some help from his family.
This upcoming weekend Stoneman Brewery will be open from 10-4pm @ 20 Stetson Brothers Rd Colrain MA.
+ Google Calendar+ iCal Export