Kafka Day 2020: Crawfish Boil and First Ever Can Release! 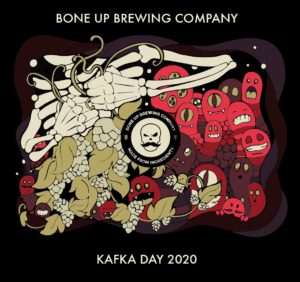 If you’ll recall from the heady days of “last year,” this is around the time when Bone Up Beer was wrapping up all the assorted loose ends and miscellany and finally (mercifully) opening their dang expanded space! And, as both a celebration of a goal accomplished and an acknowledgement of the dystopian nightmare they had to endure to get there, they threw a party! More specifically, they busted out a buncha special and/or barrel-aged beer and invited some snack friends over and they celebrated Kafka Day!*

Anyway, they like parties and they like special beer and they’ve got reason to celebrate (details forthcoming) andtheye’ve got reason(s) to commiserate (details withheld indefinitely, for legal reasons), so they’re throwin’ another party! They’ve got a weekend chock full of fun events and a draft list chock full of cool beer and also an extended draft list that’s chocker fuller of even more cool beer and there’s snacks and cookies and beer releases and since Mardi Gras kinda stole their thunder on this holiday they’re gonna celebrate that too (why not) and it’s gonna be a good time!

And what of this Reason To Celebrate, you ask? Well,they’ve listened to your feedback andtheye’re finally (mercifully) gonna have a real answer to one of your most-asked** questions/requests and that answer is cans! Yes! That’s right! They’re entering the Final Frontier of brewery-having and they’re puttin’ some beer in four packs! They’re startin’ off (to be available starting Kafka Weekend) with Key Lime (obviously) and Wellington IPA and then shortly after that (as in, farther in the future than Kafka Day) they’re cannin’ up some Shut Up Kelly and also a cool collab beer called Tres Brujas! So swing though the taproom and grab a four pack or pester your local liquor store to order some or maybe do both.
—

Sun. 3/1
– Girl Scout cookie and beer pairing 12p
– Continued tappings of fancy beer depending on the whims of our production staff 12p

* So named in honor of their local government, not because of any giant-bug-related issues.
** It’s tough to say which is their most frequent FAQ, but this one is on par with “do you have any sours/ciders/gluten free options” or “can I bring my dog into your taproom”