In this blog post we are attempting to include as many local Oktoberfest celebrations as we can. By clicking any of the following images below you can get details on the event, including date, time, food options and ticket information. If you are aware of an Oktoberfest celebration in Massachusetts that we didn’t mention, leave some details or a link to the fest in the comment section below.

To celebrate their first anniversary and the grand opening of their new patio, Naukabout Brewery is hosting Nauktoberfest this Labor Day Weekend. In addition to new beer releases, including a pumpkin and fest beer, there will be stein hoisting, a grain sack toss, face painting, barrel rolling, a sausage toss and a costume/crazy hair contests. EVENT HAS PASSED

At this two day fest held at the Boylston Schul-Verein German Club in Walpole on September 8-9 you can drink the traditional Oktoberfest beers they serve in Munich such as Warsteiner, Spaten, Paulaner and more. And after downing a German feast of bratwurst, schnitzel, and sauerkraut hit the dance floor and Zwiefacher to an Oompah band. There are even medieval sword battles! EVENT HAS PASSED 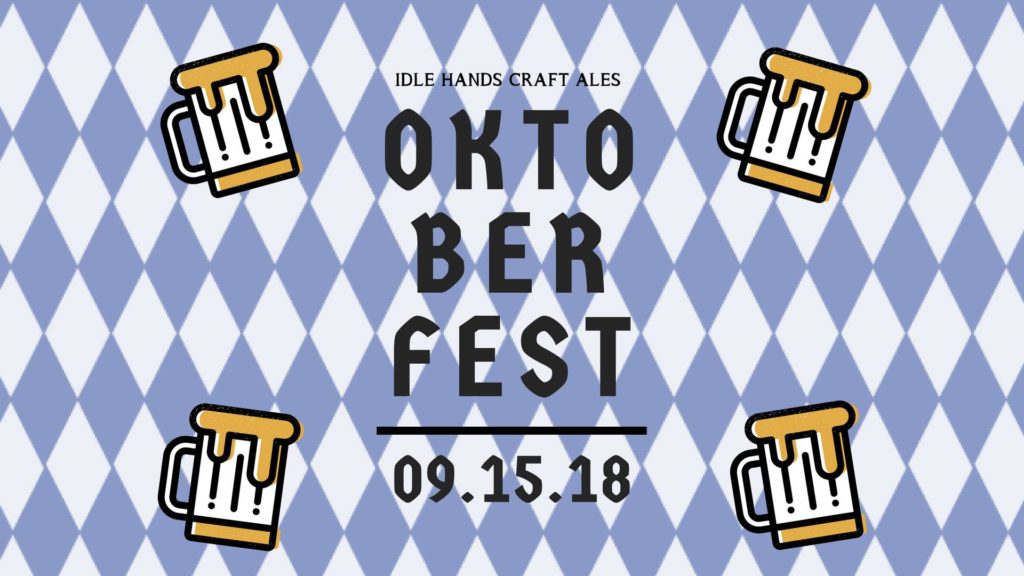 Start the day off with a 5k charity run sponsored by the Malden Lions Club then you won’t feel guilty noshing on vittles from Brato Brewhouse + Kitchen and swilling Idle Hands Brocktoberfest from their ceremonial steins. EVENT HAS PASSED 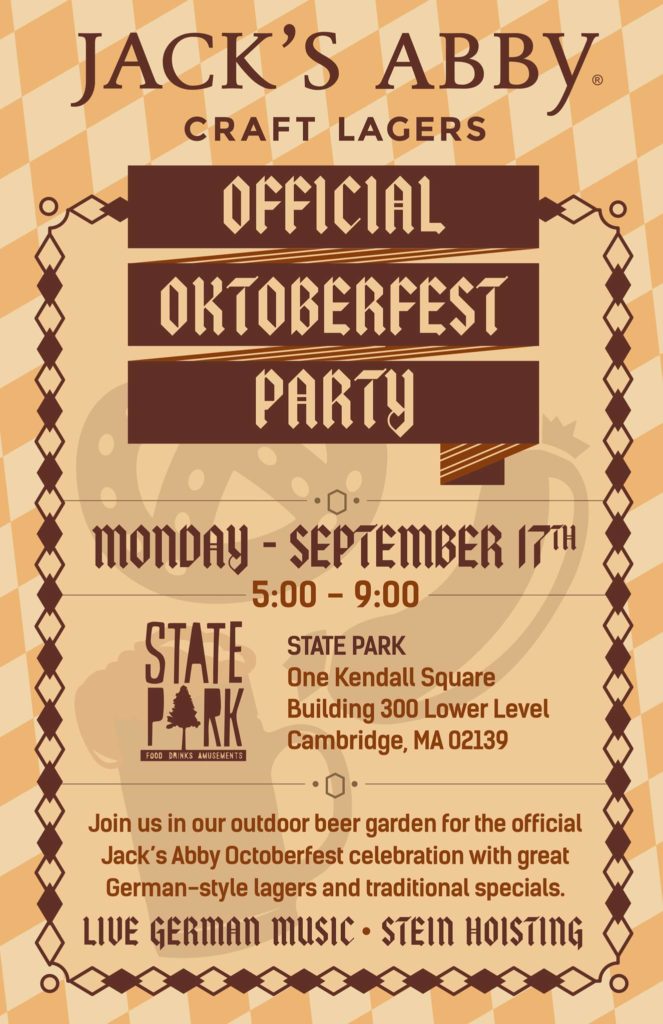 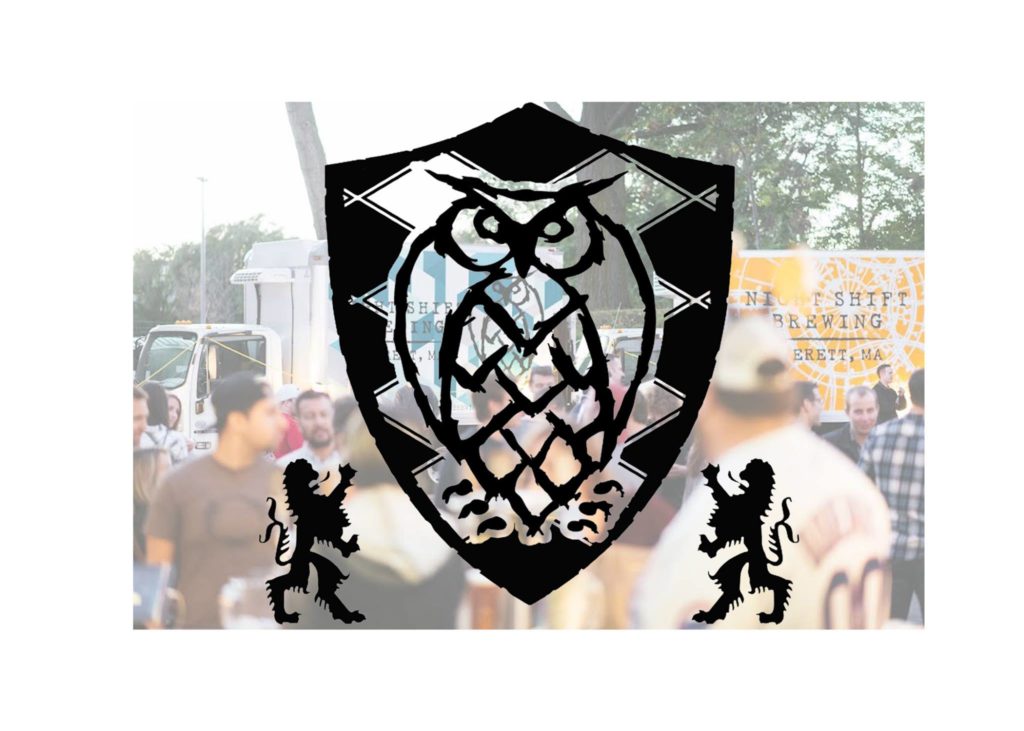 The parking lot at Night Shift brewing will get transformed into a German biergarten where you can raise a stein filled with NSB German-inspired beers in a celebratory toast to the nuptials of King Ludwig and Princess Therese of Saxe-Hildburghausen. EVENT HAS PASSED 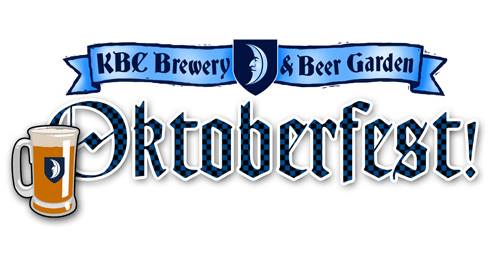 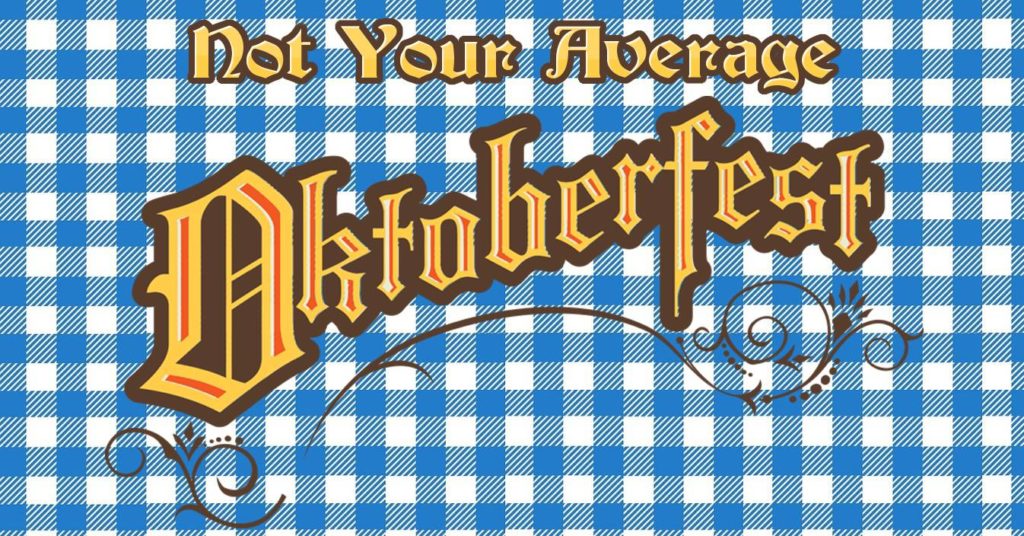 Looking for something slightly different? Berkshire Brewing will be hosting an Oktoberfest at The Southside Grille and Margarita Factory in Gardner, MA featuring their Life on Marzen and apple margaritas. EVENT HAS PASSED 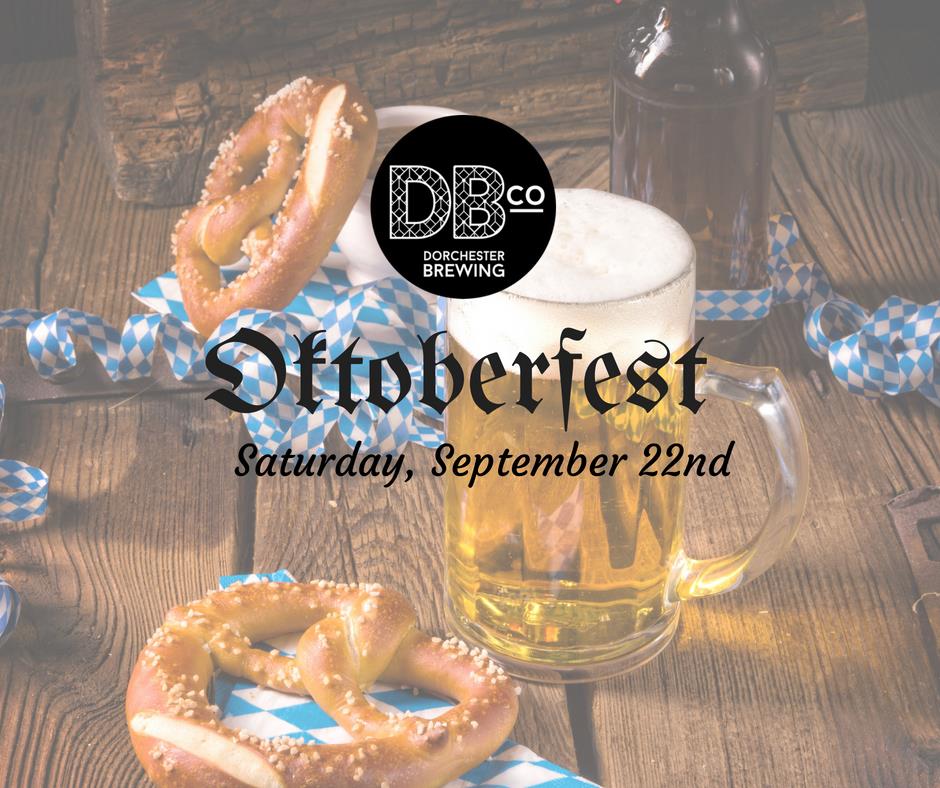 Head to Dorchester Brewing Company for a live German band, fest bier, and plenty of traditional German food/treats while you Schunkeln at communal tables all day long. EVENT HAS PASSED 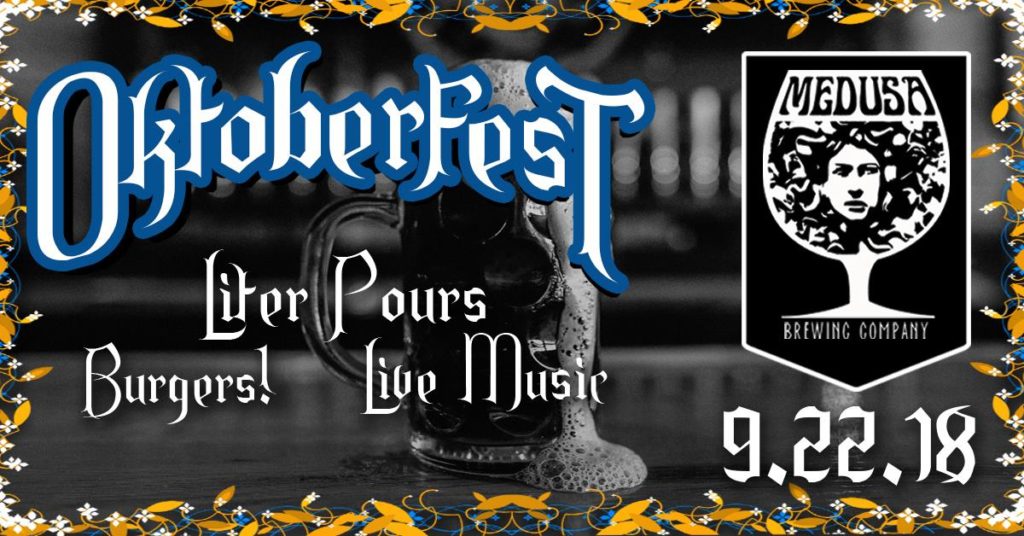 Liter pours! Bring your own liter stein or get a commemorative Medusa stein to sample German-style beers throughout the day. There will also be German-inspired food, live music and festive decor. And did we mention liter pours?!! EVENT HAS PASSED 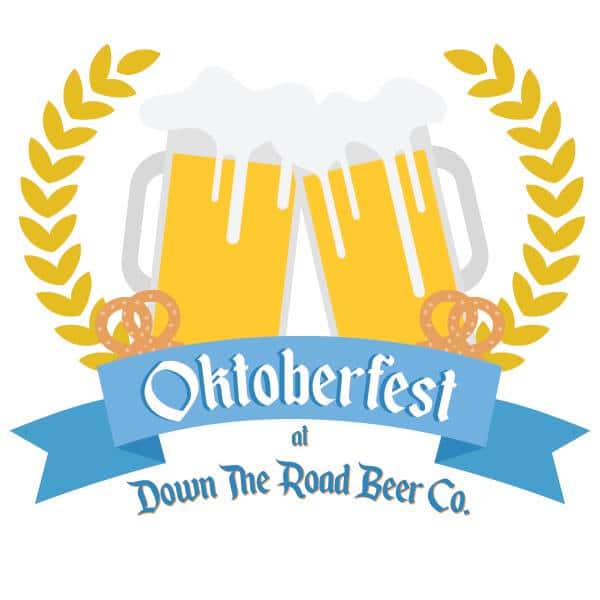 Oktoberfest at Down The Road Beer Company should be a real festive affair as they are encouraging everyone to don traditional fest garb then fill their 32oz stein with DTR fest bier and their belly with scrumptious morsels from multiple Bavarian food trucks. EVENT HAS PASSED 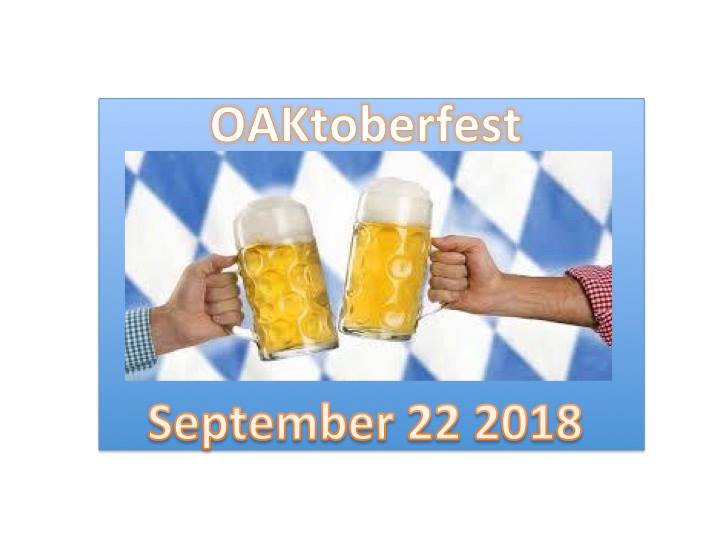 After blessing the first keg of “Oaktoberfest” bier, you can chicken dance to the Mad Bavarian Brass Band, take part in a beer stein hoisting competition and pick hops. Enjoy a famillienachmittag as there is also plenty for kids to do at this family-friendly event. EVENT HAS PASSED 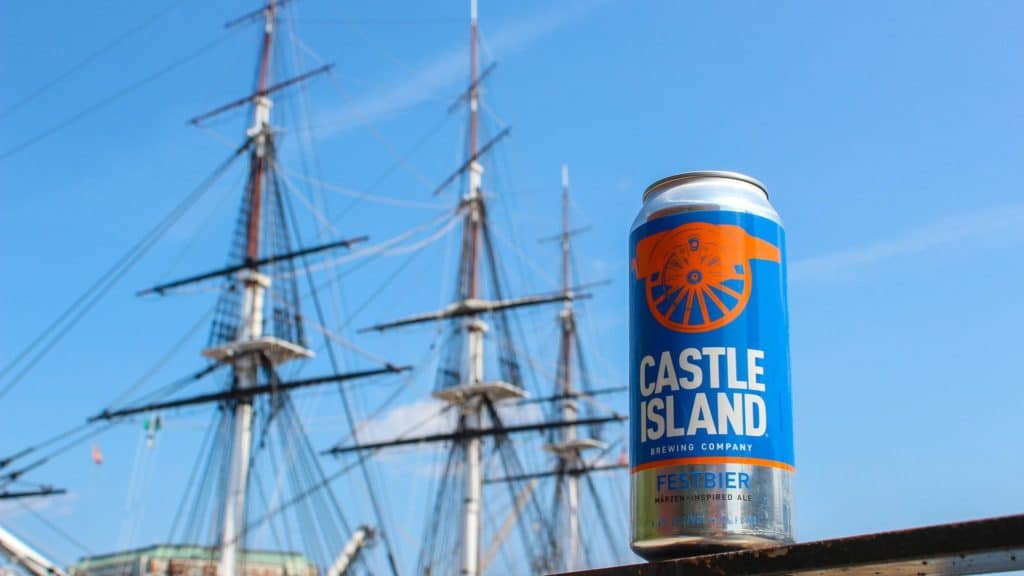 Castle Island is throwing an Oktoberfest bash to mark the return of their Festbier. The event, complete with German fare from Brato Brewhouse + Kitchen, will be held at their beer garden at Constitutional Wharf in Boston. EVENT HAS PASSED 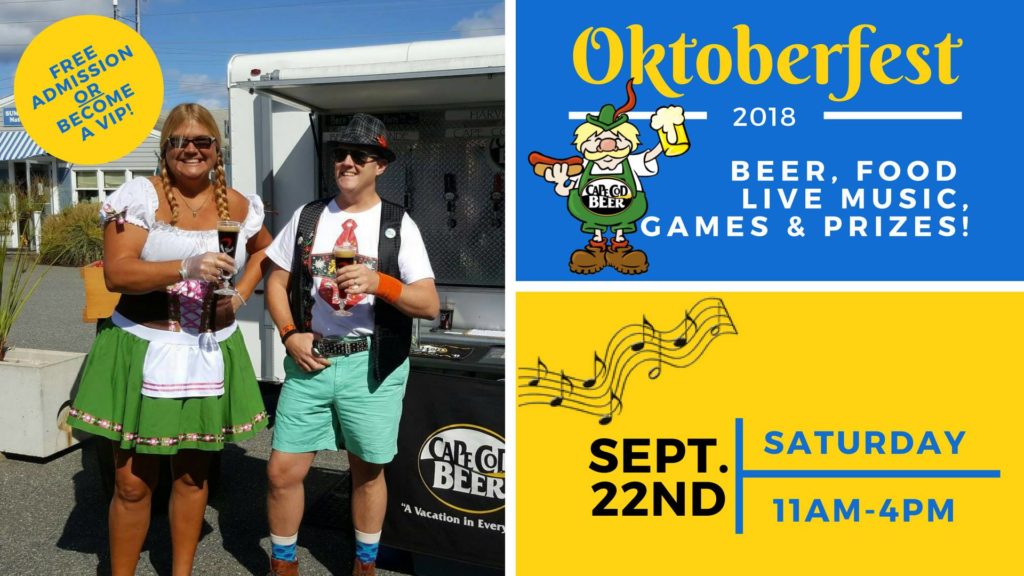 Cape Cod Beer will have beer, brats, games and live music from Funktapuss. Choose their VIP package and get an official event t-shirt, a soft-baked pretzel, a half liter souvenir mug with two tickets to fill it with beer (1 liter total) & access to the exclusive VIP beer line. EVENT HAS PASSED 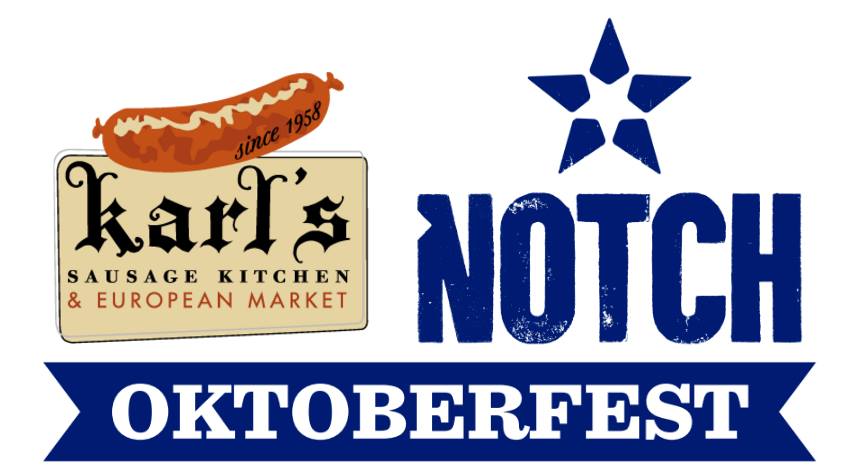 Join Festmeister Chris Lohring at the Second Annual Notch Oktoberfest for a whole bunch of Gemütlichkeit, liters of specialty lagers and traditional german fare from Karl’s Sausage. There are plenty of contests with prizes to partake in as well. Prost! EVENT HAS PASSED 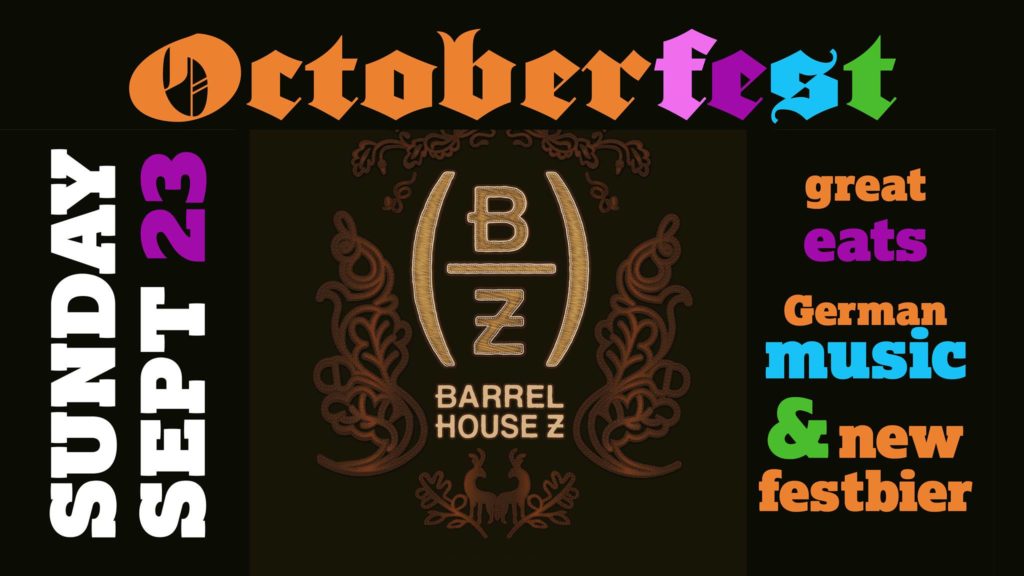 Barrel House Z of Weymouth will be releasing Festbier/Märzen for the special occasion. Accompanying this new beer will be music from Daigle’s Beer Hall Boys and food from Scott Brothers New American Meat Co. EVENT HAS PASSED

Enjoy a traditional German bratwurst lunch and your very own .5L boot from Black Hat Brew Works. These tickets are almost sold out and are only available at the brewery so get on down to Bridgewater schnell and get yours so others don’t experience Schadenfreude at your expense. EVENT HAS PASSED 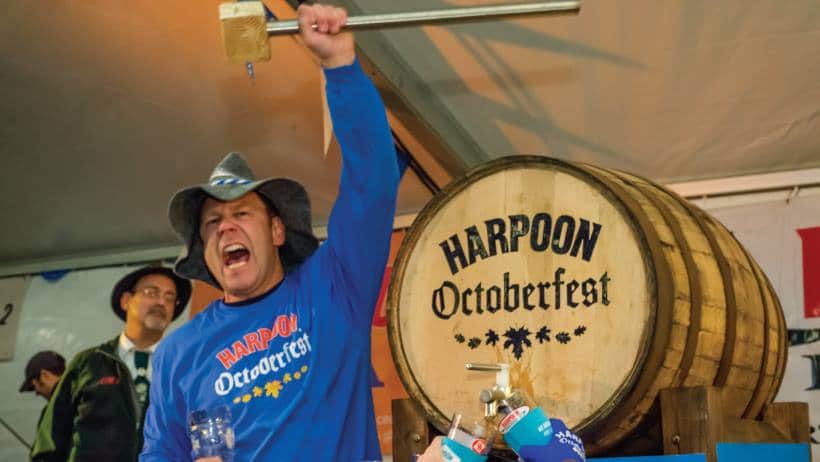 This two-day event at Harpoon is the closet thing you will get in term of size to the Munich extravaganza as thousands of thirsty revelers will flock to the Boston brewery for oompah music, keg bowling and to hoist liters upon liters of beer. Zusammen! EVENT HAS PASSED 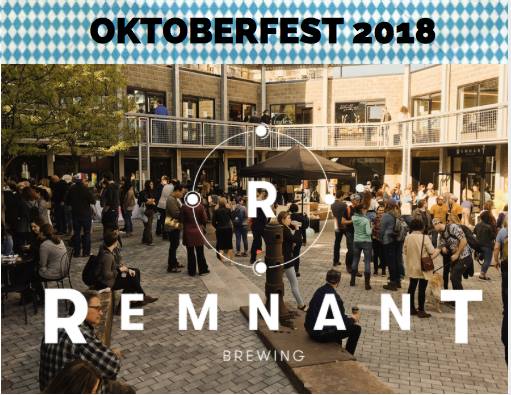 Oktoberfest is taking over all of Bow Market! Hosted by Somerville’s Remnant Brewing, the entire market will be decorated for the fest where you can travel from shop to shop drinking, eating and chanting “zicke zacke, zicke zacke, hoi hoi hoi!” EVENT HAS PASSED 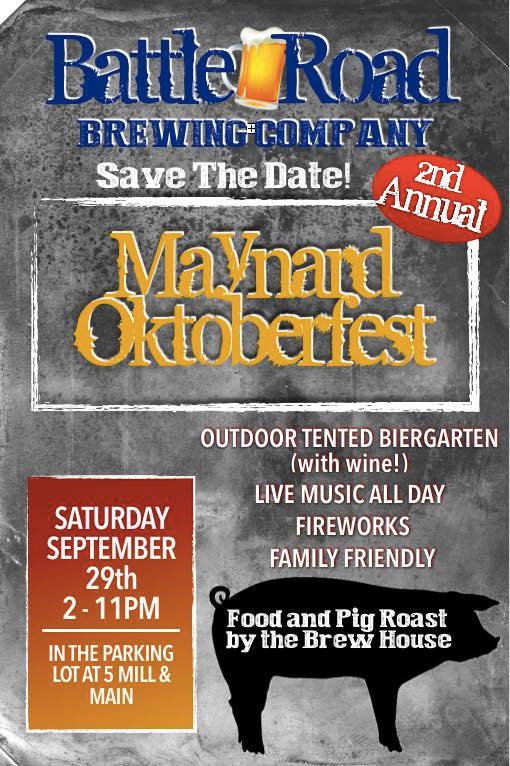 This family-friendly celebration held outdoors at Battle Road Brewing Company in Maynard features a pig roast, live music all day and caps off with fireworks! EVENT HAS PASSED 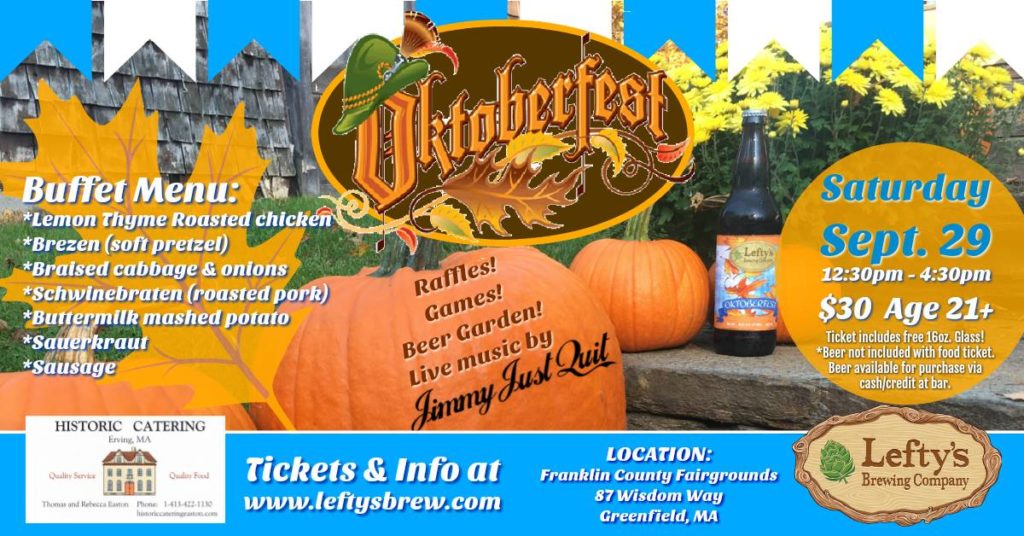 Lefty’s of Greenfield always knows how to party. They’ll have beer, games, raffles and a feast with sausage, sauerkraut, Schwinebraten and much more – save us a Brezeln! EVENT HAS PASSED 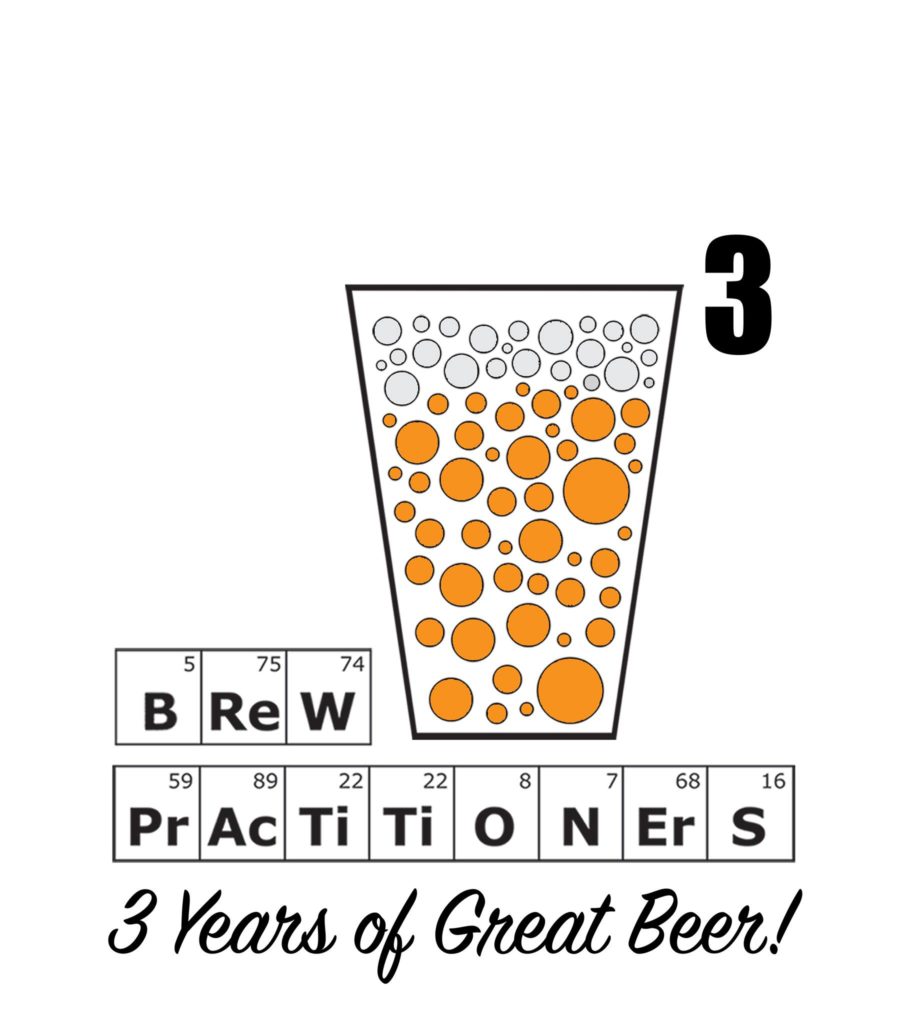 Oktoberfest and a Third Anniversary party collide at Brew Practitioners in Florence. Come celebrate both! EVENT HAS PASSED 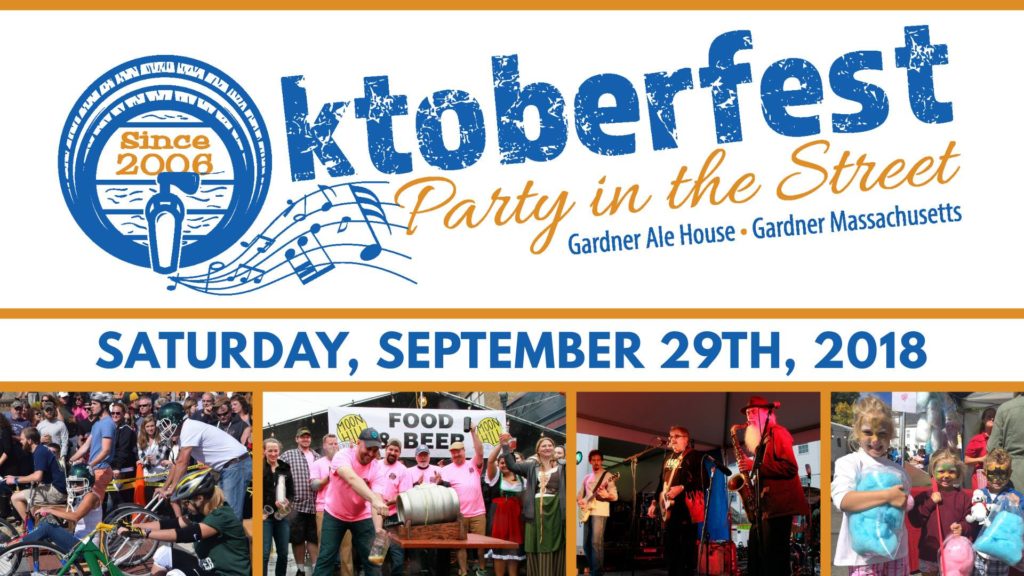 Entering its 13th year, the Garnder Ale House Oktoberfest is one of the longest running fests in the Bay State. Dubbed the “Party In The Street,” this annual event shuts down Parker street so patrons can drink, eat, dance, listen to live music and watch the Chair Luge Race that pits home-made chair/vehicles against one another in a harrowing jaunt to the bottom of the aforementioned Parker Street hill. Eins, zwei, drei and there off! EVENT HAS PASSED 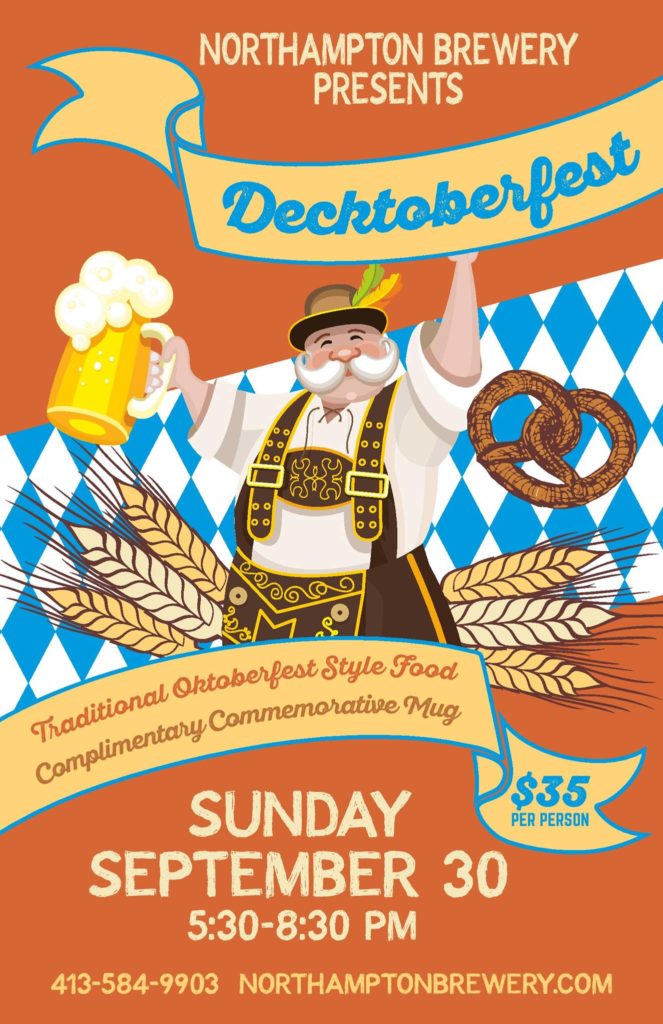 Northampton will create a beer garden on their upper deck and serve German-inspired food and marzen beer! EVENT HAS PASSED 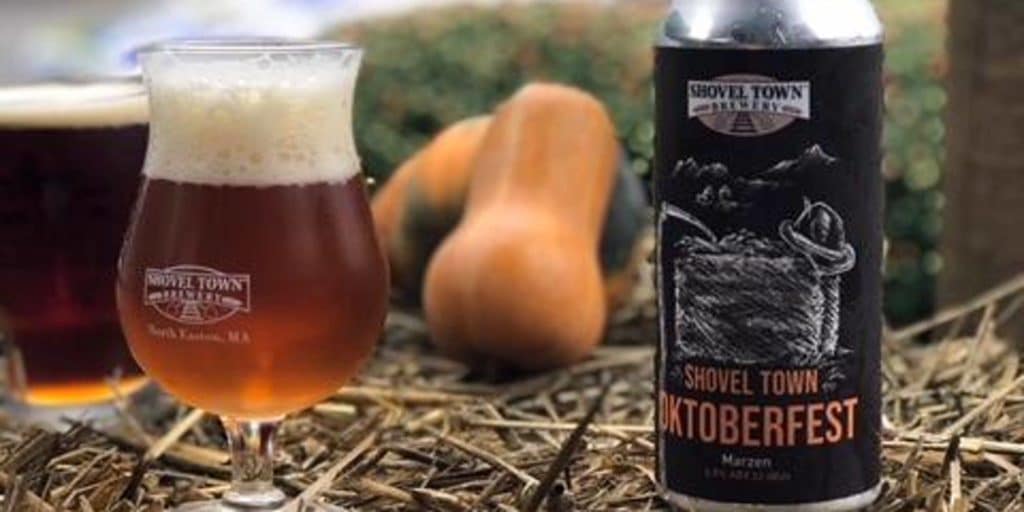 Join Shoveltown Brewing for their 2nd Annual Oktoberfest featuring games, German food and their Oktoberfest and Pumpkins Beers! They also encourage you to bring non-perishable food items as they will be donated along with proceeds from the event to the Easton Food Pantry. EVENT HAS PASSED 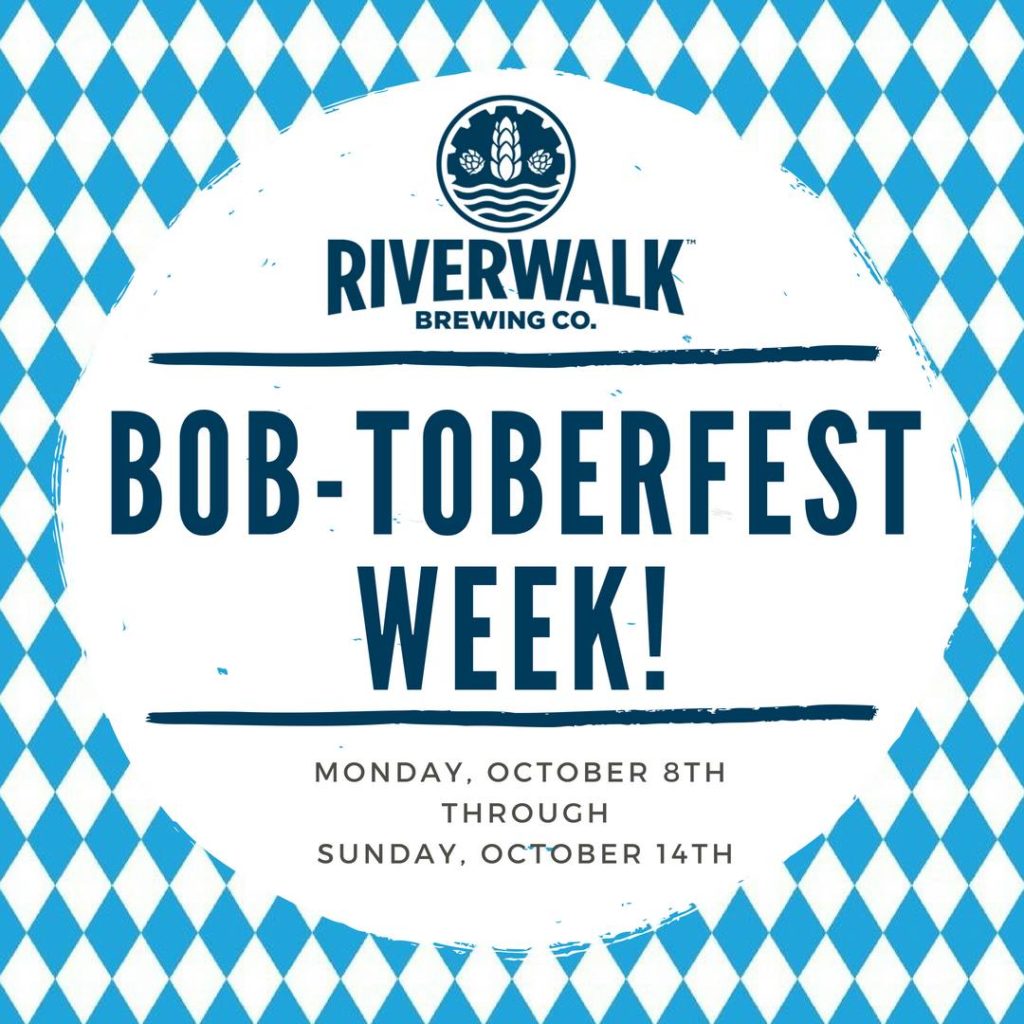 An entire week will be dedicated for festing and to Bob at Riverwalk Brewing in Newburyport culminating in an Oktoberfest blowout featuring the music of The Oberlaendler Hofbrau Band, traditional Oktoberfest foods, games, events, dancing and all around good times! Oans, zwoa, g’suffa! EVENT HAS PASSED 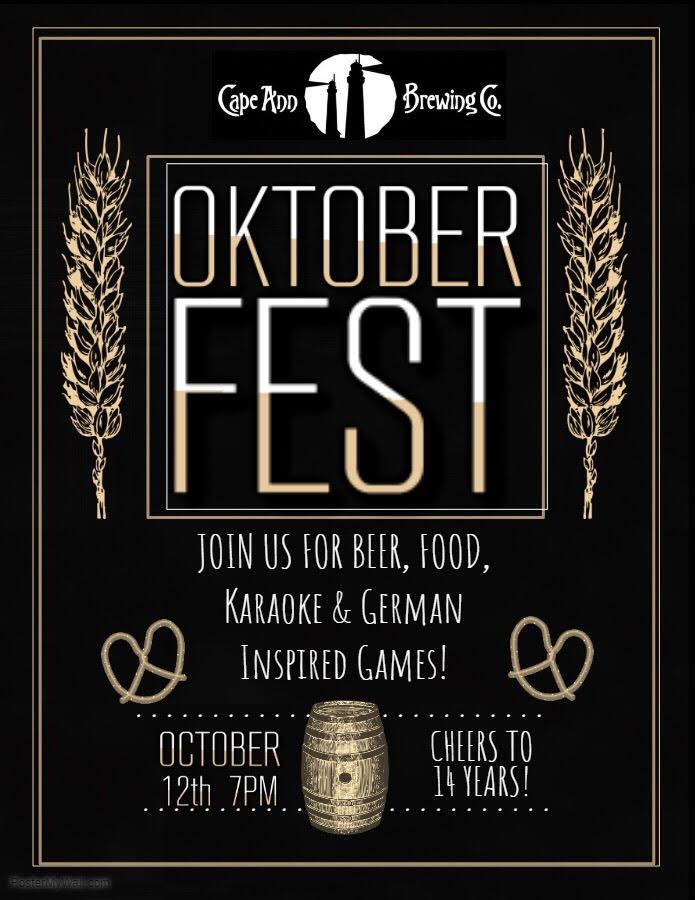 Have a great voice? Then join Cape Ann Brewing for their 14th Annual Oktoberfest and belt out a tune at their karaoke with Crazy Jay Hosmer. May we suggest “Fliegerlied?” There will also be plenty of beer and food. Traditional garb encouraged. EVENT HAS PASSED 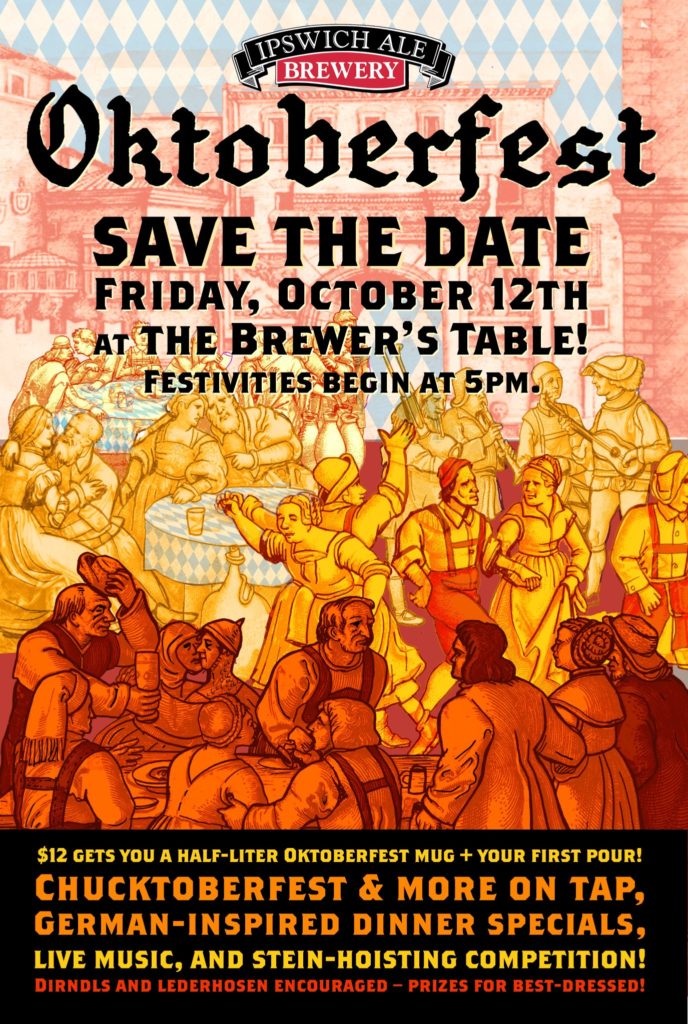 Ipswich Ale will be celebrating Oktoberfest in their restaurant with German-inspired dinner specials, live music, and a stein-hoisting competition. They will also be pouring their Chucktoberfest, a traditional German-style Märzen. EVENT HAS PASSED 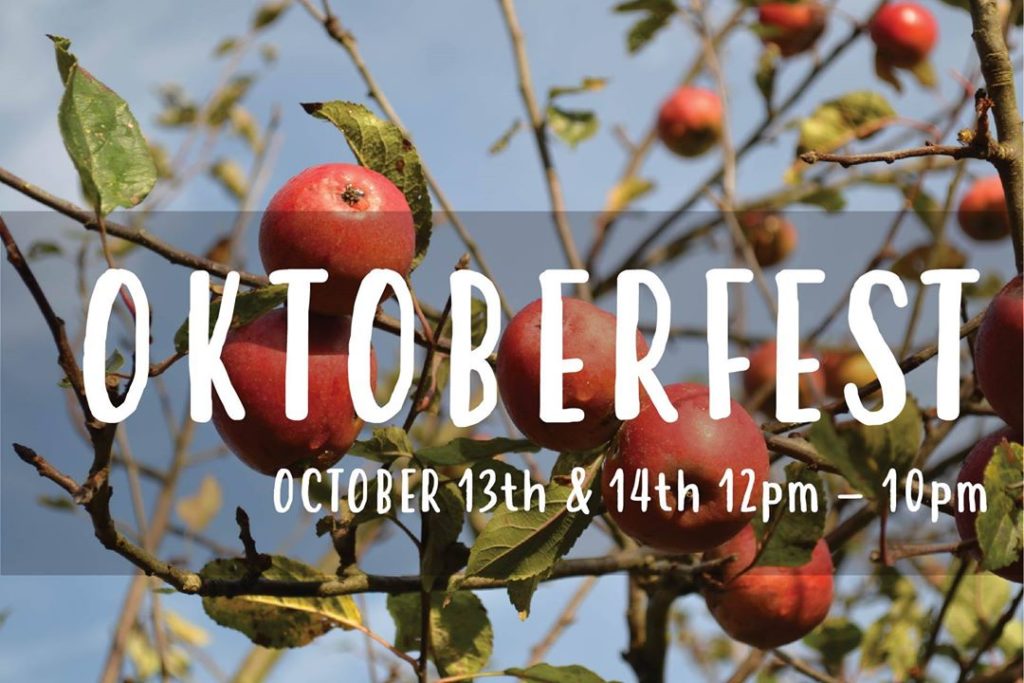 This two-day event, an annual Rapscallion tradition marking the release of their O-Fest seasonal, a traditional German Marzen, will be celebrated with live music all weekend and a bratwurst special on the food truck! EVENT HAS PASSED 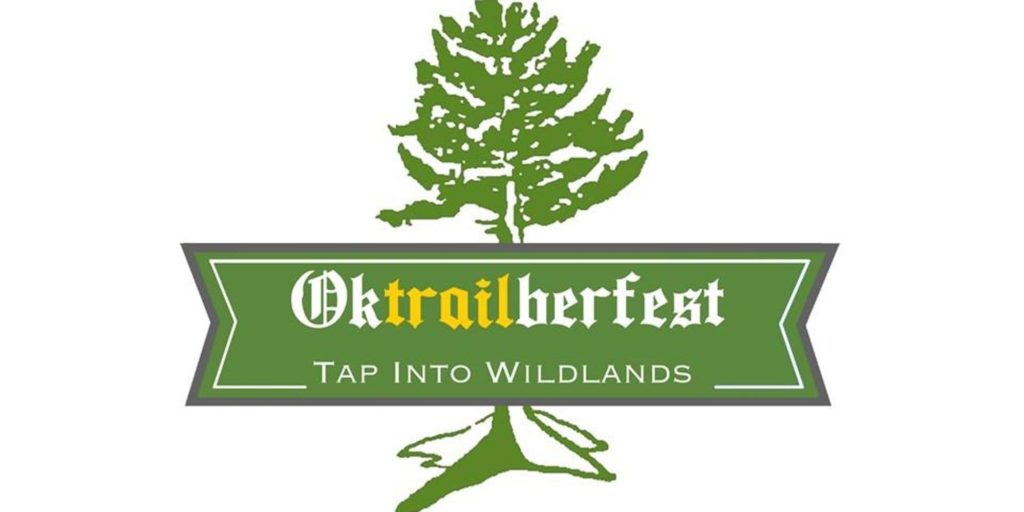 After a hike through the Wildlands, enjoy a German buffet, lawn games, Oktoberfest-style competitions, raffle prizes, as well as Wildlands Trust beer mugs, t-shirts, trucker hats and tasty craft beer from Independent Fermentations and Mayflower Brewing! Advanced registration for the hikes are required. EVENT HAS PASSED

If Oktoberfests aren’t your thing, or you have a fear of Frauleins but still want to drink all the great craft beer the Bay State has to offer, then there are still loads of craft beer events throughout the month of September to attend. Just go to our Mass. Craft Beer Calendar page to find the event that suits you. Also, be on the lookout for our next blind tasting blog that will feature Oktoberfest-styles of bier! And if you see us out and about please come say hello and we’ll say, “Noch ein bier, bitte.”