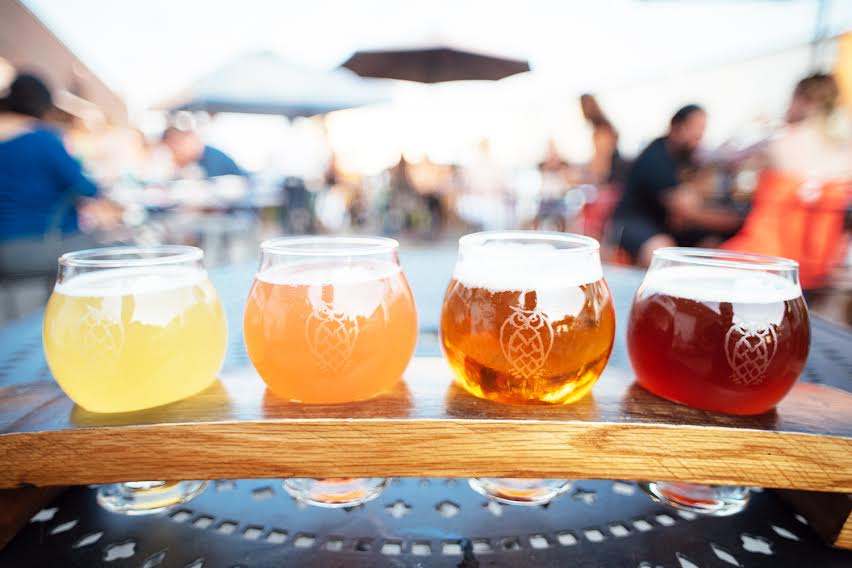 Summer is officially here, break out the blueberry beer, the watermelon wheat, or even a shandy. And where better to enjoy warm weather and cold beer than in the great outdoors. Grab your sunglasses and head for the nearest brewery on our list. Better yet, make a day of it, or plan an evening with friends at one of the breweries that offers amenities along with its great craft beer. Cheers! 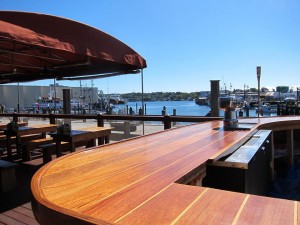 Beer with a view at Cape Ann Brewing.

North Shore craft beer drinkers have long enjoyed their Fisherman’s Brew from the brewery’s spectacular deck which overlooks Gloucester’s working waterfront. This summer, it’s your turn. With an outdoor bar and ample seating, you’ll have a drink in no time. Then you can relax as you watch a Schooner sail into the sunset, or see a fishing boat unloading its catch. Bring your appetite and enjoy the brewpub’s extensive menu, loaded with fresh, local seafood. Open Sunday through Wednesday until 11:00, Thursday to Saturday ’til midnight. 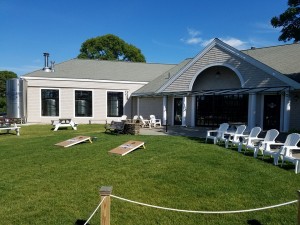 The most recent addition to the Bay State’s burgeoning brewery scene, Hog Island Beer Company in Orleans is the mainland Cape’s only brewpub (Hyport Brewing in Hyannis closed back in 2005), though calling it a brewpub is selling it short. The brewery, restaurant, and beer garden, which features lawn games and dozens of inviting cape chairs, is more like a destination. “Now you have another reason to get off exit 12,” says co-owner Mike McNamara. They’re open seven days a week until 10:00 throughout the summer.

A popular addition to their killer taproom, patrons can enjoy a pint or two along with some eats from the regular rotation of food trucks. And be prepared to pucker up, the first release of their series of Summer Sours debuted last week. If you plan to visit on a Tuesday bring your pooch along for Paws+Pints, hosted each week by a different local organization dedicated to animal welfare and rescue. Open seven days a week, and except for Sunday (when they close at 6:00), they’re open until 11:00. 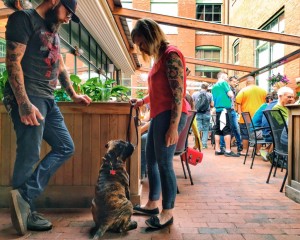 Well known for their amazing beer and raucus festivals celebrating sour, barleywine, or pumpkin beers, CBC also has an extensive patio nestled in the heart of Kendall Square. Sample some unique brews, enjoy dinner, or just people watch (it is Cambridge after all). Regulars can work toward their #CBCBeerYear or go for dollar oysters on Tuesdays, and dogs and their thirsty owners can always enjoy the patio together. They’re open until 10:00 Sunday to Thursday, 11:00 on Friday and Saturday, serve lunch everyday, and offer brunch on the weekends.

Winner of the Valley Advocate’s Best Brew Pub award again this year, Northampton Brewery has been wowing thirsty visitors with its spacious roof deck longer than most Massachusetts breweries have been making beer. Multiple levels and a variety of seating allow you to sit back and enjoy a deckbier, or to sit down and enjoy lunch or dinner from the brewpub’s full menu. A great spot for late night summer beers, they’re open seven days a week until 1:00 AM. 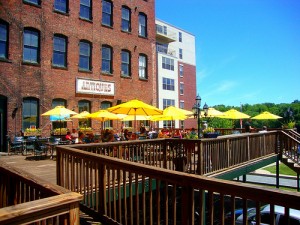 Summertime at The Tap, and the livin’s easy.

Brewing quality craft beer and serving up standard pub fare in downtown Haverhill for well over a decade, summer time at Haverhill Brewery, better known as The Tap, is when the fun starts. That’s when locals and traveling beer geeks flock to their huge deck overlooking the Merrimack River to enjoy the view and hoist summer favorites like the Maize-A-Faire Corn Lager, Intergalactic Acid Berliner Weisse, or the Leather Lips IPA. Open Tuesday to Saturday until 1:00, Sunday until 9:00.

Don’t worry, be hoppy, the popular slogan of Worcester’s first brewery, is even easier to embrace when the warm weather arrives and they open their comfy, spacious patio. Sunshine, couches, great beer, what’s not to love? Knock back a few Blonde Cougars with friends, nosh on a Wicked Twisted soft pretzel, or grab take out from one of the surrounding restaurants. It’s like being at the beach – minus all the pretense and high prices. Open Sunday until 7:00, Tuesday & Wednesday until 8:00, Thursday through Saturday until 9:00.

Brew Practitioners – Make A Day of it 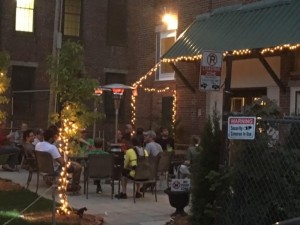 A bit of Beer Garden Heaven in Northampton.

Academic, artistic, musical, and countercultural hub of Western Mass., it’s not hard finding a reason to visit Northampton. Now you can add craft beer mecca to the list. With Brew Practitioners, the newest addition to the Northampton-Easthampton region, the vibrant beer destination now has six breweries, not to mention its own bus tour, Ale Aboard. The new nano brewery is both the departure and drop off point, and is often pouring as many as 10 brews, so pull up a seat on their patio and enjoy a pint before and after the tour. Tours run Thursday, Friday and Saturday and the brewery is open Wednesday through Sunday.

The first brewery to open on the Cape & Islands, Cisco is quite simply THE place to be for afternoon drinks on Nantucket. And it’s not just for beer geeks: along with the brewery you’ll find a winery and distillery. Located just 15 minutes from down town, thirsty visitors frequently bike over or take the free shuttle. Once there, plan to stay a while. As well as drinks and open air seating they offer tours, host live music, entice you with a raw bar, and have a variety of food trucks. If there’s one shortcoming, it’s that they close too early, usually by 7:00.

Kretschmann Beer Garden – Make An Evening of it

With all there is to do at their 1,600-square foot beer garden in downtown Webster – sit and chat by the fire pit, play some corn hole, or enjoy the live entertainment – you could spend the whole summer at Kretschmann. Sip one of a dozen brews on tap, including guest beers, or take advantage of their full liquor license and try some locally made craft wine, mead, or spirits. Located behind the brewery and along the Webster River Walk, they’re open Wednesday & Thursday until 9:00, Friday & Saturday to 11:00. They don’t serve food, but you can bring your own.

New City Brewery – Make An Afternoon or Evening of it

It’s hard to beat Easthampton’s newest nano brewery if you’re looking for the quintessential summer evening scene. Their unique flagship offering, an alcoholic Jamaican-style ginger beer, is perfect for the warm weather. Enjoy it in their outdoor beer garden, a growing trend in the area, while listening in on the Brewmaster’s Jazz Series. “The idea is to combine things people enjoy,” explained brewmaster Sam Dibble, “great beer, great music and drinking outside.” There’s even great food, thanks to the food trucks. Open Sunday until 7:00, Wednesday & Thursday until 9:00, Friday & Saturday ’til 10:00.

Bad Martha Farmer’s Brewery – Make A Day of it 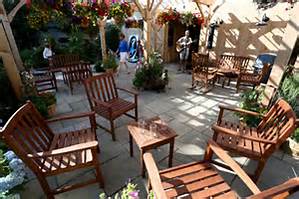 Get Bad, or just enjoy the chill brewery vibe.

Modeled after a Napa Valley winery tasting room, Bad Martha Farmer’s Brewery captures the essence of island life, but with much better beer. In addition to a dozen or so beers, they also serve cheese plates and charcuterie boards, as well as other snacks. Outdoor games and live music on weekends adds to what they describe as a “chill brewery vibe.” Located on Main Street in Edgartown (you’ll need transportation if you’re taking the ferry over for a day trip), they’re open noon to 9:00, July through Labor Day. Plenty of time to Get Bad. 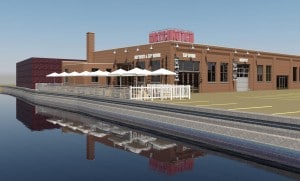 Craft beer drinkers have long been familiar with Notch, the first brewery in the U.S. to focus exclusively on session beers (usually no more than 4.5% ABV), but starting next month fans will be able to spend the afternoon kicking them back at the new brewery’s 2,000-square foot European style beer garden. “Having outdoor space was one of our highest priorities,” old school brewer Chris Lohring explained about the location in downtown Salem, “having it along the river is just a bonus.” They’ll be open Wednesday through Sunday to 11:00.

Know by many for their amazing Octoberfest Street Party, Gardner Ale House and its loyal patrons recently celebrated their tenth year of brewing great beer, serving tasty food, and providing free live music five nights a week. Summers in the Chair City got even better three years ago when the brewpub built a downtown oasis deck with seating for 42. They’re open from lunch time until 10:00 seven days a week and serve brunch on Sundays. 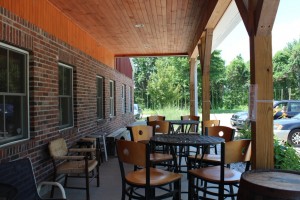 Refreshing beer and a view of the Mountains.

Easthampton’s Fort Hill Brewery is must visit for Western Mass. beer lovers in the summer time, combining classic German style brews and outdoor porch seating with views of Mount Tom. While you’re there, take a tour, do some tasting, or just sit and admire the organic hop garden while you enjoy the live music Thursday through Sunday. If you’re a dog lover, they’ll be hosting a Barks & Brews fund raisier on July 31. Open Thursday & Friday 4:00 – 7:00, Saturday 2:00 – 8:00, Sunday 2:00 – 6:00.

If you’re heading to the Cape this summer (and who isn’t) make time to visit this Hyannis brewery and work on your tan while sampling brews in their beer garden. Grab a pour from the beer trailer while you listen to one of the local musicians and snack on a Cape Cod Dawg from their food truck. On Friday afternoons they host Farmers Market meets Happy Hour with live music and lots of fun. They’re open Monday through Friday 10:00 to 6:00, Saturdays 11:00 to 3:00.

Navigation Brewing – Up and Comer

There’s a lot to like about Lowell, especially their emerging craft beer scene. Navigation Brewing, a barely two-year old nano, is quickly becoming the centerpiece. They recently opened a courtyard space with a hop vine climbing the old mill walls, picnic tables, and a corn hole game. Along with their tasty brews, you can often feast from food trucks like Phoenix Rising Pizza. Future plans include outdoor fireplaces and a small stage for live entertainment. For now, they’re only open Thursdays from 4:00 to 9:00 and Fridays 5:00 to 9:00. 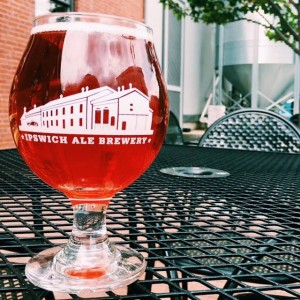 Opened back in January, Ipswich Ale’s new brewpub, the Brewer’s Table, should already be reason enough to head to the North Shore’s oldest brewery. Now, with the grand opening of their new patio last week, there’s really no excuse. Bask in the sun, or under the stars, treat yourself to some of the region’s famous clams or other seafood, and wash it down with one of their summer flights, which includes their kettle soured ale, Cranberry Beret. They’re open seven days, until 11:00.

Not far from some of the North Shore’s best beaches, Newburyport Brewing’s taproom has long been a popular spot for parched beach goers to quench their thirst. During the summer they host Grill & Brew Weekends Friday through Sunday with Port City Sandwich Co. flipping burgers on their patio. Relax with some local live music, then grab a six or four-pack of cans for the rest of the weekend. They’re open Thursday through Sunday until 9:00, but close at 6:00 on Sundays.

You may be able to add Jack’s Abby in Framingham to the list later this summer too. Their patio hasn’t yet opened, but it will feature full service and accommodate about 35 at picnic table style seating when it does. 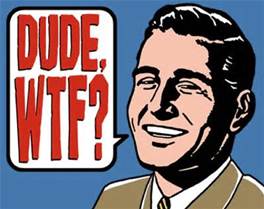 If you think we have egregiously left a brewery with a cool patio or deck off our list, let us know about it with the “Submit A Comment” button below. We love feedback almost as much as craft beer.