“Don’t Call it A Comeback, They’ve Been Here For Years”

For those of you old enough to remember LL Cool J before he became a TV star on NCIS, you may recall the above song lyric from his hit, Mama Said Knock You Out. That was back in the early 1990s, around the same time brewers at Sam Adams and Cambridge Brewing Company started experimenting with a technique that’s recently become all the rage, barrel-aged beers. Not to get all beer snobby on you, but the so-called trend has actually been around for a couple of decades, and not surprisingly, Massachusetts breweries have been at the forefront of the movement all along.

Most agree that Greg Hall of Goose Island deserves credit for being the first in the U.S. to use wood barrels to age beers. He first poured his experimental brew, Bourbon County Brand Stout, at the Great American Beer Festival (GABF) in 1992. It quickly inspired a new direction in brewing, a genre even, that has since become an officially recognized style, and a popular one at that. 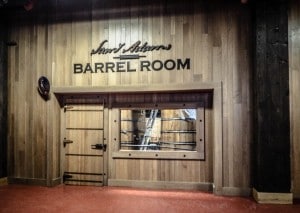 Jim Koch and his Boston Beer Company were among the first American brewers involved in the modern day barrel aging movement.

It wasn’t long before a couple of the Bay State’s most innovative breweries caught the barrel aging bug themselves. Sam Adams, which started dabbling around the same time as Goose Island, grabbed headlines just two years later when Jim Koch unveiled his 17.5% ABV Triple Bock, the strongest beer ever brewed at the time. The debut of his Utopias shocked the craft beer world again in 2002 with its inconceivable 24% ABV. The brewery launched its Barrel Room Collection a decade later with Kosmic Mother Funk, a unique Belgian ale aged in Hungarian oak tuns.

Across the river another unique collection of barrel-aged beers was being developed by brewmaster Will Meyers at Cambridge Brewing Company. The benefactors of extra vessels from Jim Koch, CBC began their own beer aging program in 1998. The first project Meyers undertook was a uniquely blended beer called Benevolence, aged in barrels that had previously contained Sam Adams Millennium. It took silver in the experimental beer category at the 2004 GABF, right behind Sam Adams Utopias, which won gold. That same year, Meyers created the first Solera Beer System in the U.S. and christened it by brewing one of the first American sour ales, Cerise Cassée, a multi-fermentation wild ale made with sour cherries.

By 2014 CBC’s beer cellaring program had become so popular they decided to expand. In collaboration with nearby Mystic Brewery, they bought a second brewing system and installed it at their partner’s Chelsea brewery. The deal allowed Mystic to fully brew its award-winning saisons on premisses and allowed CBC to start distributing bottle-conditioned offerings of its popular barrel-fermented and wild ales. Recently, Meyers was honored by the Brewer’s Association with the prestigious Russel Schehrer Award, given annually for Innovation in brewing.

Fast forward to today, and the Bay State is again at the forefront of barrel-aging innovation, only this time it’s not a brewery leading the way, it’s an Italian restaurant. At the barrel room at Eataly Boston’s new Terra restaurant barrel master John McKusick oversees the first-ever Rack AeriAle, a state-of-the-art barrel-aging system that dispenses draft beer on both C02 and nitrogen. “It’s a dream job” admits the former wine buyer and beer director, who now offers craft drinkers the unique opportunity to get a finished beer poured straight from the barrel. 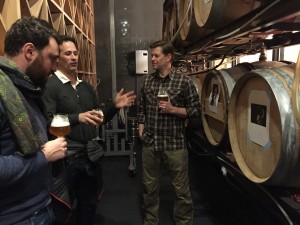 “Putting a finished beer into new barrels gives it a secondary aging, and allows it to acquire even more aroma and flavor,” explains CBC’s Meyers, whose Brett Conspiracy was one of the first offerings from Terra’s cutting-edge system. “It’s not like a typical barrel-aged beer” he adds, “It’s continuously changing. The same beer will taste different depending on when you drink it” [because of the length of time its in the barrels]. How the beer gets dispensed will also impact the drinker’s experience. That’s a decision made by McKusick, who constantly tastes beers throughout the aging process and then improvises on the right combination of CO2 and nitrogen for pouring. “John’s like a DJ” says Dogfish Head’s Sam Calagione, the system’s designer, “he’s just working with gasses instead of music.”

If the Rack AeriAle has a single weakness it’s the system’s limited capacity, just 15 barrels, which means only three beers can be aged and served at any given time. Then again, those 3 beers will taste different each time a patron orders them. CBC’s Brett Conspiracy is one of a handful of local brews that will be in regular rotation, Trillium’s Permutation series is another.

Roll Out the Barrels

There’s no shortage of barrel-aged brews for Bay State craft beer drinkers these days. More and more, breweries have been rolling out the barrels in recent years. We estimate that at least half the state’s commercial beer makers, some old and some new, include at least one barrel-aged brew as part of their annual roster. Some, like Weymouth’s Barrel House Z or Jack’s Abby offshoot Springdale Beer in Framingham, even specialize in the style.

Former Harpoon brewer Russ Heissner was so stoked about the barrel aging movement that he returned to the industry last year after a two-decade hiatus. His approach at BHZ is to brew small-batch, barrel-aged beers, often in collaboration with other brewers. Less interested in perfecting flagship beers than the typical brewery, they aim to make unique beers that are only available for a limited time, then move on to the next one. The barrels Heissner uses come from Boston’s Bully Boy Distillers, and brewing collaborations have ranged from Harpoon’s Doug McNair (Sunny and 79°) to South Shore home brewer Joe D’Auria (Jane Rae’s Amber Ale). 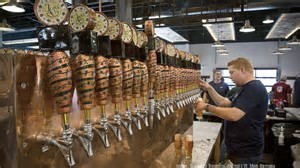 The variety of sour beers at Jack’s Abby and the adjacent Springdale Barrel Room will make any craft beer drinker want to pucker up.

Another brewery that committed big time to the increasingly popular barrel-aging style is Jack’s Abby, known in the past for their ultra-successful lagers. Their initial foray into the barrel scene started in 2012 when they began producing creative barrel renditions of their Framinghammer Baltic Porter (brewed lager style), which featured everything from bourbon or brandy to peanut butter & jelly. Within a year they were also brewing sours, so many that before long they needed more space to accommodate all the barrels. An idea was hatched.

In December of 2016 they opened the Springdale Barrel Room and launched a new brand that focusses on sours beers, ales, and other experimental brews. The enormous space is on track to become the largest barrel-aging program in New England, and recently announced a blend-your-own series in which participants get to taste samples straight from the barrels before building a blend that will be bottle conditioned for take home later. The brain child of general manager Joe Connolly, he and barrel master Matt Cohen hope to “drop some knowledge” on brewery visitors concerning the alchemy behind the beer.

It May Be Trending, But It’s Not A Trend

Don’t be fooled by the seemingly trendy nature of their recent surge in popularity, barreled beers are here to stay. No, converts aren’t under some sort of spell. The only sorcery at work is that if you’ve tasted one barrel-aged beer, then you’ve tasted one barrel-aged beer – you certainly haven’t tasted them all. If your palate hasn’t caught on just yet, keep at it, breweries from all over the state are finding their own delicious niches. Unlike some traditional styles, barrel-aged beers offer a myriad of possibilities, utilizing everything from the barrel’s distinct wood character to the microorganisms that live within it, to the former inhabitants of the vessel (bourbon, wine, even another aged beer). 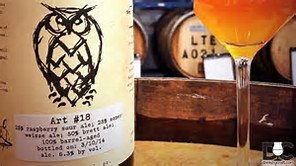 “The barrel-aged beers are the most interesting ones we get to make,” explains Night Shift head brewer Joe Mashburn, who oversees the brewery’s collection of some 350 barres. “It’s a scientific approach with most other styles, barrel-aged beers are on the other end of the spectrum. You never really know what you’re going to taste from a new barrel, and that’s one of the coolest aspects of it.” Another cool aspect of Night Shift’s barrel program is the spontaneous culture they’ve been developing in 40 of their oak barrels. “It’s showing tons of promise,” says Mashburn, who plans to blend several of them together to create a lambic-like beer. “It’s pretty exciting to work with yeast that no one else has access to.”

Unique beer aging conditions can come from the environment outside the barrels as well, and it’s an opportunity that a pair of Cape Cod’s oldest breweries have been taking advantage of for years. Cisco on Nantucket and Cape Cod Beer in Hyannis began their barrel programs a decade ago, before it was fashionable, the former with a series called The Woods and the latter with an annual release called Christmas in July. Both breweries have long utilized barrels from the Cisco Brewers Triple 8 Distillery, including its Notch Whiskey. Additionally, Cisco has used barrels from Nantucket Vineyard while Cape Cod Beer has employed barrels from Truro Vineyards. 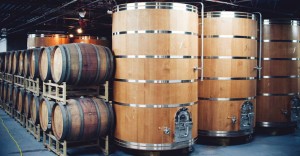 Foeders, like these at Trillium’s Canton brewery, are large wood barrels that allow a slow ingress of oxygen into aging beer, allowing it to mature and develop gradually.

Two hundred miles away in Greenfield, Lefty’s founder/brewer Bill Goldfarb looks after a variety of beers he’s aging in bourbon barrels, often for 10 to 12 months under temperature controlled conditions. He started with a single Jack Daniels barrel back in 2011 and has been hooked ever since. “You just pull so many great flavors out of barrels,” he contends. His current experiment involves aging his Scotch Ale in Scotch barrels for the first time.

Plenty of others are experimenting too. Somerville’s Aeronaut Brewing has its “sour universe” of beers featuring microbes cultivated in their own lab, contract brewer Clown Shoes recently purchased 10 new bourbon barrels that had maple syrup aging in them, and Exhibit ‘A’ in Framingham filled two rye whiskey barrels with imperial stout for a beer they’ll release this fall as part of the Black Ale Project. Even breweries without barrel aging capabilities, like Cold Harbor in Westborough, have figured out ways to impart wood character into their beer. Founder/brewer Brandon Heisler soaked oak chips in bourbon and used them to give oak flavor to his Hot Smoke Porter. “We plan to have barrels one day, though,” he assured us.

More Bay State brewers dream of a proper barrel aging program as well. Such longing was a big part of JC Tetreault’s decision to open a second Trillium brewery in Canton, now home to hundreds of barrels and even a few folders. Medusa in Hudson is another brewery eyeing an expansion, and has talked about growing their barrel program to incorporate more sours. And we understand that Tree House plans to build on its limited but successful forays into the movement by slowly converting its current Monson brewery into a barrel aging facility when their new brewery opens in Charlton this summer. “We’ve had a lot of knowledge bottled up for a few years, and we can’t wait to let it out,” says head brewer Nate Lanier. “We think what we’ve learned can really help us create some special beers in the not too distant future.” 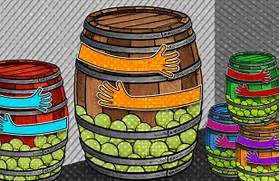 Even if you agree with “Prickly Pete”, a fan of street music, wrestling and beer according to his Twitter page, and says that “barrel-aged beers are the biggest hit-or-miss style out there,” their meteoric rise in popularity among brewers makes it likely that more and more of them are in our future.

If your local brewery has embraced the barrel-agiing movement and we didn’t mention it in our story, let us know in the comments section below. And cheers.